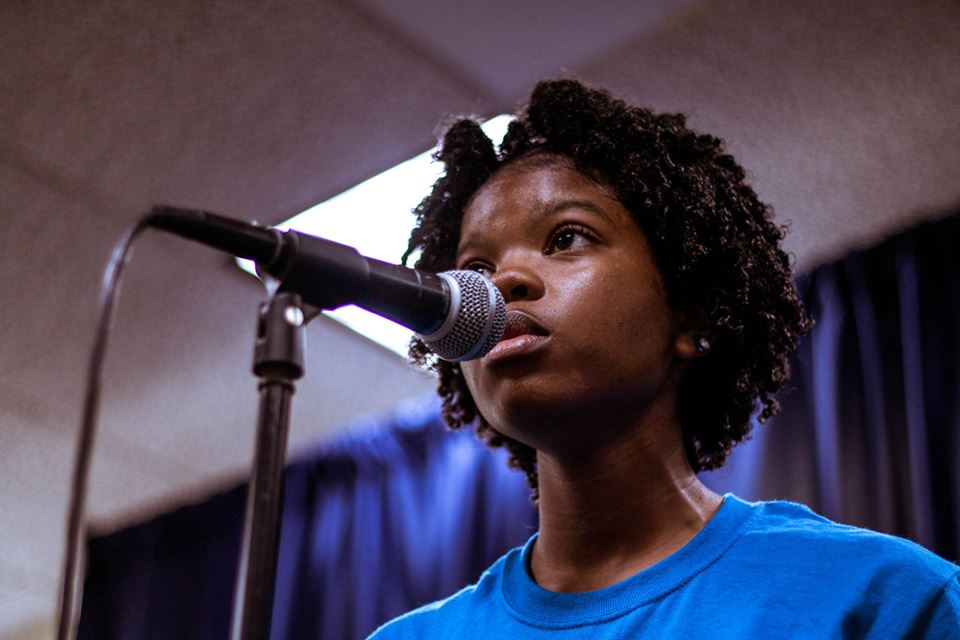 Youth Radio asked 18-year-old poet, Nykearra Bush from breathe INK in Charlotte, North Carolina, to weigh in on the killing of Keith Lamont Scott, a black man who was fatally shot by a local police officer, and whose death sparked protests across the nation.

The average heart beats about 80 beats per minute.
A constant cadence of complex crimson coursing through body.
We be brown skinned boomboxes
A ticking time tempo
This beat keeps us alive.

My brother is different
His heart is a brilliant beating brown boy at the edge of the dance floor.
My brother has a heart arrhythmia.
Causing his ribcage to shudder to the rhythm of over 100 beats per minute.
My brother’s heart be too live for his body.
He is no human. Just old school hip hop wrapped in flesh and bone.
You can catch him dancing in grocery store aisles and parking lots and cemeteries.
As if to say “Do you see me?”
Sometimes it bothers me.
The way he makes himself visible.
Sometimes I tell him to tone it down.
Worried someone will take offense and ask him why he’s dancing. As if he needs a reason.

My brother dances like this is survival.
This beat keeps him alive.
He bends but never breaks
Popping and locking as if trying to animate a body that has been dead since birth.
Cause don’t you know black babies be stillborn at birth.
Be dead man walking, or dancing.

Have you ever heard the quiet right before the beat drops?
Ain’t it humble? Don’t you think it merciful?
An angel feather whisper of gospel in a beat so braggadocios.
Have you ever heard the silence right after a black body drops?
Like guilt so blatant as dried blood on pavement.
Ain’t it righteous? Don’t you think it shameful?
How Jordan Dunn was shot cause his music was too loud. Cause his skin was too loud. Because he refused to stop dancing.

How could he when this music be infectious?
Like the throb of that bass line.
Paralyzed and broke spine
They said Freddy Gray’s death was a homicide yet nobody killed him.
They didn’t know that he was killed by the rhythm.
Split himself like he was bboy and this was just a necessary break to keep up with the beat.

Alton Sterling wasn’t just a man.
He was a dealer.
Slinging CDs to cure the itch, the illness, the throbbing
Prescribed by Dr Dre himself.
Like F–k the Police is just another lyric to dance to.
Like some boys last dance is to the beat of bullets breaking bone and body.
Pumping heart, pump up the volume to cover up the noise of gunshots.
There’s no trace of a pulse when the pulse of the music is too loud to hear over.

My brother dances like
This beat is to die for.
To bleed for.
To be seen for.
And They all love to see him dance
Turn him into puppet
They command him
Like wind up toy
Beat boy,
Break boy,
black boy be robot
Programmed for gunshot.
Everybody waiting for the bass to drop,
Or the beat to drop,
Or the boy to drop,
Or the blood to stop.