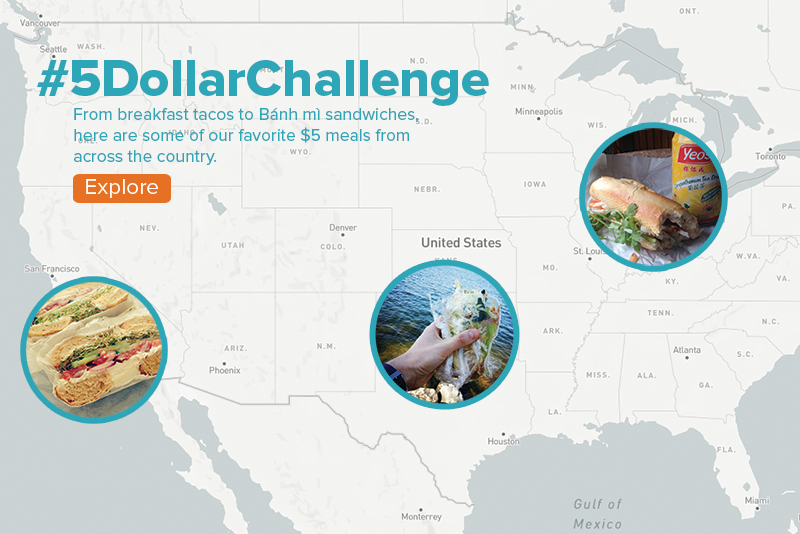 Young people want meals that are quick — and also fresh and healthy and interesting.

But can they get all of that for less than five bucks?

Three weeks ago, Youth Radio and NPR asked you to send in pictures of the best meals you can purchase for five bucks or less.

Based on the submissions to the #5dollarchallenge, we’re happy to report that a Lincoln can indeed buy quite a lot of deliciousness.

Check out Youth Radio’s interactive map for some of your favorite meals from every region of the U.S.

While we applaud those of you who sent in photos of meals you prepared at home with ingredients that cost less than $5, for this map, we chose pre-made meals you can pick up on the fly.

$5 Gets You Very Vegetarian Deals

@youthradio Although I'm not vegan, I love the variety of healthy, quality, affordable options Roots offers! Spent $4.08 on a side salad that contains mixed greens, carrots, tomatos, sprouts, sunflower seeds, onion and topped with creamy avocado dressing. Made it a combo with a cup of creamy mushroom soup. You don't have to be a student to eat there, you just need to know about it (in Muir) and be ready to take in an interesting, major research university campus during your visit. #5dollarchallege

These weren’t necessarily healthy meals, though lots of you sent in cheap veggie options — which isn’t surprising. I’m vegetarian, and whether I’m buying a burrito or a burger, I usually end up paying less than my meat-eating friends.

You Can Carbo-load With Your $5

@youthradio – 2 Papa Murphy's for $12 to feed 3 people for at least 2 meals each. #5dollarchallenge Central IL pic.twitter.com/gmCBSVuTeN

But people sent in plenty of meaty submissions as well. Alongside all that meat, we also got a lot of burgers, burritos and pizza, which means: bread, bread, bread! Especially since gluten-free meals are a huge trend right now, it was interesting to see so many carb-heavy options.

Listeners Take Their $5 To The “Groceraunt”

On the lighter side, many prepared salads came from grocery stores. This illustrates the “groceraunt” trend — more supermarkets are offering meals we typically expect from sit-down eateries.

Lots of $5 Deals For Breakfast Fare

Breakfast for $2.14. So bad for me yet so good. @youthradio #5dollarchallenge

There were a handful of breakfast options, consisting of the usual suspects: eggs, bacon and toast.

$5 Deals Take Your Taste Buds All Over The World

Some of the most appetizing-looking submissions were foods with origins outside the U.S.: tacos, tikka masala, sushi, fried rice and bahn mi sandwiches. These were some of the heartiest meals available at reduced costs.

Many $5 Deals Leave You Thirsty

@youthradio #5dollarchallenge half a missing egg sandwich with sunflower sprouts and a spicy ginger soda for $4.40 at Natures Grace on Main Street honesdale #yum

However, very few submissions included a beverage. Five bucks can buy a range of food, but this tight budget may leave some of you thirsty. (Of course, tap water is often free.)

—
Thanks to all who participated in the #5dollarchallenge! And let us know if we left any of your favorite cheap meals off the map on Twitter — tag @youthradio and@NPRFood.

Kasey Saeturn is a reporter with Youth Radio, which produced this story as part of its series Fast Food Scramble with NPR’s Sonari Glinton.