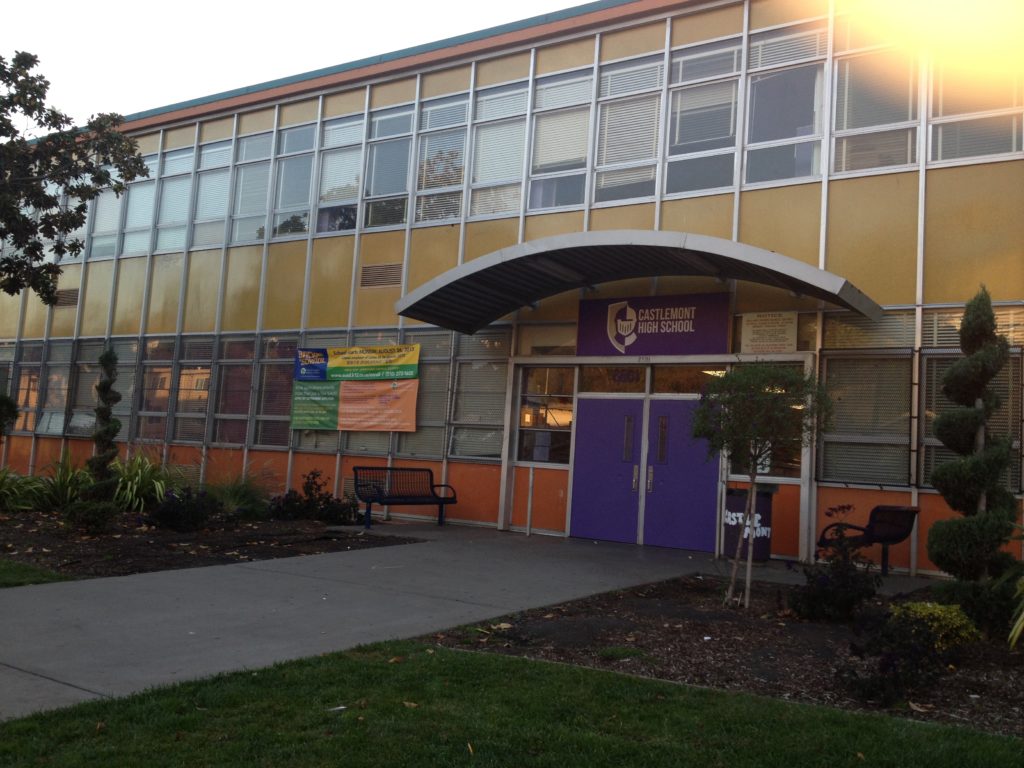 Castlemont High School, located on a street where multiple shootings have taken place in recent years, including one last April where bullets went through the front door. It’s also the site of several teen violence prevention programs and a youth health center.

Tomorrow marks the first anniversary of the school shooting in Newtown, Connecticut. The 26 lives lost that single day sparked a national debate on gun violence. A year later, the issue still looms large in many communities, including those where shootings are a daily occurrence.

Castlemont High, in East Oakland, looks like many other California schools — colorful box-style buildings with big windows — but inside, teacher Demetria Huntsman and several students are deconstructing a shooting that happened out front just 30 minutes before I got there.

“I wanted to find out from you guys, what was this lockdown that happened today?” Huntsman asks. A chorus of teens reply, their voices overlapping in the small classroom. It was gun shots, they say.

One student, 16-year-old Joseph Hopkins, had been close to the action.  He was walking with a friend outside the school when a driver in a car started shooting.  “We just like heard gun shots, so she just dropped her stuff and we just both turned around and started running,” he said. “That’s the closest I’ve ever came (sic) to almost like actually getting shot.”

This after-school group — run by the local organization Youth ALIVE! – is one of many violence prevention programs serving the neighborhood. And the violence is daunting. According to police department data, between March and October of this year, there was an average of three shootings a day within a mile and a half of Castlemont High, including one last April where bullets came through the front door.

“If I can wake up one day, walk outside with the possibility of getting shot at any point and time, that’s kind of nerve racking every day to do,” said 14-year-old Trevor Watson, one of the youngest members of the group.

Huntsman, the facilitator, nods calmly. “You bring up a good point Trevor,” she says, “Because you feel that a school at 3:30 in daylight, just the thought of maybe that’s not a safe place, that’s a real difficult reality.”

“You can be at the…safest place that you think and then some type of violence busts out,” Watson says.

A block by block difference.

In spite of the violence, kids we talked to say Castlemont High is one of the few places they feel safe, in part because of programs designed to help students cope with regular shootings–maybe even prevent them.

“It is up to adults and professionals to help them understand and process it and respond to it appropriately, so it can be a tool for learning and growth,” says Alex Briscoe, the Director of Alameda County Health Care Services.  In the Castlemont neighborhood, according to county reports, homicide is the leading cause of death for young people. Briscoe says the life expectancy for residents in this area is ten years shorter than that of people living in the upscale Oakland Hills just over a mile away.

“We can tell you how long you’re going to live by what zip code you live in,” he says.

Across the street from Castlemont High, on a chilly Saturday morning in December,  about twenty kids ranging from toddlers to teens run, climb and squeal at a playground while three security guards in bright yellow shirts look on. The group, East Oakland Community Playdate, has been meeting here once a month for the last several years. Parents who participate know the neighborhood has its problems with violence. In April, there was a shooting near the playground and the families had to take cover.

“I was scared,” said six-year-old Paolo, thinking back to the day the shots rang out.  He points to Youth UpRising, a popular youth center attached to the playground. “I had to go inside the building.”

Paolo’s mom, Stephanie Pepitone, is the organizer of the play group. She says, despite the April scare,  she’s dedicated to the neighborhood and wants to stay. But the shooting was still a wake-up call for her family.

“In the same way we teach our children about fire safety, ‘stop, drop and roll,’ it was the first time we realized we had to do the same kind of safety training with our son in terms of what to do when you hear gunshots,” she said.

Sitting on the steps in front of his apartment, 14-year-old Trevor Watson  — the same kid from the after-school group at Castlemont — says the popping sounds of gunfire sometimes keep him up at night.

To deal with it, he tries to ignore it.

“I see stuff like that so often it doesn’t affect me any more,” he says.

But that stoic facade drops when a kid walks into the courtyard in front of Watson’s apartment. He’s holding something under his shirt. Watson’s usually booming voice suddenly drops to a whisper.

Watson explains he glimpsed the tell-tale handle of a gun when the kid was adjusting his clothing. He says the kid lives in the house directly across from him.

Even if you want to, you can’t afford to ignore guns here.

Just two hours after the interview, seven men were shot just blocks from Watson’s house. No arrests have been made.