Anthony Davis, 17, stands outside of Grady High School in Atlanta, GA. Since he’s been a student there, he’s experienced at least two shootings on or near the campus, including one where a girl accidentally shot herself in the leg. “We didn’t hear the gunshot, but the teachers all of a sudden didn’t let anyone out of their seats,” Davis said of that day. “Everyone was looking around, asking what’s going on.”

At the beginning of this school year, a football game at Kennedy High School in Richmond, California, was interrupted by gunshots only 20 yards away from the field. .

“Oh yeah the game was in full effect,” said teen football player Moises Garcia. “We were on the sidelines. I was playing. And they started shooting, busting.” “Everyone just ran from the stands outside, people threw themselves down on the field. It’s kind of amazing no one got hit, because they were shooting this way,” said Garcia.

The incident at Kennedy wasn’t a mass event. So unless you live near there, you probably never even heard about it. But school shootings keep happening. Gun violence is in the national spotlight again in the wake of a mass shooting in San Bernardino, California yesterday and the shooting at a Planned Parenthood clinic in Colorado last week.

While mass shootings make up most of the headlines, many other gun incidents fly under the national radar – including many at schools. This year, there have been more than 60 gun incidents on campuses around the country. And for kids my age, we’ve spent our entire lives thinking about school shootings.

“Yeah, the first one I really heard about, that was recent enough, was Sandy Hook,” said Garrison Pennington, a teen from Albany, California. He was born in 1999, 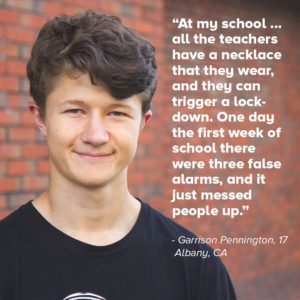 “At my school they started doing this new system for lockdowns where all the teachers have a necklace that they wear and they can trigger a lockdown,” Pennington said.“And one day the first week of school there were three false alarms. It just messed people up.”

The first lockdown I remember was in third grade. At first, it was exciting; like we were playing hide and seek. But when the kid beside me explained that this was practice for “if a bad man wants to hurt us”, I felt sick to my stomach.

As I grew older, lockdown drills grew more frequent. And so did the school shootings I heard on the news. Everytown.org has been tracking shootings on school campuses, which they define as every time a gun is fired at a school.

“While this is a range of types of incidents they all shatter the sense of tranquility and safety that is a necessity for education and fostering of youth,” said Ted Alcorn, research director at Everytown.org, “and is a nightmare for families who believe their children have gone to school to learn and be protected there.”

Since 2013, there have been more than 160 school shootings, according to Everytown’s records. This year alone, their list includes a middle school in Merced, less than 2 hours away from my house; a high school in Paradise, Texas. Even a preschool in Everglades City, Florida. Seeing the names of the cities on a page together made me feel even more deeply that school shootings can happen anywhere.

“I remember I was in class. It was really a normal day,” said 17-year-old Anthony Davis, a student Grady High School in Atlanta. In 2013,  a student brought a gun to school and accidentally shot herself in the leg. “We didn’t hear the gunshot, but the teachers all of a sudden didn’t let anyone out of their seats,” Davis said. “No one could go to the restroom. Everyone was looking around, asking what’s going on.” 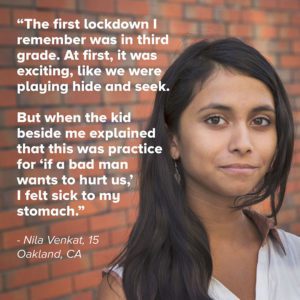 For kids who’ve been through school shootings, even years later it’s still hard to forget. This year, there was another incident near the school. Like the shooting in Richmond, it was also during a football game.

“We had little kids there. So in my mind, the panic was for them as well as our lives,” Davis said.

No school wants to be associated with a shooting. Many of the school administrators we contacted didn’t call us back or declined to comment for this story. Like they just wanted to move on and focus on what school is meant to be about, education.

But in an era where the next campus shooting may only be days away, moving on is not that easy.