When my friend Stephanie texted me on Valentine’s Day, suggesting I get in touch with my sister to see if everything was okay, I was confused. My sister is a sophomore at Marjory Stoneman Douglas High School, from where I graduated eight months ago.

A group text from my sister followed soon after, telling my parents and me that there was an active shooter at the school, and that she was hiding in a closet near the bus loop, thankfully on the opposite side of campus. She was terrified. Around an hour after the shooting began, at 3:36pm, she sent, “I LOVE YOU GUYS WITH ALL OF MY HEART.” Four minutes later, three blue hearts. Then, we didn’t hear from her for a full 12 minutes – certainly the longest 12 minutes of my life.

As more texts came in, I watched the scene unfold from an office at the lobbying firm where I intern. Frantically, I was texting high school friends in a WhatsApp group chat, while wildly checking Twitter for updates on what the Coral Springs Police Department at first called only an “active scene.” The whole time, I was shaking with fear. 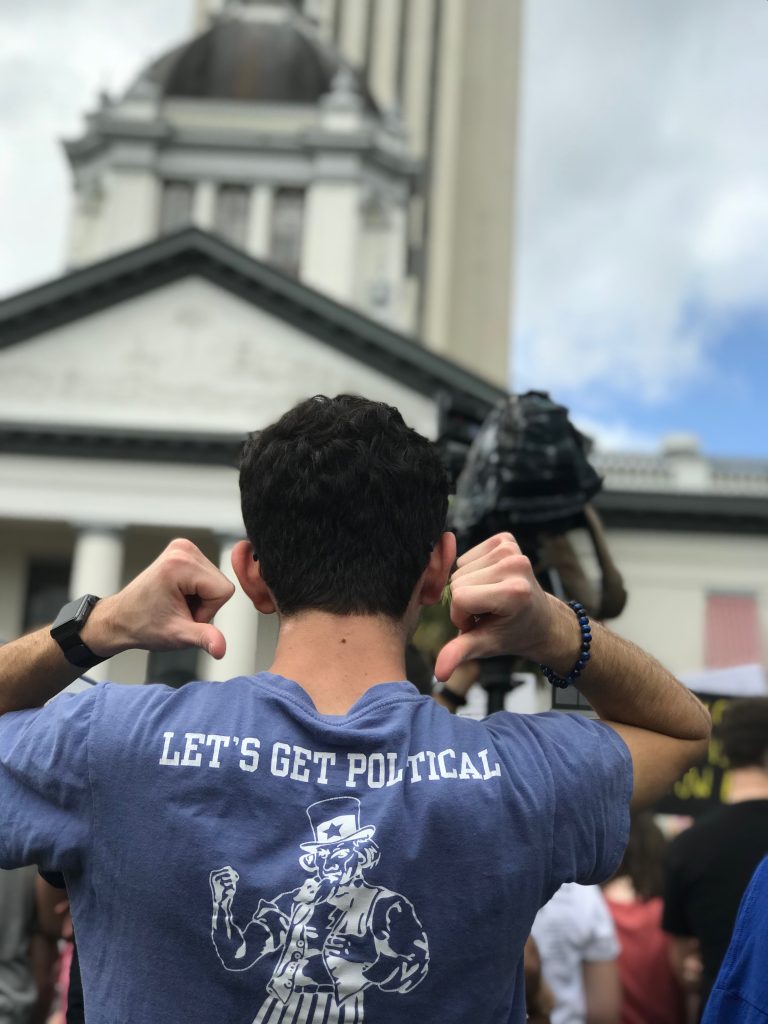 Watching all this violence and trauma hit my community has transformed me from civically engaged to, as a friend put it, a full-on “Furious Activist.”

Two years ago, when I was a junior at Stoneman Douglas, a friend and I founded the Politics Club — a nonpartisan forum where students express their opinions. We did so with a mission that no student would be politically apathetic in the future. Based on the response of the survivors, I can see that political apathy at Douglas is long gone. Watching my former classmates and fellow MSD alumni on national news has been inspirational, and I am immensely proud.

The public tends to be caught off-guard by politically active teenagers who want to make their voices heard. We are all so used to being lectured by adult politicians and advocates day-in and day-out, that it is simply refreshing to see a younger generation take charge. It gives hope for a better future. That is why this movement that my high school started has gained such traction, and has even prompted a listening session with a very pro-gun president enthusiastically backed by the NRA.

Unlike many of the students who survived the shooting, including my sister, I’m old enough to vote, and I plan to do everything in my power to prevent another shooting like this one.

Comprehensive gun reform begins, and ends, with all of us. We must vote for candidates who will keep weapons of war off the streets and take practical steps to keep our schools safe. We have to strengthen background checks, close legal loopholes, and crack down on so-called “straw purchases,” which allow those unable to buy a gun to do so in another’s name.

Those who say that school shootings are exclusively a result of mental health issues are complicit. Of course, mental illness should be addressed through increased funding and programs, but it would be a disservice to the victims to pretend that guns are not the root cause of this epidemic.

Our representatives write laws about everything from new license plates to tree trimming (both bills in Florida’s Legislature this year), but can’t find time to save the lives of students and teachers and faculty? Instead, students like myself are organizing marches, making speeches, and challenging our elected officials. As has been said many times in the last week, the adults have failed us, so we must take action.

And while we take action, we must stay furious, to ensure that this happens #NeverAgain.

Matthew Harris is in his first year at Florida State University. He is helping to organize the March for Our Lives, planned for March 24, 2018 in Tallahassee, Florida.