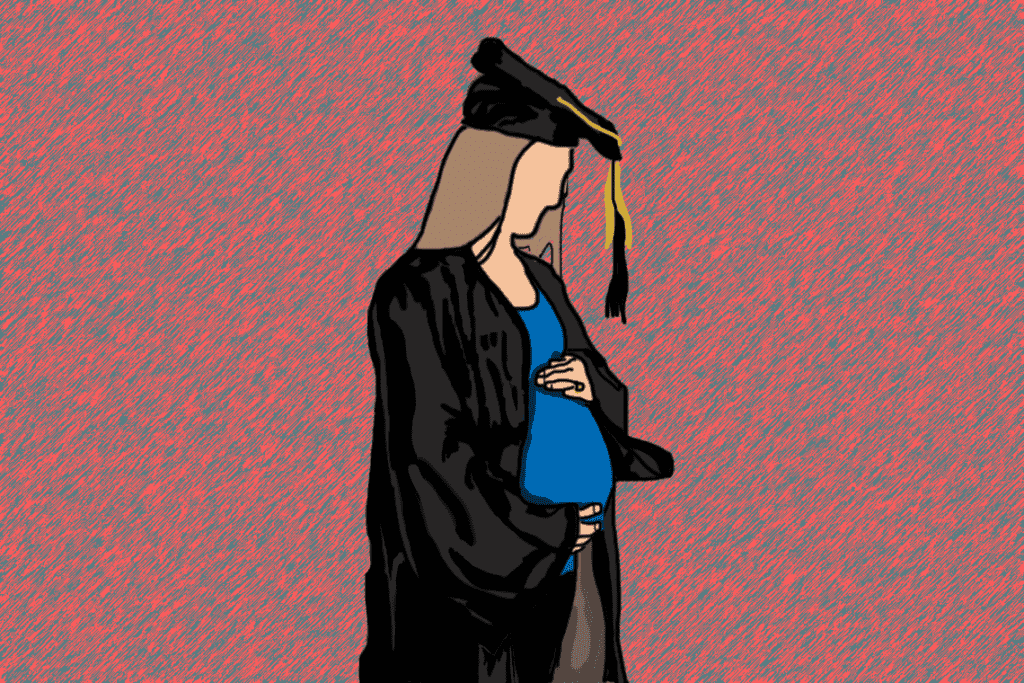 To most high school students, walking across the stage at graduation is a bittersweet moment. It’s the culmination of four years of hard work, so not being able to walk the stage with the rest of your class can be crushing.

That is what 18-year-old Maddi Runkles, who attended Heritage Academy in Hagerstown, Maryland, felt when her Christian school banned her from attending her graduation because she is pregnant. Instead, Runkles graduated in a private ceremony attended by her close family and friends at a church in a neighboring town.

Runkles described herself as a ‘pretty active student.’ She was student council president, involved in several extracurricular activities and kept a 4.0 GPA. Runkles says all of these accomplishments were overlooked and not considered when the principal made the decision of keeping her out of graduation.

Youth Radio talked to Runkles about what it is like to be a student at a Christian school, the punishment from school officials and her plans for the future.

The following conversation has been lightly edited.

Sierra Fang-Horvath, Youth Radio: What was school like before your pregnancy?

Maddi Runkles: Before I was pregnant, I was friends with everybody. My family was very well-liked around the school. Everyone would come up to me and say, “Hey Maddi, how’s it going?” But after they found out that I was pregnant, a lot of people would give me the cold shoulder and wouldn’t look at me in the hallways. It was being treated like I was the black sheep at the school.

SFH: Can you walk me through the moment you found out you were pregnant?

MR: There was a lot of shock and a lot of fear. Shock because I never thought that it would happen to me. And fear because I knew how I was going to be treated. I grew up in a Christian family and this is not really something that people would expect from us.

SFH: Were you worried about how your parents would react?

MR: I knew my parents were going to be disappointed because this was not how they thought my life would turn out. I wouldn’t be able to have a normal college experience like everyone else. You know, they love me, they forgive me. I know what I did was wrong. I was more afraid to tell people at my school mostly.

SFH: After your principal found out that you were pregnant, why did he call an assembly?

MR: I think the assembly was just to put any rumors to rest. But for me, it seemed like it was his way of publicly shaming me. No other student before ever had to get up in front of the student body to address what they had done and what rule they had broken. I don’t know why a pregnancy makes things so different than kids doing something illegal. I just don’t understand why that had to happen and why it had to be so public. I talked in front of parents, all of my high school classmates, and my friends. I said you, “If you guys are doing the same types of things that I was, stop because I don’t want any of you to have to go through something like this.” This whole line of students came up and they were all hugging me and thanking me for having the courage to go up in front of them and admit my mistake.

SFH: Did you face any other repercussions during your pregnancy?

MR: I was not allowed to be seen around the school or to attend any school-related events while I was pregnant. They told me, “After you have the baby in September,  you’re more than welcome to come back around and bring your baby so everyone can meet him, but while you’re pregnant you are not allowed to be seen by any of the Heritage people.” So my parents appealed that. The school told me that I could come for the end of the school year, but still all of my leadership roles were taken away and I was not going to be allowed to participate in my graduation. That was the first time that they actually said, “No graduation.”

SFH: Having worked so hard in high school, how does it feel to be banned from your own graduation?

MR: I feel like all of my academic achievements are being thrown away and not acknowledged at all. I’ve worked so hard throughout the whole time I’ve been in school. I’ve been at this school since I was three. That’s 15 years of academic achievements that are being thrown away, not recognized and acknowledged. That hurts. My school is so small and graduation is a really big deal around here and I’m going to be the only one that isn’t there to celebrate with my class.

SFH: What’s your post-high school plan? Are you planning to attend college or has the pregnancy changed your plans?

MR: I’ll be living at home. I’m going to take online classes somewhere this fall. I have a couple of options right now but I’m still in the decision-making process. Everything that I’ve wanted to do and worked towards before I found out that I was pregnant, I still want to go accomplish all that. It’s just going to take me maybe a little while to get there. I’m going to have to do it in a different way.

SFH: Can you talk about Embrace Grace and the chapter you want to start?

MR: Embrace Grace is a ministry through churches that helps women with unplanned pregnancies. I would love to start a chapter in Hagerstown because it has a very high teen pregnancy rate. I think that my school has really sent the wrong message and given Christians a bad name. My goal for all this is to set an example for how people like me should be treated, and doing everything I can to get them the support that they need.