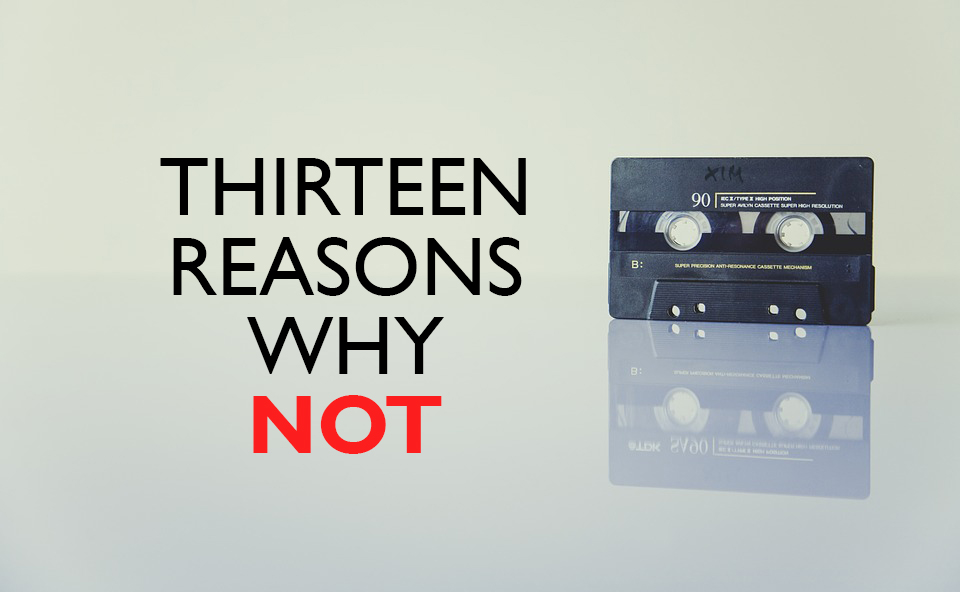 A group of kids from Oxford High School in Michigan have created their own version of the controversial Netflix show, “13 Reasons Why,” with a twist. They call it “13 Reasons Why Not.”

With support from teachers, each student creates an audio recording of a personal struggle–just like on the show. But instead of framing these painful experiences as reasons to harm themselves, the kids at Oxford High thank a person who helped them get through their darkest times. The stories play over the intercom each morning, for the whole school to hear. The project will go on for 13 days.

On the same day that his story played at school on May 9th, 18-year-old Dylan Koss talked with Youth Radio’s Valencia White about what it’s been like to be a part of “13 Reasons Why Not,” and why the project is so important for his community, and teens in general.

The following conversation has been lightly edited.

Valencia White, Youth Radio: How did the idea for 13 Reasons Why Not come about?

Dylan Koss: Three years ago, a student, Megan Abbott, committed suicide in the woods behind our school. Her family is who we’re doing it for. The show [13 Reasons Why] factored into it, but the suicide was more our driving force, and how to make a tribute to her and help kids at the same time.

VW: Can you explain how it works–what you all are doing at your school every morning?

DK: The day before, a student is selected, and we take into account how that student will handle the situation, if they’re in a healthy spot to talk about it, and able to take any kind of backlash (if there is, which there hasn’t been for any of the seven of us who went). We type up a script, we record it, and then the next day, it’s played right when school starts. It just plays that one time. After that, the seven of us will go to Twitter and Tweet at this person, to tell them how strong they are, and just kind of give them positive feedback right off the bat, so any negative comments are squashed almost immediately.  So far it’s working. There’s a dialogue at school between students and staff–suicide is being talked about.

VW: What story did you share in your recording?

DK: I’m an openly gay student in Oxford, so I talk about my struggles with that. My family’s Catholic, so for me, coming out was kind of a scary thing. For some Catholics–I wasn’t aware that my family wouldn’t react this way–but for some Catholics, that’s a sin. I was nervous to tell them, for the fear of them cutting me off.

[LISTEN TO THE STORY DYLAN PLAYED OVER THE SCHOOL INTERCOM HERE]

Another thing I talked about is how the word gay is used. For example, if a kid says “that was so gay,” it has a very negative connotation to the word and how people see it. And then we talk about our reason, “Why not.” I talked about one of my close friends. I have a bond with her that I don’t have with anybody else. I can hit her up in the middle of the night, and she’ll text right back.

VW: How did your friend feel when she heard this tape?

VW: What were your first thoughts when you got that text?

DK: When I got that text, I was thrilled. I knew she would be excited that I chose her, because like I said, I don’t think she knew that she meant as much as she does. I was thrilled, like I was overcome with excitement. I knew she felt the same way… It was one of those moments where you have this bond with someone, that’s really hard to find.

VW: Before the recording, had you ever shared your story with anyone?

DK: I haven’t. What I talked about in the tape was the first time anyone heard it. We actually have to call and get approval from our parents to do the tape. We called my mom and she said yes, that I could do the recording, and after she asked me why I hadn’t told her [about the bullying he experienced from other kids for being gay]. There is really no reason why I didn’t tell her, so I had to tell her, I don’t know why.

VW: What was that conversation like? Was it awkward?

VW: What do you think would’ve happened if your friend hadn’t helped you?

VW: What was it like for you to share such a personal story in such a public way?

DK: It’s strange, but at the same time it’s a weight lifted off your shoulders. When I was originally writing down what I wanted to talk about, I started to shake. Like I said, I’ve come to terms with what happened, and I’ve moved on. But putting it out is totally different. When you come to terms with something, you don’t think about putting it out there again. So to put it on paper, it’s emotional. You have emotions attached that you think are gone. You hear it over the PA, it’s almost surreal.

VW: Did any of your family members, besides your mom, listen to your recording? What were their reactions?

DK: I took a picture of the script that I had and I sent it to my dad, grandparents, aunts and uncles. Everyone was super proud. My grandmother, who’s super Catholic, called me and started crying and told me how she wants me to know that she loves me, no matter what.  It’s a luxury that many kids don’t have.

VW: Did you have any concerns doing this?

DK:I have zero regrets. It wasn’t easy but it wasn’t anything that I was worried about. I have received no negative feedback at all. Everything has been support and how courageous you must be to do that. And there have been six other people that have gone before me, and they have said there’s no negative backlash.

The “13 Reasons Why Not” stories will continue to play each morning at Oxford High School until May 18th.