At Youth Radio’s Innovation Lab, we’re always both driving forward and looking back. Right now, we’re finishing a period of market research and drawing up user-flows for the next big project we’re undertaking with our MIT partners. At the same time, the Lab’s youth team is reflecting on prior projects in order to identify lessons learned.

Joy White and Christina So–both high school seniors–have been making steady progress on an app they’ve collaborated on, off and on, since the summertime. Below is a series of inter-cut reflections on their process to date. We’ll update you in 2014 when they’ve got a build to share! 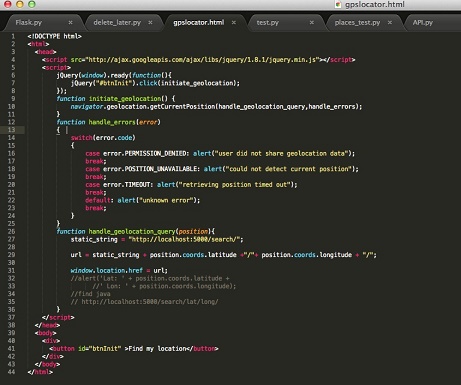 Christina: This summer I did something I never thought I would ever do. I created an app, Better Safe, with my co-worker, from scratch. Needless to say, creating an app was no easy task. At times, it felt like I was Sisyphus. I had to keep pushing, keep going, but somehow whenever I thought I’d reached the top, something would break and the process would start all over again. Thankfully, during those difficult periods, I had somebody to carry that burden with: my co-worker, Joy White.

Joy: Our basic idea for Better Safe was to create an app that would find the user’s location and identify the nearest hospitals and other safety aids. The catch was, after the app found the user’s GPS location, we wanted it to work without any Internet connection. This “no connection” ideal was inspired by Christina’s own personal experience with her dog, who recently needed immediate medical attention. She knew she could not call 911–that was for humans–but she did not have any Internet and did not know any other numbers to get help for pets.

Christina: The first step, which I personally consider the easiest step, is conceptualization. Having been in a situation that personally affected me, the idea for what the app would be came without frying any brain cells. Once the conceptualization stage was complete, we started on the market and user research. Using iTunes and the Android store, we quickly narrowed down which three apps were similar to the one we were creating. When we finished filling out the pros and cons of each specific app, we noted parts of the apps that we felt would fit the project we were creating, Better Safe. We put together a survey for the user research, had Youth Radio students take the survey, and analyzed the results we got back. Then we proceeded to design the app and create the user-flows. After we put our heads together, Joy and I crunched out what the app would look like and created a PowerPoint presentation that would show how our app would function.

Joy: I used the coding languages Python and JavaScript, as well as a small amount of HTML, to create the entire back-end of Better Safe. I had to learn how to be flexible as a programmer and generally a more patient person. Several times, I had to go back and fix or delete bad code, learning as I went along. Already involved in Python, I had to develop my skills in that language and look up any information that I did not already know. Additionally, the project was completely unexpected for me. Just a few months ago, I could not even conceive of doing something like this, especially with only Christina at my side. Well, I did have access to Kurt and Asha, who run the App Lab, but they made it a point to make us figure out as much as we could on our own.

Christina: For a common, normal 17-year-old teenager, nothing could have been more undesirable during the summer than having to go to work. But unlike normal teens our age, our boss gave us the chance to have a short mentorship at Ask.com and discuss any questions we had as we worked on Better Safe. Our two mentors were Nan Guo and Bhawna Singh. This once-in-a-lifetime opportunity was something I did not pass up and I went every other Thursday to Ask.com for an hour. Now looking back at my time at Ask.com, I realize I learned more than just app development. I learned how to work together as a team, what it’s like to be a programmer at a tech company, and how to work as efficiently as possible. The mentors at Ask.com also taught me how important it was to split the work up so that the app development process could be completed more quickly without having to wait for one partner to finish up one part of the app in order for me to continue. At Ask.com, although there were bean bags, tons of snacks, yoga balls, and other objects that you would not expect in a work environment, there were also a lot of formal settings, such as the business meeting rooms. The mentorship at Ask.com most certainly taught me that work is a complicated, intricate balance between toiling and having fun.

Joy: Every time Christina and I visited our Ask.com mentors, we had to present a new aspect of our project, which kept us on deadlines. Overall, they gave us practice with professionalism and timeliness. I am proud of the work Christina and I have done as we move through our project’s last stages of development. I look forward to completing Better Safe because then, I will have finished my very first app.

Christina: Joy focuses on the “back-end” of Better Safe, where the app will draw its information. I’m working on the “front-end” of Better Safe, where the app will display its data. As long as the process was and will be, and considering the steps of the development cycle we have left, we are doing our best to race to the finish line. And cross it.