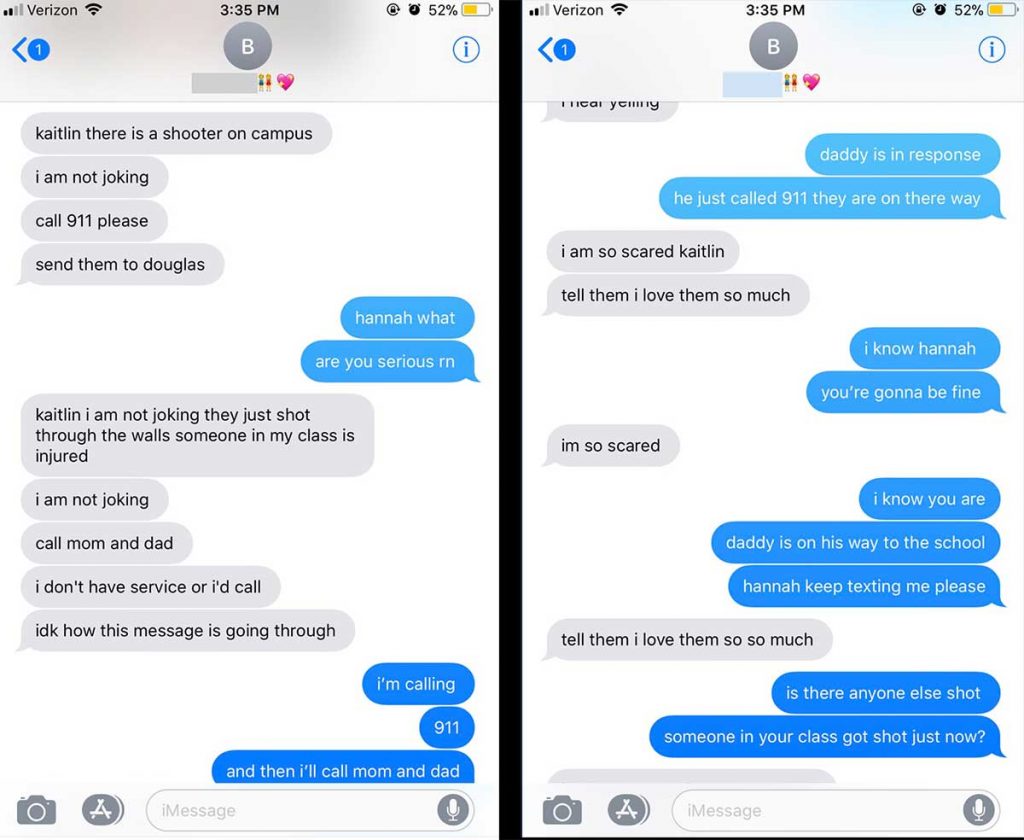 19. The age of the shooter, a former student who was expelled for disciplinary reasons.

18. The number of school shootings so far in 2018, even though it’s only mid-February.

The massacre occurred shortly before the end of the school day. The shooter reportedly pulled the fire alarm in order to try to draw students out of their classrooms. After he began firing, the school went on lockdown, with some students and teachers barricading themselves in classrooms and others running for cover. The shooter had an AR-15 rifle and “countless” magazines of ammunition, according to Broward County Sheriff Scott Israel. The shooter was apprehended by police officers shortly after 3 p.m., and will face 17 counts of premeditated murder.

Students took to social media and texted their families while the school remained on lockdown. Those images and videos quickly spread. Warning: the second video contains graphic audio, including the sound of screaming and gunshots.

My school is being shot up and I am locked inside. I’m fucking scared right now. pic.twitter.com/mjiEmPvGNb

I couldn’t imagine being in these students position. #stonemanshooting pic.twitter.com/gmJnYQgnPO

Student reporter David Hogg at Marjory Stoneman Douglas High School spoke with his classmates while hiding from the deadly shooting: “I wanted to be a junior NRA member … now I can’t even fathom the idea of a gun in my house.” https://t.co/X550dpgA88 pic.twitter.com/T7s1uEieOk

Students and adults alike expressed sadness, fatigue, and anger at the frequent occurrence of school shootings in the U.S. today.

I truly still cannot believe what i went through today. It’s one thing to feel sad about it when you see it trending, but for this to happen IN MY CLASSROOM is so traumatizing. #parkland #stonemandouglas

I envy reporters who only covered an out-of-the-blue mass shooting once upon a time. I’m 23, at a community paper & #Stoneman is my third.

Powerful plea from a student who survived the Parkland shooting, David Hogg: “Please! We are children. You guys are, like…the adults. Take action, work together, come over your politics, and get something done.” pic.twitter.com/UcTNungORp