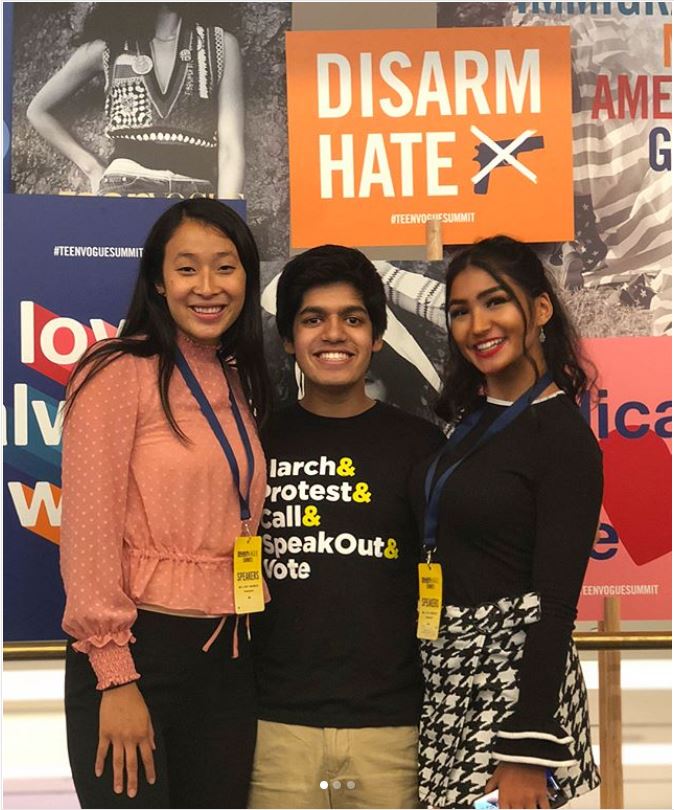 It would be impossible to list every person who spoke at the Teen Vogue Summit over the weekend who is trailblazing, changing the game, and exemplifying that our age does not limit our activism. But what I can say is that the summit had a profound impact on me.

I was fasting during the summit, as it is the holy month of Ramadan, when American-Muslims don’t eat or drink from sunrise to sunset every day for 30 days. At the end of Saturday’s portion, I hadn’t eaten or drank (yes, even water) for 15 hours, but I have never felt more energized. I felt energized by the contagious fire of every speaker, the infectious enthusiasm of every attendee, and the thoughtful leadership of Teen Vogue.

I’ve written for Teen Vogue before, and they’ve been overwhelmingly supportive of my work (full disclosure: I received complimentary tickets), but this summit was truly unlike anything I’ve ever seen or been a part of.

Since the event, Cecile Richards’ advice “Start before you’re ready” has replayed in my mind millions of times. It been on my mind not just because she said it, but because its truth reverberated throughout every aspect of the summit.

Phillip Picardi, the chief content officer of Teen Vogue, is 26 years old. A few years out of college, he is leading a media empire/movement. And he was far from the only young person at the summit who started before they were “ready.”

Naomi Wadler, an 11 year-old who captured the hearts of millions during her #MarchForOurLives speech, stood in power as she enchanted the entire audience, eloquently defending the need for gun reform while calling attention to the fact that gun violence doesn’t just matter when it affects upper-class white neighborhoods, and to how gun violence is often ignored when it affects black communities. She didn’t wait to grow up to make her point to America, and she’s already being heard.

I am a 19 year-old American-Muslim student activist/student/entrepreneur who is no stranger to the power of young voices (in fact, I founded a consulting firm to amplify the power of young voices), but even given that, I was floored by the power of Ja’Mal Green (who is running for Chicago mayor at age 22), the poise of Deja Foxx (a high school senior who is a new face of Planned Parenthood), and the perspective of Clifton Kinnie (a Ferguson activist with life stories that sent chills down my spine).

“I’m gonna be the change that I want to see.” – @JaymalGreen.

He just got a standing ovation in the middle of his speech — I’m fully ready to elect this man President. #TeenVogueSummit #TurnUo #ItsUpToUs pic.twitter.com/9PPoR4s5VP

At events like these — even at huge summits and conferences — I am often the only American-Muslim in attendance. But the Teen Vogue Summit went beyond having a token Muslim in the room. There was a badass lineup of American-Muslims. And they weren’t just tapped to speak on “Muslim issues.” They were there to speak about a full range of American issues. From model Halima Aden to comedian Hasan Minhaj to Hollywood adviser Sue Obeidi to activist Blair Imani, the diversity and beauty of our community was showcased in a way that was exceptionally empowering.

Growing up, I’ve very rarely felt represented or very rarely seen myself reflected and represented on platforms of prestige. At the Teen Vogue Summit, though, I saw myself. I saw my community. Representation matters, and in this case, it made me feel like I matter.

And it’s clear that I wasn’t the only one who felt included and seen. Akilah Hughes, for example, made a point to thank Teen Vogue for the panel that she moderated, as it was all badass women of color: Dear White People‘s Logan Browning, singer Amara La Negra, actress and model Laura Harrier, actress and activist Diane Guerrero, and actress Aja Naomi King.

I felt like I mattered not just when I was listening to speeches, but also when I met in person people I’ve connected with on Twitter and got to meet for the first time properly — and felt enveloped in love, support, and community.

Blair Imani jokingly refers to me as the “human LinkedIn,” as I love to know people, to talk to people, and to make connections, and I did just that at the summit. Here too, I started before I was ready — and did some rather presumptuous things.

After chatting with singer Lauren Jauregui about art and activism, I asked her to follow me on Twitter — and she did (yes, I’m still shook!).

4 years ago — I met @FifthHarmony as I was a huge #harmonizer.

Today, I got to chat w @LaurenJauregui at the #TeenVogueSummit — & after connecting about art/activism — she followed me on Twitter.

5H’s “Anything Could Happen” is the soundtrack to my life. pic.twitter.com/obHndZwvSe

I approached MSNBC host Joy Ann Reid and told her that it was a dream of mine to be on her show — and we have already connected regarding the possibility.

With moments like these, the Teen Vogue Summit reminded me that dreams can come true when we are in spaces that make us feel unafraid to be presumptuous.

Presumptuous is defined as “failing to observe the limits of what is permitted or appropriate.” I fail to understand why the word has a negative connotation.

Emma Gonzalez, Jaclyn Coryn, Sarah Chadwick, Kenidra Woods, Clifton Kinnie, Naomi Wadler, and other young activists that we celebrate are presumptuous — and that’s exactly why we should celebrate them. Young people are refusing to be limited by the societal expectation of what it means to be “young.” We are building movements, disrupting the status quo, and daring to make a difference. We are demanding that we are heard. We should aspire to fail to observe the limits of what is permitted or appropriate.

Halima Aden said it best: “Don’t change yourself, change the game.” We, Generation Z, are changing the game — by rewriting rules, ignoring and disrupting norms, and embracing presumptuousness.

In planning summits and events through my organization, www.redefy.org, a by-teens-for-teens social justice advocacy group, the hardest part is reaching people who don’t already agree with us, who need to be brought into the conversation and engaged on the issues that affect us.

So sitting in the Teen Vogue Summit audience, as one of few boys in a sea of ostensibly liberal female teenagers, I felt a little skeptical about how much good could come from preaching to the choir.

By the time the summit ended, though, my skepticism had completely subsided.