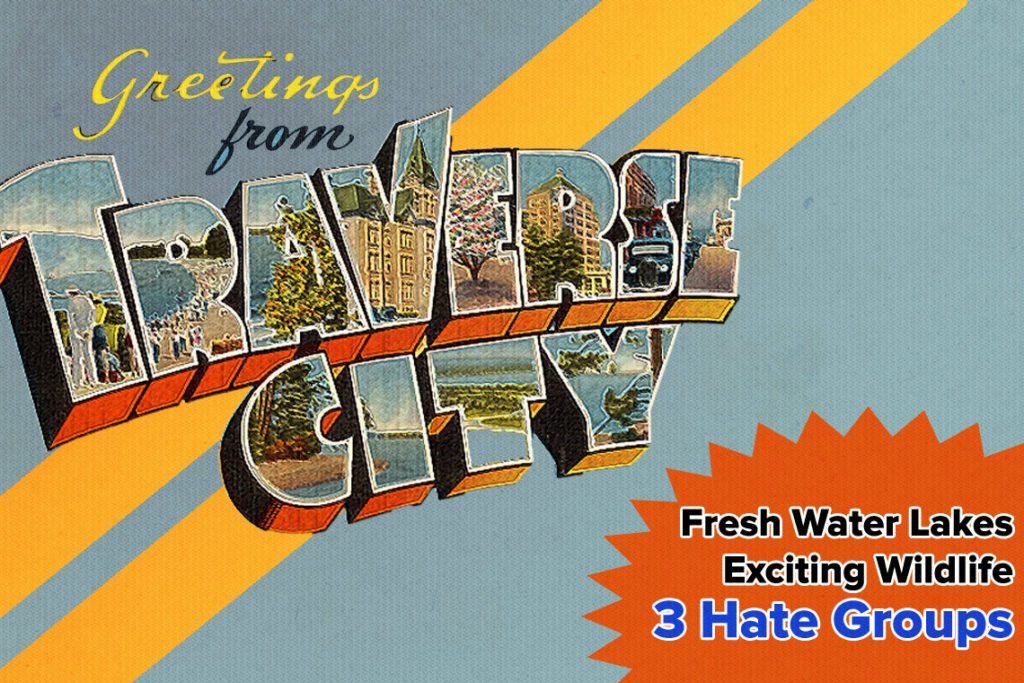 My hometown of Traverse City, Michigan is a vast land of freshwater, blue skies, wildlife, green as far as the eye can see…and three different hate groups within a three-hour drive of my house.

There’s a lot to love about this place, which is partly why I decided to stay here for college.

Growing up, sleep was the soundest in a small tent to the sound of cricket whispers and smells of wild flowers. Smiles were the widest at family bonfires with soft sand between my toes at my grandmother’s beachfront home on Grand Traverse Bay. Going to college in my small hometown has advantages – if my car is stuck in a snow bank, strangers will tow my car out, no questions asked.

But this beautiful town is also a great place for hate, and it hides so easily here. 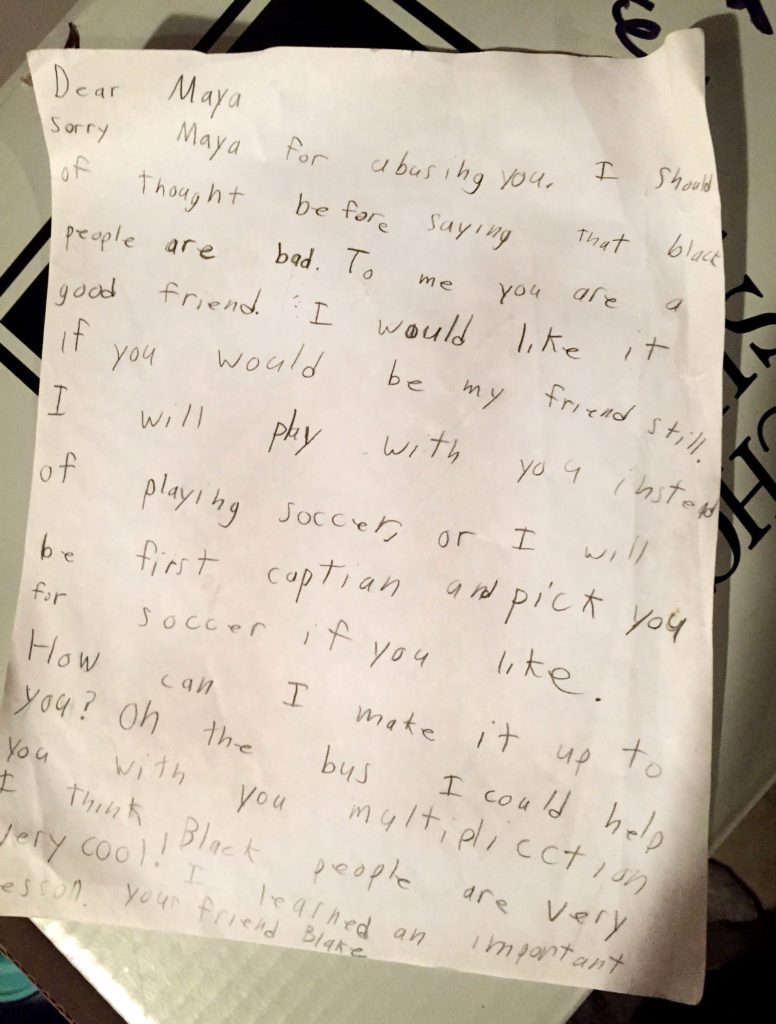 “I should have thought before saying black people are bad,” says one note I’ve kept all these years, “To me, you are a good friend.” Photo courtesy of Maya James

At five years old, my parents enrolled me in elementary school where I would be called the n-word for the first time ever. My teachers tried to teach racial tolerance, making children write apology letters during their revoked recesses for their behavior.

“I should have thought before saying black people are bad,” says one note I’ve kept all these years, “To me, you are a good friend.”

Some of those same kids, who wrote sincere letters would persist to call me names, throw rocks at me and threaten me until I was in sixth grade.

Now that I’m in college, the slights are less overt. I’ve gotten used to hearing other students throw around racial slurs and laugh. And driving around campus, I see cars with confederate flag license plates. During one campus forum on race issues, when black students raised objections to the Confederate flag and its associations with slavery, it seemed to offend a majority of the students there.

No matter how hard the other black students and faculty members tried to explain our everyday struggle living in a mostly-white town, the white students still disregarded us. They said things like “My girlfriend is black so I can’t be racist,” or “It’s about Southern pride.” Except, we are in the North. And the Civil War is over.

I started the Black Student Union at my college while I was dual-enrolled in high school. I had to beg three students to sign on so we could even start the group. Those three came to the first few meetings but eventually I was sitting in an empty room every week waiting for people to show up. And even though we had a successful event bringing a black gay comedian to campus (which was protested by the local hate group TC Family), the club never got off the ground.

The Black Student Union at my college invited comedian Sampson McCormick to perform. The event was protested by a local hate group. In this video, he talks about his experiences performing in Traverse City.

The Black Student Union essentially disbanded because I could not gain enough interest. This year, I only received one email to inquire about the group.

Black students especially did not feel like they could be a part of the club. I get it — the more that you embrace your “blackness” here, the less people want to do with you. Even liberal people here think Black Lives Matter means white lives don’t, and people have gone so far as to call it a hate organization.

In social situations, the conversations just end if race comes up. It is a great way to get people to stop talking almost on command. A few students invited me to a party last year, and a large group started talking about “what black people do” while playing the game Cards Against Humanity. Jokingly, I blurted, “Oh, come on, white folks.”

The room fell silent, and everyone avoided talking to me afterwards.

If, like me, you are mixed or black in Traverse City, you grow up differently than peers in other places. In my small town, my dad and I always look at each other and smile when we see another black person. The head nod is customary, but when we are visiting family in L.A, I cut it out. I no longer feel like there is an urge to find people like me– because they are everywhere. 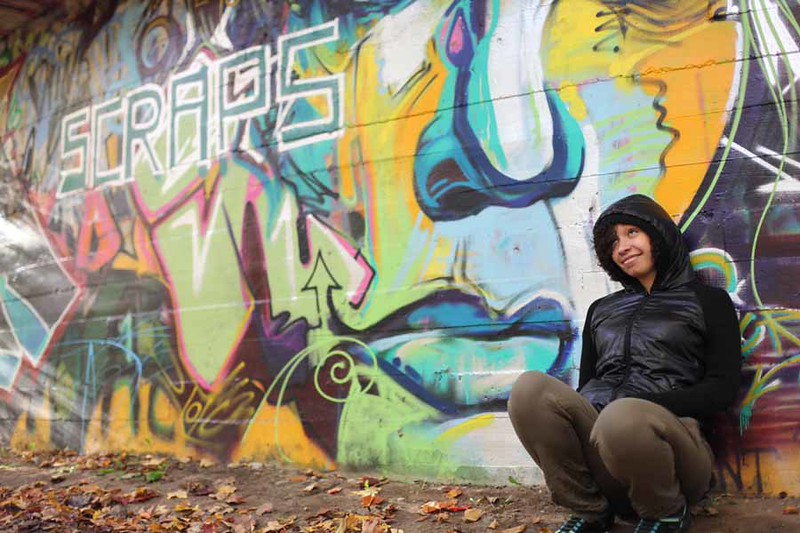 Maya James crouches in front of one of her favorite hangout spots, the cistern at the Grand Traverse Commons, in her hometown of Traverse City, Michigan.

Once the Black Student Union club floundered, a white student approached me to talk about turning it into a group where white students felt “welcome.” So I changed the name. Now it’s Students United for Social and Environmental Justice. I just hope the umbrella is big enough to attract members and bring civil rights actions to campus. We are trying out our first meeting in September.

I’ve had to compromise myself and my community more than I want, hoping for diversity and dialogue. At the moment, those hopes are more pipe dream than reality.

The truth is, in some ways I don’t belong here in Traverse City, but I also don’t belong in places where people say I belong. I can’t relate to other black or mixed people in urban areas. Most of the people I know in Traverse City are not hateful racists. They are people who have known me my whole life – my friends, my teachers, my coworkers. So I try my best to appease the white people around me. That’s the only way I know how to deal with it…until more people who look and think like me live here.