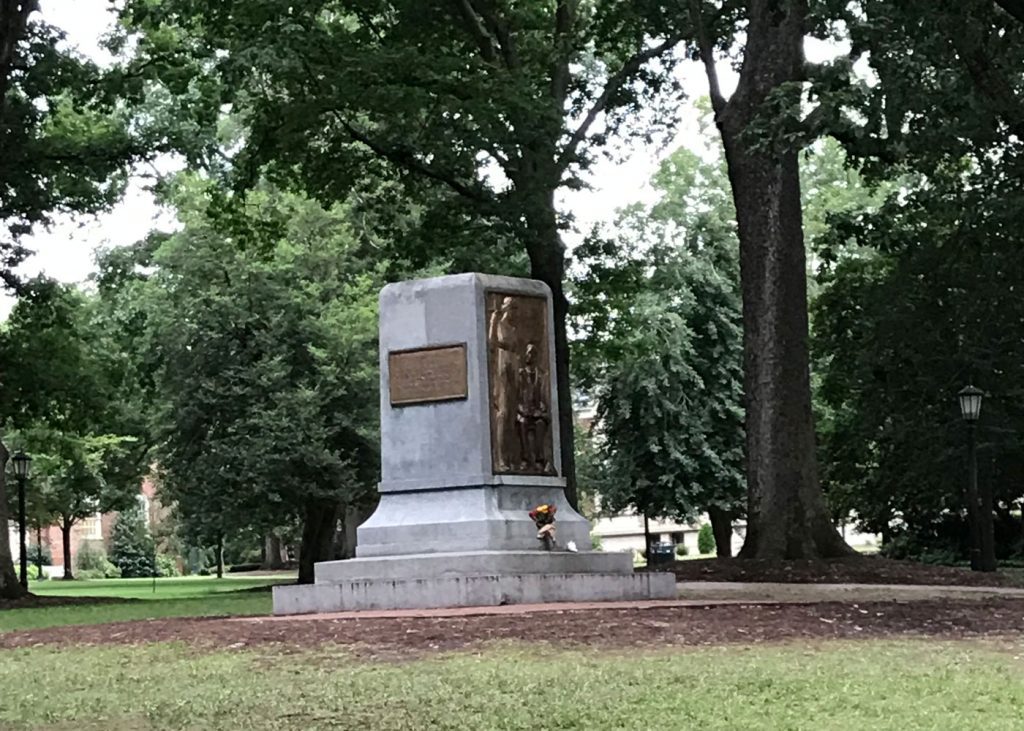 On Monday, August 20th, a group of protesters removed “Silent Sam,” a statue of a Confederate soldier that had stood on UNC-Chapel Hill’s campus for over 100 years. The best of the statue remains. Photo: Emma Deschene/Youth Radio

Even before I became a student at the University of North Carolina at Chapel Hill, I had heard about “Silent Sam.” My sister had told me stories about the statue, which had stood on UNC’s upper quad for over 100 years.  The bronze Confederate soldier towered around 20 feet tall on his marble pedestal, adorned with dedication plaques and — in recent years — graffiti and protest posters.

Stories of Silent Sam’s significance varied depending on who was doing the telling. Tour guides said he represented the soldiers from North Carolina who fought and died in the Civil War; campus orientation leaders joked that the rifle in his hand would go off if a virgin walked by. But, for the most part, Silent Sam was always portrayed by the school as an integral part of UNC’s campus.

So naturally, it was controversial when, on Monday night, over 200 protesters, students and Chapel Hillians alike, toppled the statue to the ground.

Silent Sam wasn’t the first statue to fall. Many cities are making the decision to remove their Confederate statues due to the infamous, pro-slavery history they preserve. However, in UNC’s case, the administration and the state government did not remove it by choice. Much like when Bree Newsome removed the Confederate flag from the South Carolina Statehouse, young people decided to take the action on their own.

Since my enrollment at Carolina in fall 2015, my understanding of the statue has changed. Shortly after the 2016 presidential election, my English professor started calling it  “The statue that shall not be named.” Back then, I didn’t understand why it was such a controversial issue. It was just a statue.

It wasn’t until recently that I realized all of the racism and hatred that stood behind Silent Sam. By reading my peers’ social media posts, I learned that Julian Carr’s speech for the statue’s dedication ceremony included allusions to beating black women and preserving the white race.  And that was only the start.  The statue was a constant reminder to black students of their past oppression and a university that chose to be passive about their current oppression.

For many of us, it’s hard to look at familiar things in a new light. Even as a person of color at this university and a resident of Chapel Hill for over 15 years, it took years for me to actively think more about the history of our state in the context of the symbols we pass every day.  After becoming more informed about the troubling history behind Silent Sam, I understood the protests and the backlash against it.

Even though I wasn’t at the protests the night the statue came down, I can say that I am happy that the statue is down; it’s a necessary step in the right direction towards progress for both the University and the state.

If you walk by the spot where Silent Sam once stood, the atmosphere hasn’t changed. Students are still hustling to get to class or meet their friends, except now, occasionally you’ll see someone whip out their phone to take a picture or stand in awe at the bare marble podium.