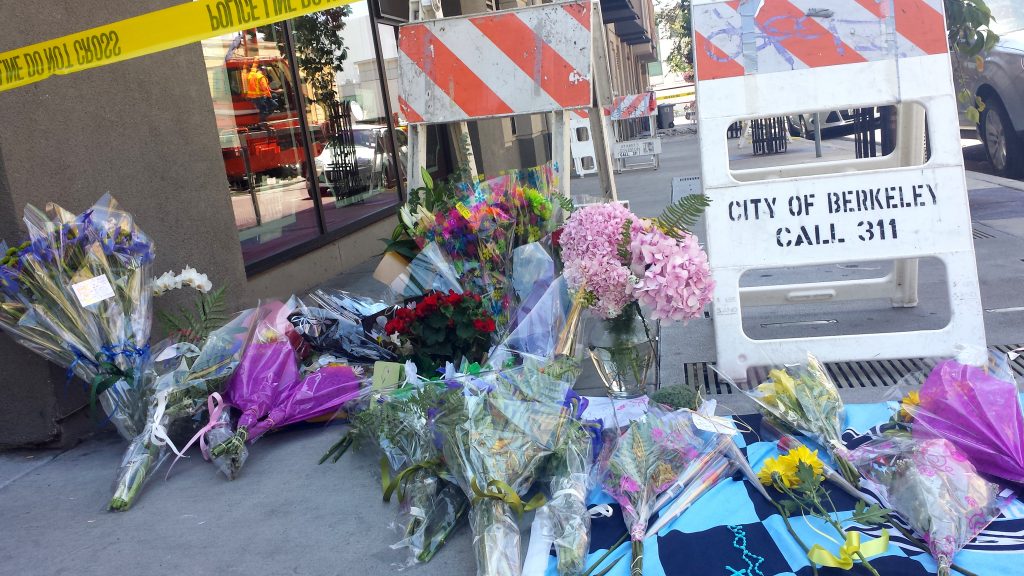 A memorial for the victims of a balcony collapse that occurred this past week in Berkeley, CA.

On Kittredge Street in Downtown Berkeley, a crane attempts to remove the broken balcony that this past week killed 6 students and injured 7 more. Most were Irish students here for summer to work — International students.

“It’s a very sad situation in Berkeley today,” said Ahmad Waqas, 23, who is on a student visa from Pakistan to study at UC Berkeley this summer. We’re at the International House Cafe near campus, and he’s having lunch with a group international friends. Twenty-three year old Ather Khan pipes in — he’s outraged. He thinks the owner of the building is responsible for hurting the students who were all in their early 20s.

Berkeley is a big draw for international students. The Irish students who were killed were part of a popular summer visa program. They were in the states, not to study but to work and travel. A lot them work at tourist attractions. There are about 700 hundred Irish students in the Bay Area on the J1 Visa. For Clare Nyhan, the program was like a rite of passage.

“It’s had sort of a profound impact because you just think of being here that summer like I was, a big gang of you know 20 people, and we were in parties all the time,” she said, “and you could just picture yourself easily being on that balcony.”

Nyhan was on the J1 Visa 16 years ago working for a real estate developer, and after she graduated from college in Ireland, the company sponsored her to move back to San Francisco. She says she wouldn’t be here today if it weren’t for the J1 Visa program.

“It’s set up to really help people with accommodation and leads for jobs and how to go about it. There’s a really strong support network here, I think, for J1 students.”

Nyhan part of the local Irish community coming together around this tragedy, offering spare rooms, for example, for family members that might want to come to Berkeley in the wake of the collapse.

“I can’t even imagine what the families are going through,” Nyhan said. “It’s just devastating.”

At a press conference the Irish Consul General Philip Grant said the students who lost their lives were only just settling in “And to have this happen, so early in the season, is something that has left us in shock and disbelief.”

Berkeley like other university towns always seems to be in a housing crunch, and in the past ten years, there’s been a flurry of apartments going up. Currently, there are 13 buildings under construction here. And like the building where the Irish students died, the city has no requirements that developers post weight limits on balconies.

Now the city is re-inspecting buildings, and across the bay, Mayor Ed Lee of San Francisco announced his city will be doing the same.