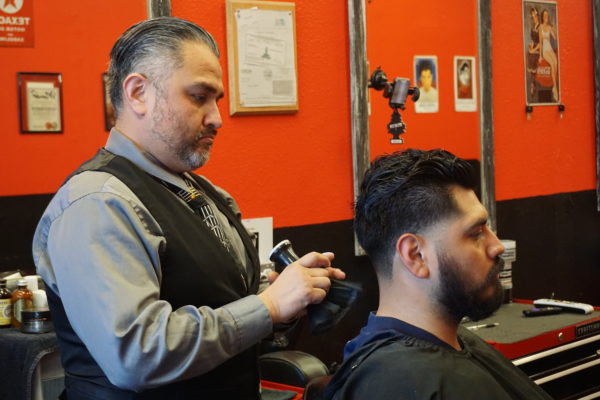 Growing up in Boyle Heights in Los Angeles, California, Lino C. Campos had to travel far from his neighborhood to get the kind of haircut he wanted.

“If you wanted a rockabilly or a teddy boy haircut, you had to drive quite a few miles out of here and pay extra bucks,” said Campos. When he grew up, he decided to bring the peluquería he never had to Boyle Heights. And his business stands out in the slew of barber shops that dot the neighborhood.

“Everybody liked those hot rod colors, usually always the red and black,” said Campos. “The theme has always been a bit of a greaser, rebel kind of style.”

The Cream Shop sits on the busy Cesar Chavez Street in the heart of Boyle Heights. On a Saturday afternoon, Campos offers customers a quality cut for 20 bucks, nearly twice as much as other local barber shops. Which is why not everyone in the community is happy that Campos came and started a business.

“We did get some people who came to us, obviously with profanity and some anger, saying to ‘Get out of the neighborhood,” Campos said.

Why would people in his own community have a problem with Campos starting a business? Some are calling it GENTEfication, a term that marries the word “gente”, Spanish for people, with gentrification. In a neighborhood that’s been battling gentrification for many years, Boyle Heights community members are polarized — can people gentrify the neighborhood where they grew up?

“When someone leaves the community but returns with a different mindset it’s no longer beneficial to to the community,” said Asiyahola Sankara, a community organizer in Los Angeles. Sankara works on anti-displacement policies in the city. He’s worried locals who leave, and later return to start businesses are contributing to the rising cost of living in places like Boyle Heights.

“You know if the person comes back and they have the same mindset as a gentrifier who’s never lived there before, then it’s just as bad.”

“People would say that I’m an example of gente-fication,” said longtime Boyle Heights resident Josefina López. She’s the co-owner of Casafina on First Street in Boyle Heights. It’s a restaurant she owns with her husband. Nearby is the community theater she started in 2000. The 48-year-old López grew up undocumented in Boyle Heights in the 70s and 80s. Back then, she says she didn’t have access to the cultural opportunities she wanted.

“I knew that there was gonna be a Renaissance in Boyle Heights and that I had to go leave this community, go get a college education, acquire as many skills, and then come back,” said López.

And that’s exactly what López did. She says she’s created businesses that consider the well-being of her community.

“Making the prices accessible, to the economy of this community. Secondly to keeping the aesthetics welcoming and accessible to the Latino community, the community that lives here.”

López says coming back and being successful offers Boyle Heights residents an example.

She tells the story of a local teen who knocked on her door, selling chocolate for a fundraiser. The kid noticed she carried herself differently, assumed she had a college education, and wondered why she came back.

Leaving, learning some new things, and if you’re Josefina López, coming back to share your skills.

If some people call it GENTEfication, she’s fine with that.

This story originally appeared in Boyle Heights Beat in Los Angeles. It was produced as a part of KCRW’s Boyle Heights youth radio project.