Hundreds of students at California Polytechnic State University, San Luis Obispo are speaking out as what they view as the university’s inaction on racism after photos surfaced of white students dressed as “gang members,” including one in blackface, at a local Lambda Chi Alpha fraternity event.

While the fraternity chapter has since has been suspended, Cal Poly President Jeffery Armstrong was quoted in a local newspaper saying the student involved is likely protected under free speech rights.

“If a student walks around on campus with their face painted black, they can do that,” he said in an article published in The San Luis Obispo Tribune.

Student activists on campus reacted to his comments by protesting on Friday, calling for Armstrong’s resignation and for the university to better address racially-charged incidents on campus, the lack of faculty and student diversity, tuition hikes and costly student fees.

Students chanted, “I am not Cal Poly Proud” and “hey, hey, ho, ho, Armstrong has got to go!”

At one point, during the protest, a group of students released a set of demands that included the expulsion of all of the Lambda Chi Alpha fraternity members featured in a widely-circulated Instagram photo, which shows the members throwing up gang signs in front of their fraternity house with the caption, “She want a gangster not a pretty boy.”

The protest coincided with the university’s annual open house, during which newly admitted students, supporters, parents, and alumni visit the campus.

“[President Armstrong] didn’t call it blackface — by its name or what it is,” she said.  “It’s not right. I think you need to call it hate speech or hate crime. I don’t know why he’s not taking a stand because he is making people of color and people who got affected by this feel irrelevant. Even though we are a small population on this campus, because we are feeling underrepresented, not represented at all, it’s an injustice and it’s not fair.” 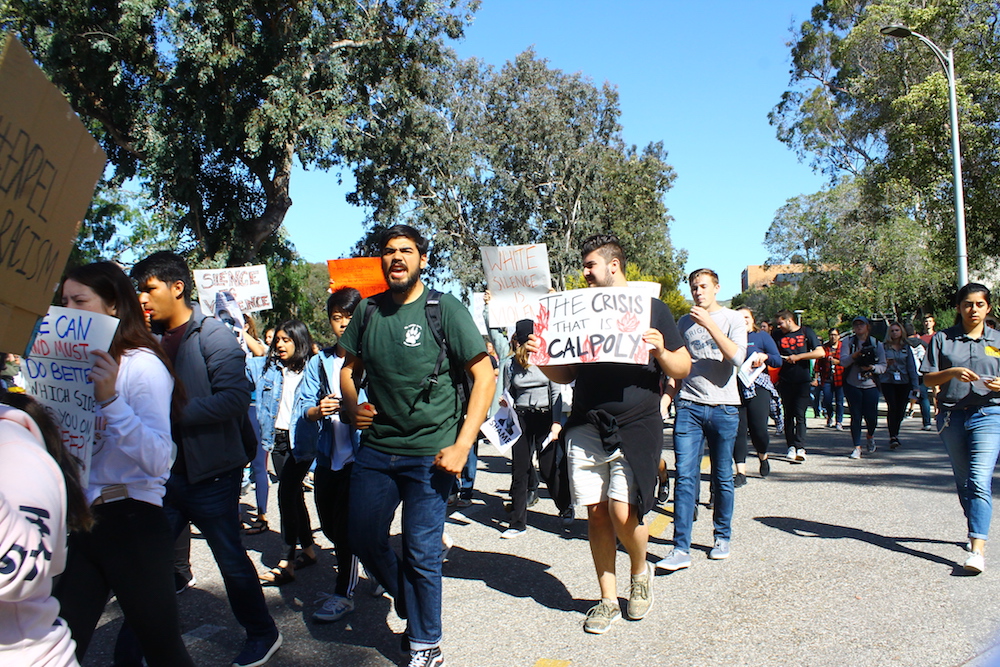 In an email sent campus-wide on April 9, one day after the photo surfaced, Armstrong wrote:

“Like many of you, I have seen the images that circulated on social media and find them to be painful and embarrassing… Hurtful actions, be they intentional or otherwise, have no place at our university and yet, regrettably, we experience them.  They are senseless acts of ignorance that injure and alienate valued members of our community. They must stop. We may come from differing backgrounds, but every one of us at Cal Poly is a human being who deserves respect.  In the most important ways, we are one family.”

According to the 2016 Cal Poly fact book, the university enrolls roughly 21,000 undergraduates.  Fifty-seven percent of the student body is white and only 166 students are Black. In 2017, Mustang News reported that income diversity at Cal Poly is the lowest among all 23 California State Universities, with 3.99 percent of its student body falling under the top 1 percent of the income bracket.

Another protest is planned for Saturday, when student organizations, including a majority of the cultural clubs, will boycott the university’s Open House Club showcase.