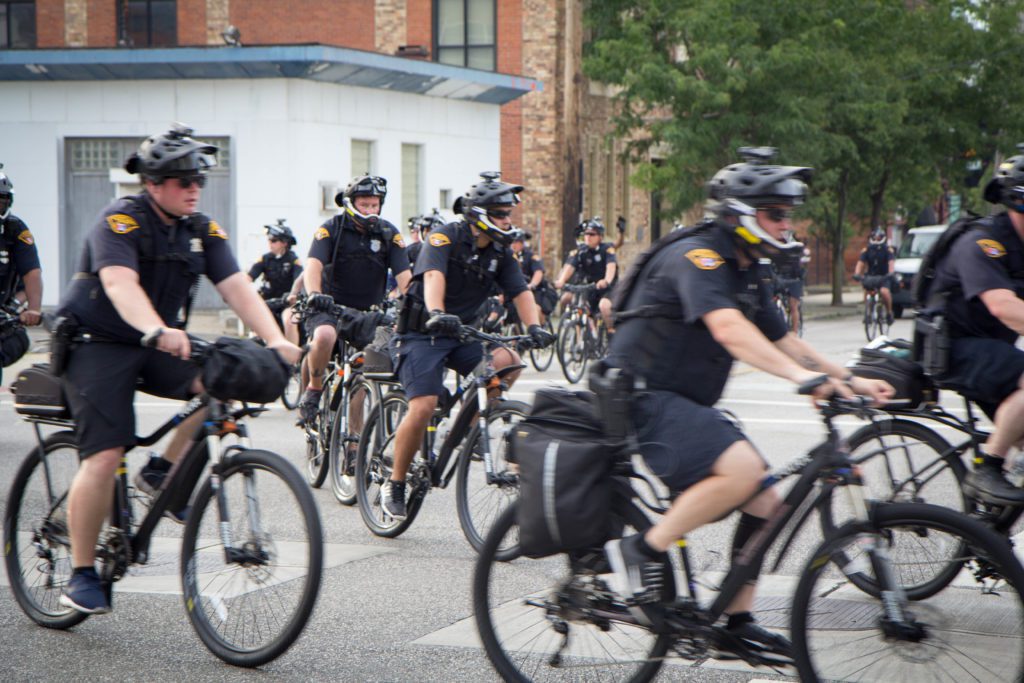 At the Republican National Convention in Cleveland, the police have been using a combination of horses, bikes, and on foot police to peacefully breakup rowdier groups and maintain order. The city bought 300 new bikes and helmets at a cost of almost $400,000.

Outside the Quicken Loans Arena on Wednesday, Cleveland police officers closed in on a group of protesters wearing black shirts emblazoned with the words “Revolution Nothing Less” and attempting to burn an American flag. For a moment, it seemed like the protest scene at the Republican National Convention was about to get dramatic.

But after a brief flare up, it was over.

Happening now Detentions made during protest outside the #RNCatCLE pic.twitter.com/ZFiCAoU7eD

At least so far, the RNC has been far from the powder keg of possible chaos, unrest, and violence that many around the country feared it might be. With only small protests and rallies of a few hundred people sprouting up over the past few days, the streets have remained largely peaceful.

Although verbal altercations have broken out between opposing protest groups, the number of arrests during the convention is still low. As of Tuesday night, only five arrests have been made total, which stands in stark contrast to the previously estimated 1,000 arrests per day for which the Cleveland Municipal Court had prepared. Even the incident on Wednesday appeared to result in a handful of arrests.

The contrast between the security concerns going into the convention and how the convention has actually unfolded thus far is shockingly different. During the 18 months of preparation here, the fear was that the Cleveland convention could turn into a repeat of the 1968 Democratic National Convention which rocked the city of Chicago with mass riots. The reports the city of Cleveland released as to how they were spending their $50 million federal security grant did not help the perception that this convention could be calamitous as the spending was foreboding to say the least. 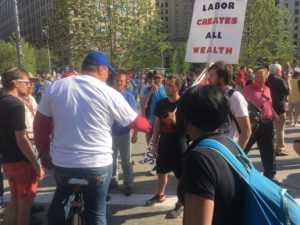 A Donald Trump supporter (in white, left), argues with a man holding a “Labor Creates All Wealth” sign in Public Square. This was one of many small, random arguments happening in the square at the 2016 Republican National Convention.

The city bought 2,000 sets of riot gear and batons, 24 sets of ballistic body armor, thousands of body cameras, and upped their original protest insurance from $10 million to $50 million. Cleveland also recruited thousands of police officers from around the country to bolster the department’s personnel from 1,500 to 4,000 police officers, and that does not even include the more than 4,000 federal law enforcement officers who will be present during the extent of the convention. On top of that, Cuyahoga County freed up 200 beds in the county jail to accommodate the previously estimated 1,000 arrests per day.

So far, none of the anticipated turmoil has come to pass.

Most officers on the streets have been in light body armor and normal patrol blues, however there is noticeable heightened security in the form of Secret Service officers in flak jackets and K-9 units surrounding the arena. Still, there is no riot gear in sight. But what has been most striking is the tactics used by law enforcement to seemingly infuse calm into a tense situation.

One of the interesting tactics is how police are utilizing horses, bikes, and bodies. Prior to the convention, Cleveland bought 300 new bikes and helmets at a cost of almost $400,000 and increased their mounted unit to 30 horses. From observation, the police have been using a combination of horses, bikes, and on foot police to peacefully breakup rowdier groups and maintain order. For example,  when large gatherings have devolved into arguments, my fellow reporters and I have seen cadres of police on bicycles ride straight through crowds, quickly separating agitators. 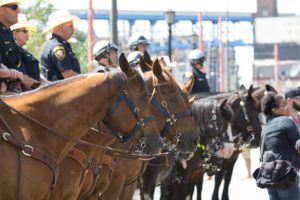 Mounted police officers at the Republican National Convention stand by.

The story here in Cleveland has become less about the police being armed to the teeth and ready for mayhem and more about the intelligent policing that has kept the city relatively quiet.

However, it is important to note that the full extent of Cleveland’s preparedness has yet to be tested as protests have been dramatically smaller than expected. Thursday is the last day of the convention, the last chance for a major protest to occur, and the last opportunity for law enforcement to prove whether they are actually creating the calm.