What can we learn by looking at the racial makeup of Advanced Placement courses in American high schools? The U.S. Department of Education recently released its 2011 – 2012 Civil Rights Data Collection numbers. The information includes data about enrollment in AP classes, participation in the SAT / ACT, and suspension and expulsion numbers — delineated by race, gender and disability status.

According to a press release, this is the first time since 2000 that the federal government has collected information from all 97,000 public school institutions in the county. You can search for your school’s info here.

Youth Radio reporter Bianca Brooks wrote about the racial inequities in the AP classes at her high school in Oakland for KQED.  Here’s an excerpt of her observations:

If you walked into my morning history class just a few weeks ago, you might have heard an excited teacher sharing news about the Arab Spring or the hum of groups discussing character development in our latest book. In a nutshell, you would’ve seen valuable, genuine learning.

But just on the other side of the school, where most Latino and fellow black students attend classes, you might have seen paper flying across the room and students waking up from their morning naps. Two very different classrooms — the very same school. …

[My] school doesn’t tell students that if they take remedial English, their SAT scores won’t be competitive on a national level. Nor does it tell them that they might just be bored and unchallenged. One day at school, I was complaining to a friend about how overwhelmed I felt by my AP classes. She said, “You’re lucky. I’ve only been assigned a single essay this whole year” — and we were already five months in. My friend told me she would’ve tried much harder to get into advanced English if she had known where she’d end up. …

Part of me is empowered, knowing that among a small percentage of African-American students excelling in elite courses. The other side of me feels angry knowing that 80 percent of my black peers who had the potential to succeed in AP classes, didn’t sign up.

(For the whole commentary, listen or read here.)

Using the Dept. of Ed’s new tool, I checked out what the AP enrollment really looks like at Oakland Technical High School, which Bianca attends. 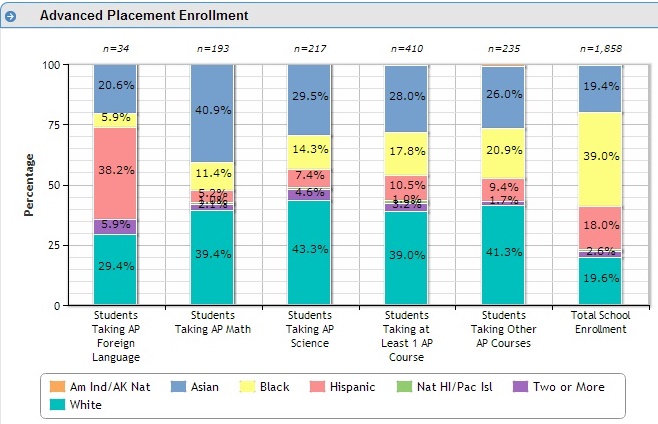 Whites and Asians at Oakland Tech represent the minority of AP students — while African American and Hispanic students make up more than half the student population. What does your school’s AP breakdown look like? Tweet us a screenshot @youthradio.