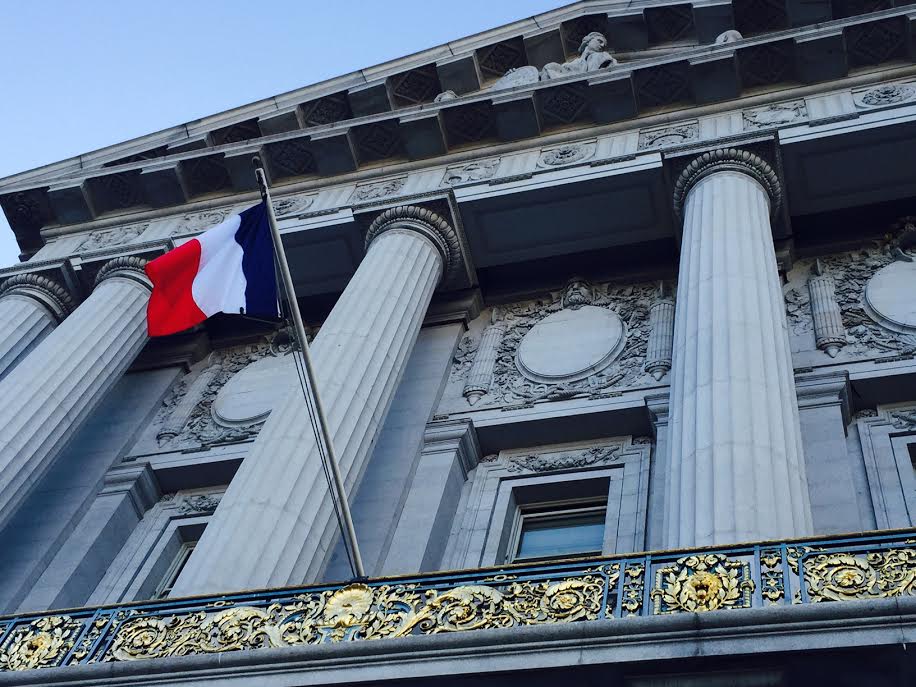 A French flag billows from San Francisco City Hall in solidarity with Paris.

The school is also pretty French. Out of about 1,100 students, most speak the language. Many have family and friends in France. So on Monday morning, instead of playing in the yard before school, elementary students reported directly to class to meet with teachers.

Laurent Scotto di Uccio, who teaches 5th grade French, describes the encounter with his students: “So my first question was why are we here, so the kids were like, ‘We don’t know yet.’ So I said, ‘I don’t know if you know, but something happened in Paris and in Lebanon not long ago. Did you hear about it?'”

All 44 of his students knew about the attacks already, so he prompted them: “Okay, can somebody tell me what happened?”

One by one, the ten and 11-year-olds started describing the attacks in their own words. But they quickly moved to more complicated issues, like ISIS. The class also discussed why the bombings in Lebanon didn’t receive the same attention.

Di Uccio was surprised that the discussion wasn’t about black and white, good vs evil. “As an adult and as an educator, it’s hard to talk about things that are emotionally impacting you. And they were,” he said. “People died. But in the meantime, you don’t want to impose anything on your students. You don’t want to be in a place where you tell them what they have to think about things. So, that was a time that you remember for a while as a teacher.”

Older students, like 15-year-old Barbara de Alfaro, were worried about the West’s reaction to the attacks.

“I’m going to be a terrible person and plug something that we learned in US History a week ago,” she said. “FDR’s quote of, ‘The only thing we have to fear is fear itself.’”

Fourteen-year-old Simon Chanezon says he’s not really afraid of the terrorists — he’s most afraid that the political power could shift in France, empowering French far right parties like the National Front. “If we start to get corrupted, like politically inside the country, it might be very dangerous,” he said. “As a half French, half American citizen, I might lose my nationality.”

But for 17-year-old junior Lorenz Menendez, losing sight of the bigger picture is what concerns him.  “ The main goal of a terrorist attack is to instill fear, and also secondly to expect a response from the country that you attack,” he said. “So, on their extremist websites, they take things we do in the West and spin the story in a way to make it look like we’re bad people. And that’s how they recruit people. What we have to watch out for is that we don’t play into their hands.”

The students we talked to said they hope the reaction from France and the West isn’t an over-reaction. They said we don’t need another 9/11.