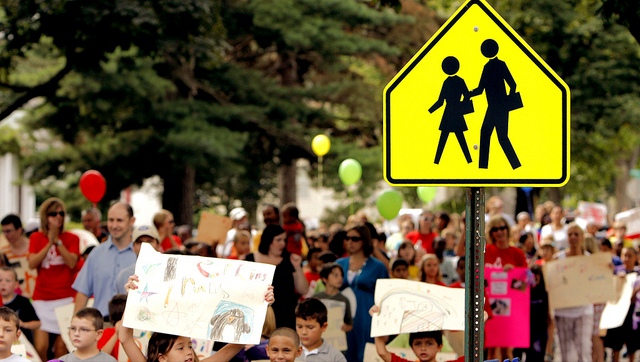 In my previous life as a high school English teacher, I often felt disconnected from everyone making the decisions that affected how I did my job. A new curriculum handed down from the district. Tutorials to learn how to process student data. Elective classes swapped out for study halls. I just learned to roll with the punches.

But crowdsourcing tools are slowly working their way into the education policy world, designed to give teachers and district employees more say on big decisions that affect their school environment.

A notable success story is the Poway Unified School District in San Diego, which was spotlighted in Education Week for building a site called InnovationU. The site called for all district employees to submit ideas that could help improve the safety of students and staff at school.

Teachers, bus drivers, counselors and after-school staff weighed in, submitting, discussing and voting on ideas. An algorithm sorted the ideas and gave users “reputation points” as they contributed. Popular ideas included installing security video cameras and panic buttons for receptionists, according to EdWeek. But the idea that rose to the top focused on students’ well-being: to create a comprehensive support services program for grades preK-12.

The group of people behind the idea is currently drafting an in-depth proposal for implementation, and the school board already approved $600,000 to make the idea a reality, according to Rich Newman, the school district’s director of learning support services.

The experiment went so well, he told me, that Poway will launch its next crowdsourced challenge this September. “The most important thing that’s changed is the intangible — the culture change that’s occurred …. Everyone now feels the sense of being invested in the system and having the opportunity of an idea changing the entire district.”

Highline Public Schools in Washington state also tried crowdsourcing to solicit ideas on a district-wide strategic plan, and created a site called Imagine Highline. It didn’t work as well as organizers had hoped. “We tried to set it up so that it wouldn’t just be ‘complaint central,’ ” said Catherine Rogers, communications director for Highline Schools. “But the reality is since we haven’t had a place to register complaints online, it opened that door for people.”
Imagine Highline was open for about eight months and closed in June. There were many one-off ideas thrown around, but Rogers said that the bigger themes from the discussion eventually made their way into the strategic plan. “I can’t point to any one specific idea, but it’s the overall tones, sentiments and themes that emerged: high expectations for students, adequate support and training for teachers, time for teachers to internalize and incorporate the training they received in professional development,” she said.

VIVATeachers takes a different approach — pitching specific policy issues to a limited community of teachers. The nonprofit that launched in September 2011 gets buy-in from a policymaker before crowdsourcing a question, like whether teachers should be allowed to be armed in schools.

After a discussion facilitated by a VIVATeachers moderator, an algorithm identifies the participants whose “ideas are generating a lot of thought and activity,” said Elizabeth Evans,  founding CEO of VIVATeachers. That smaller group of teachers writes a proposal synthesizing the ideas of the group. VIVATeachers then sets up a meeting between the teachers and the policymaker. They’ve met with governors, mayors and twice with Education Secretary Arne Duncan.

“Before anything goes public, there’s a community built …. They feel part of something even bigger, and when they step up to the microphone or meet a governor or superintendent it’s a little less nerve-wracking,” said Evans.

When I was a teacher, I remember having to force myself to step out of the negativity that permeated my school’s hallways. At the copy machine, during passing periods and even at Friday happy hours, teachers would vent about students getting in fights or administrators making their lives difficult. I love the idea of teachers being encouraged to think positively about school as decision makers — instead of listing 100 reasons why the school system will fail.

It’s also appealing to be able to contribute ideas anonymously, without the fear of being on the wrong side of an issue politically. However, anonymity might not encourage the kind of thoughtful responses that made Poway’s experiment a success.

It might seem far-fetched that this can actually work — that a district employee will have a brilliant idea for changing the system, and that it will garner unanimous support from the ranks of teachers, administrators and community members. It’s easier to imagine an online free-for-all — a new platform to vent and passionately disagree with each other.