Twenty-four-year-old geologist Daniel Robinson went missing on June 23 when he left his work site in Buckeye, Arizona. His vehicle was found in the desert a month later on its side with a pile of his clothes next to his car.

Daniel’s father, David Robinson, who lives in South Carolina, moved to Arizona to find his son after he and his family felt like they weren’t getting the information they were looking for from the Buckeye Police Department.

“My frustration so far has been a lack of real action, speedy action and care,” Robinson told YR Media Saturday before conducting another search. “It took a while to get the national attention needed also because what is important is that the more you get the story out the more eyes you can get on my son’s situation more people can see that the reach is far out.”

The Robinson family hired a private investigator to further assist with the case.

When asked if he felt like the police failed his family and other families alike who have lost loved ones in the area he said, “Yes and it’s sad to say.”

“No family ever knows what life is going to present, you’re sitting down on the back porch one day like myself and the next day you know I’m out here searching for my son,” said Robinson.

There has been a pattern of Black men and women that have gone missing for quite some time.

According to Census.gov, nearly 40% of missing persons are persons of color, yet, African Americans only make up only 13% of the population.

“As a community, it’s a bigger problem than just my son,” said David Robinson. “It’s not just about my son, it’s a growing problem. We’ve been recognizing it now, people of color go unheard. So we have to make some avenues of change within that dynamic.”

Another search will be held Saturday. Anyone interested in helping with the search can go to searchfordaniel.org. 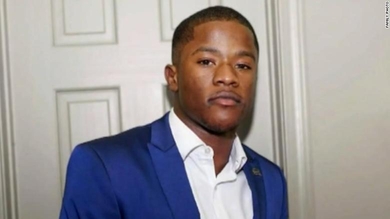