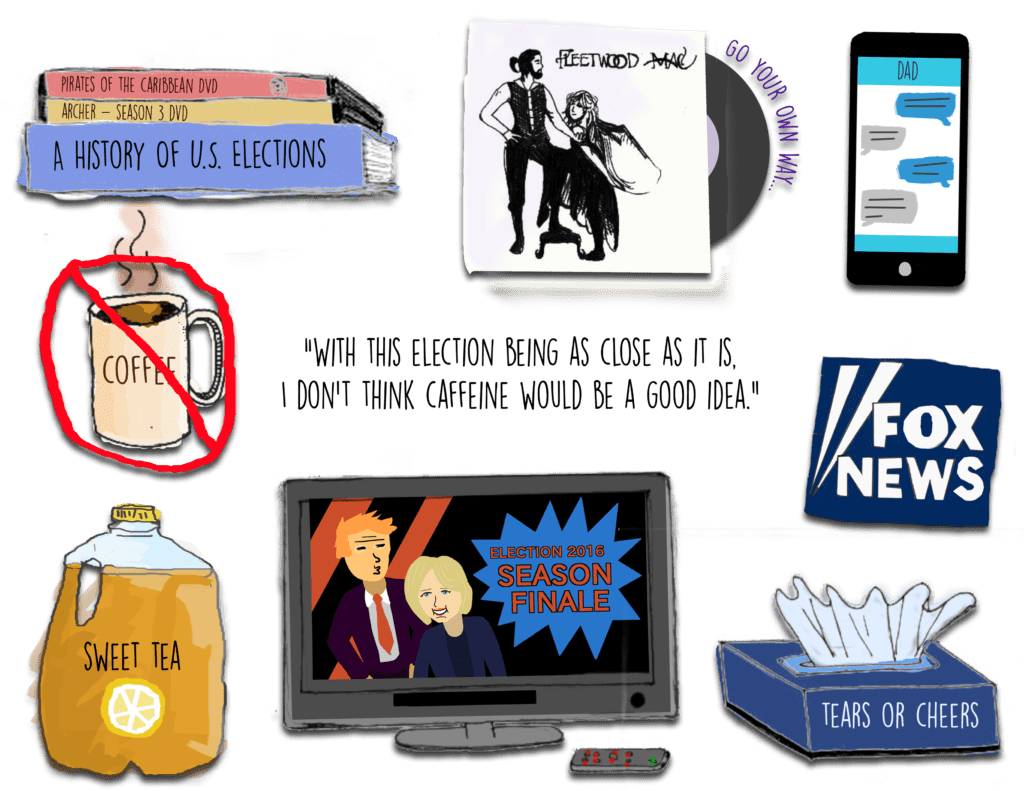 From Republicans in Georgia to Democrats in California, we illustrated what young people from around the country said what they would need to get through election day 2016.

Mood: I’ll be nervous. I don’t have classes that day. At night, I’ll be watching the returns with other Republican friends from school. I’ll stay up late to watch the returns.

Music: I would probably play “Go Your Own Way” by Fleetwood Mac, some classical music, or movie soundtracks by Hans Zimmer.

Inspirational Media: A lot of people have turned this election into an all or nothing like “if X wins, it’s the end of the nation.” When I feel like that, I look at history … and read entries from elections where the country was literally at war with itself. A lot of people catastrophize and in this instance it may not be productive. We will get through this. How will I calm myself? I’ll be honest, whenever I get anxious like this I’ll watch movies. I’ll end up watching the Pirates of the Caribbean series, and then a TV show like Archer.

Caffeine of choice: I don’t drink caffeine especially when I’m anxious. With this election being as close as it is, I don’t think caffeine would be a good idea.

Game Plan if Trump Wins: If Trump wins the election, I’m going to call my favorite Democrat friend, whom I respect, and respectfully rub it in his face. I will definitely be calling my mom and dad. I’ll probably also eat food, tear up, and take part of the mass euphoria.

Game Plan if Clinton Wins:  If Hillary Clinton wins, I will do this thing that a very smart man once taught me about, which I guess you could say is an inward journey. Were I twenty-one, I’d definitely take part of the fruit of the vine. I’ve devoted so much to this election…I’d be sad. I’d engage in comfort eating… I’d want to be by myself, since [my Republican friends] might catastrophize. They might say the election is rigged, but I [don’t think that]. If she wins she wins. 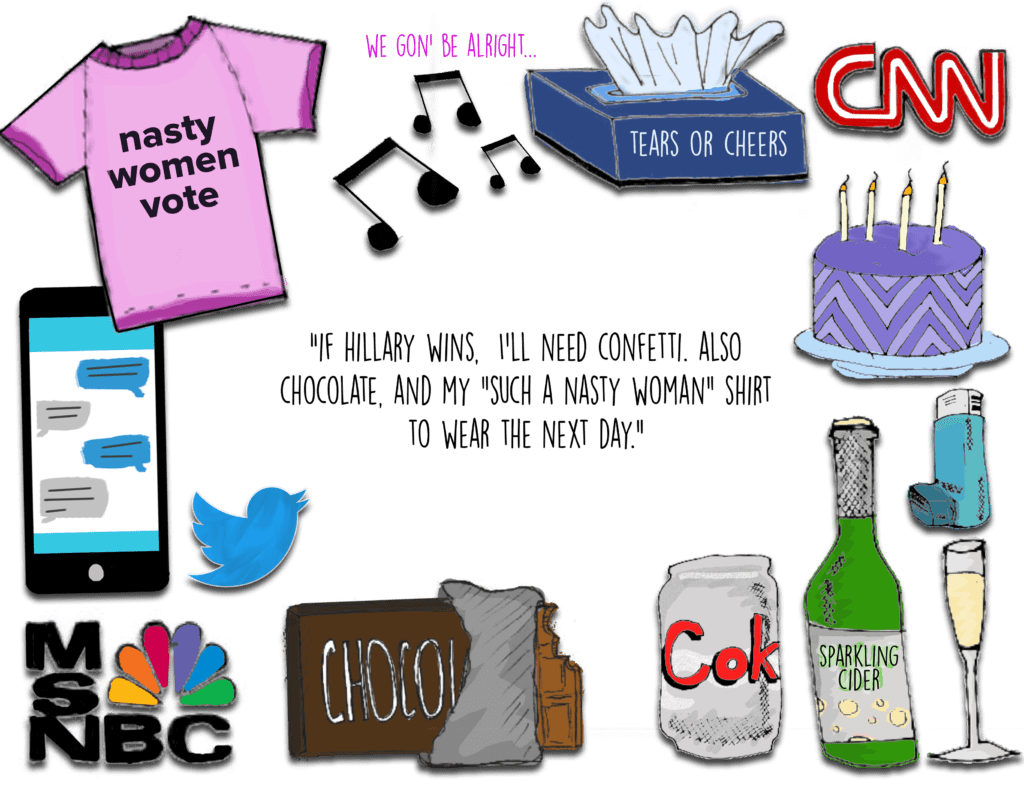 Mood: Hopeful. I’ll watch the returns at home with my family. I’ll be scanning social media and MSNBC.

Music: We Gon’ Be Alright – Kendrick Lamar and Man in The Mirror – Michael Jackson

Game Plan if Trump Wins: I’ll need a tissue box for crying, an inhaler (for shortness of breath), ambulance on stand by (in case I faint), chocolate (in various forms), tea (to calm my nerves), information on how to impeach a President (kidding), money to apply to colleges in Europe and Canada, and a hug from Barack Obama

Game Plan if Clinton Wins: I’ll need confetti! Also chocolate (in various forms), corny pop music for happy dancing (think Taylor Swift, Carly Rae Jepsen) along with We Are The Champions playing in the background, that tissue box again( for tears of joy), A “Such A Nasty Women” shirt to wear the next day, sparkling cider for a celebratory toast, and Trump supporters’ reaction tweets for comedic relief 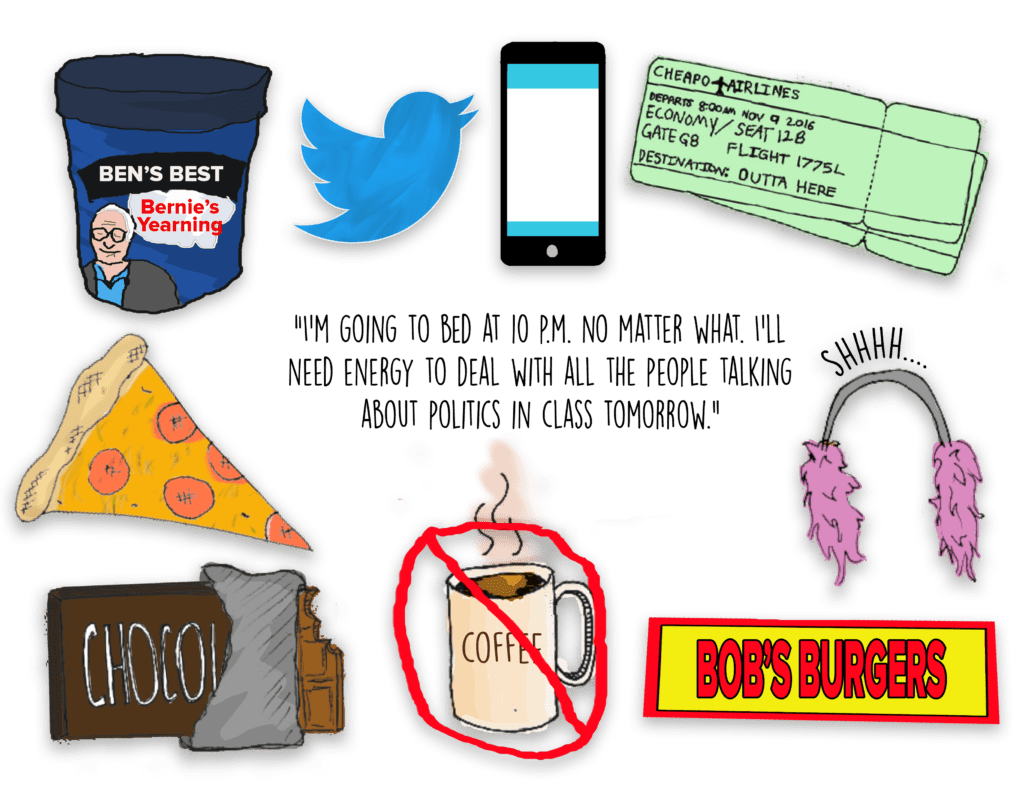 Mood: I feel pretty ambivalent about the whole thing. I want to be informed, so I’m paying attention, but I’m not feeling particularly engaged. In the evening, I’ll be at the boxing gym trying to distract myself from the election as long as possible. Still, I’ll be checking in on Twitter. My roommates are both socialists who didn’t watch the debates, so I figure I’ll do what I did then: watch on my laptop in my room alone. My bed is my comfort object. I’m going to bed at 10 p.m. no matter what. I’ll need energy to deal with all the people talking about politics in class tomorrow.

Music: No clue. I think silence would be nice.

Snacks: Bernie Yearning ice cream by Ben and Jerry’s, some really rich foods like cake and lots of sweets and fatty foods like after a breakup.

Inspirational Media: I will want to get off social media since it’s been so intense. I’ll want to read a comforting book, go analog. I find myself reaching for things like The Little Prince for comfort. I might also watch cartoons like Bob’s Burgers or Rick and Morty.

Caffeine of choice: No caffeine. I have class the next morning, so I plan on going to bed at 10 p.m. even if the returns aren’t in.

Game Plan if Trump Wins: I haven’t really considered that possibility. I’ll be in my denial phase. I’ve been saving for a trip to El Salvador, so I’ve been joking that I’ll just move there, but probably not.

Game Plan if Clinton Wins:  I won’t be celebrating, but I’ll probably still call someone up and breathe a sigh of relief. I’m not interested in engaging in conversation with people who are like, “Hooray.”