M. is a 17-year-old ward of the court in Los Angeles’ Central Juvenile Hall. 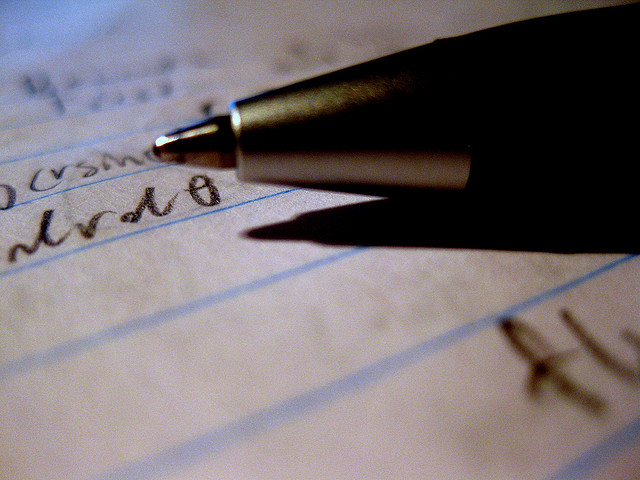 I would brush your hair and it would come out in chunks.
I always stayed quiet never cried much.
Although when I was alone I would cry my eyes out.
Cursing at God, in Him I had so many doubts.

When you opened the door
I would dry my tears, trying to show you that you could talk to me and that I was mature. You would brush me off and say you’re too tired to talk.
Yell at me, and tell me to go outside and play with my chalk.
Not understanding I was 12 and I didn’t play with chalk anymore.
I would go outside and try to hide what happened behind closed doors.
People would ask me why I looked so sad or what was wrong with me.
I would lie and say I just watched a sad movie.
I know my excuses they did not believe.

As I grew older I started to rebel.
Going out all night, drugs I would sell.
I thought you would notice but you never did,
never even cared that you had a kid.
Things only got worse with the thugs I would hang
and a little after that I started to bang.
I thought I was cool and that I was the shhh.
I was robbing houses, cars, and hitting licks.
When I would get arrested you would come and pick me up.
I was yearning for your attention but you never gave a tuck.

Then you disappeared left me to rot in jail.
I spent 11 months sitting in that cell.
It had been almost two years since I had seen or heard from you.
In August 2014 all hell broke loose.
They came to my room and unlocked the door
and told me I was going to the hospital, I didn’t have to stay anymore.
As we were driving to the hospital I was asking why,
but nobody would look me in the eyes.

The doctor came in and asked questions about you.
I told him I hadn’t seen or heard from you for one and a half almost two.
He told me had some very bad news.
I heard his words but I didn’t believe they were true.
They asked me to go inside the room and identify the body.
He just kept saying how he was so sorry.
When I walked in the room I thought it was a joke.
He told me this was the long-term effect of heroin, meth, and coke.
You didn’t look anything like you used to.
They told me you only weighed 102.
At 5”11 that’s as small as a stick,
you looked like a starving African kid.

At that point I fell to my knees,
screaming and crying how I was sorry.
I was sorry for everything I said to you, Mom.
I was sorry for all the things I did wrong,
maybe if I just behaved
you wouldn’t have left. You might have stayed.
I wanted to tell you, Mom, I forgive you.
But forgiving myself is something I could never do.

This poem was originally posted on The Beat Within