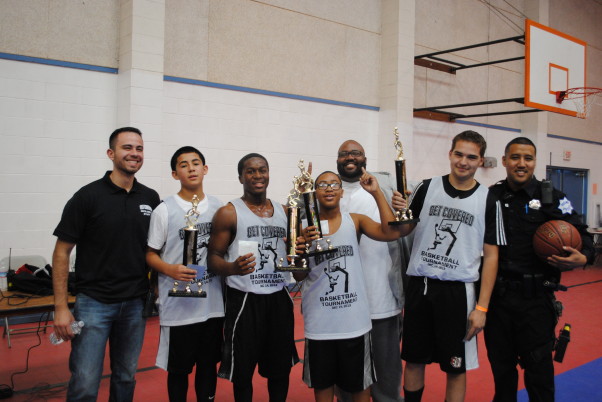 Above: Office Mike Martin, far right, poses with the winning team of young people after a community basketball tournament.
Photo by: Mike Martin.

Editor’s Note: Officer Mike Martin is the Youth Liaison Officer for the Fresno Police Department. A native of Fresno, Martin joined the force in 2005 and has since then worked in various assignments with the city’s youth. He describes his current role as a “go between” for Fresno law enforcement and young people who he says often feel “unfairly targeted.” Martin spoke with The kNOw youth reporter Fernando Flores Duran, 15, about building trust with the community, entering the law enforcement profession, and about the recent protests over police violence nationwide.

Why did you decide to become a police officer?

My dad was a police officer for 30 years, so I grew up in a law enforcement environment. I’ve been a full officer since June of 2005. Since then I’ve worked on various assignments: I was part of the district crime suppression team which targeted violent crime, gang members, drugs. From there, I did school resource, where I worked at a continuation school for kids who got expelled from Fresno Unified. My current position is Youth Liaison Officer.

What do you do as a Youth Liaison Officer?

I act as the go-between for the police department and the youth of Fresno. I typically work with youth ages 14-24. I plan different events, such as midnight basketball, that try to reduce violence in Fresno. We’ve also done trainings at the Institute of Technology, where youth used a simulator that let them go through a real-life scenario as a police officer. I’ve also been a big part of Fresno BMOC (Boys and Men of Color). Really, I’m getting out into the community to shed a positive light on the police department.

What drew you to working with young people?

I always wanted to teach, so when the school resource position became available I knew I wanted it. It was a small, but very challenging environment. Many of the students had negative perceptions of the police, but I was able to see them everyday and build relationships. And students started opening up to me and we were able to break down the barriers.

As a person of color, what has been your experience in law enforcement?

I haven’t had any problems as a person of color; I’ve had a lot of opportunities within the department. But, as far as the community goes, it’s important to reflect the people you serve. (Chief Jerry Dyer) has said that he wants to get more men and, especially, women of color in the department.

How have your fellow officers responded to the recent wave of protests over police violence in cities like Ferguson and Baltimore?

I know as an officer, you are always aware of what’s going on, and you don’t want to do things that will get you in trouble. I definitely think officers are aware of the tensions within the community. Which is the whole reason my position exists, to build bridges especially with youth … [many of whom] feel unfairly targeted or disrespected on the streets.

How do you build those bridges?

I think it really comes down to communication, talking to youth and explaining why we do certain things. It’s important for police officers to take the time to explain why they stopped someone. But it goes both ways. It’s interesting, one of the young men from Fresno BMOC just went on a ride-along because he wants to become a police officer. So, I text him to see how it went, and he had a really good time, but he was surprised at how disrespectful people were to the police officers. That really shocked him. So, we need to fix that. And it’s really hard. But it starts with communication.

What are your biggest challenges to building a better relationship with the community?

First of all, citizens have to feel safe in their community. If you don’t feel safe in your neighborhood then you aren’t going to approach a police officer. It’s a big issue. Especially after something happens, people don’t talk to the police because they’re afraid of retaliation. Getting over that involves making these neighborhoods safer by working with the community, the churches in the area, and the community based organizations. There are also a lot of negative perceptions out there. Young people don’t like talking to police officers. Getting over that barrier, that’s the biggest part of my job.

Where are the opportunities?

The opportunity comes in working with communities. The police department can’t fix all the problems in the community. It’s up to the residents to help us tackle crime and address other problems. We can always come in and help, but it really takes community buy-in.

In Fresno, the [planned] youth council is huge. We tried to find models elsewhere but couldn’t find anything at all, so I think this is one of the first police youth councils that will report directly to the chief. And really hearing the concerns of the youth can help prevent problems like what happened in Ferguson.