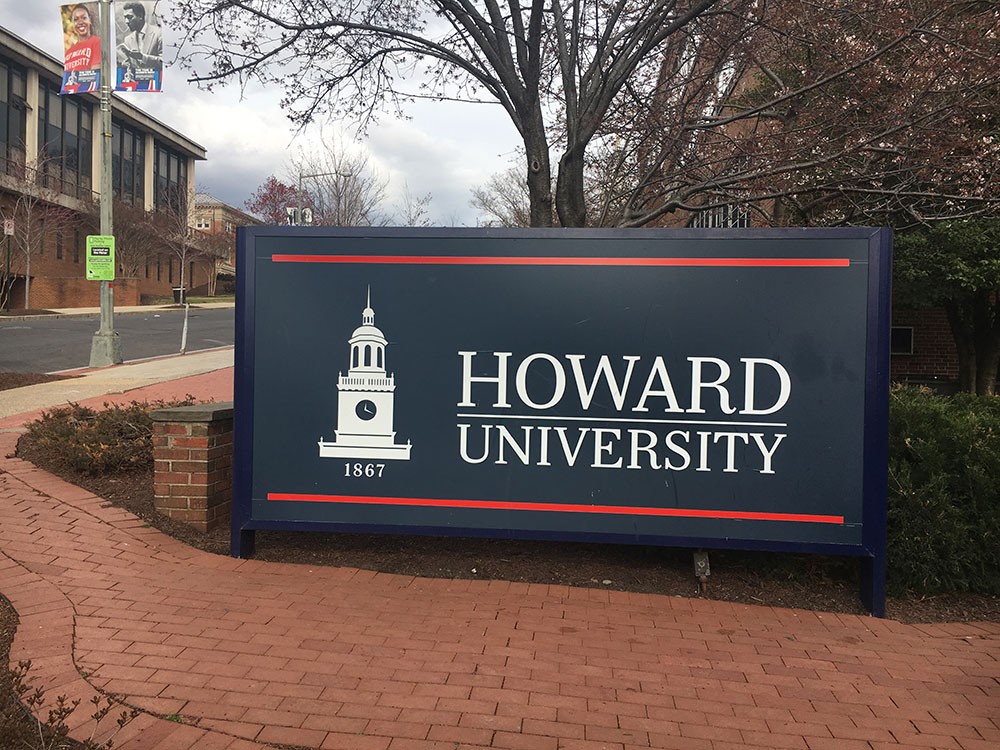 Editor’s Note 4/5/2018: Howard University students are on day eight of the sit-in. In a press release, organizers said the protest will continue until their nine demands are met and they are “prepared to occupy the administration building until the completion of the negotiation process….”

Students at Howard University, a historically black college in Washington D.C., are on their sixth day of occupying the school’s administration building.

The student sit-in, which was organized by HU Resist, began Thursday, a day after university president Wayne A.I. Frederick announced that six employees were fired last year for misappropriating university-based grants. Organizers say the sit-in protest will continue until their nine demands are met — which include the resignation of President Frederick, adequate housing for all students under 21, addressing the campus rape culture, and disarming campus police officers.

This isn’t the first time Howard students have taken over the school’s administration building. According to The Hilltop, Howard’s student newspaper, there was a four-day takeover in 1968 which led to the shutdown of the school. 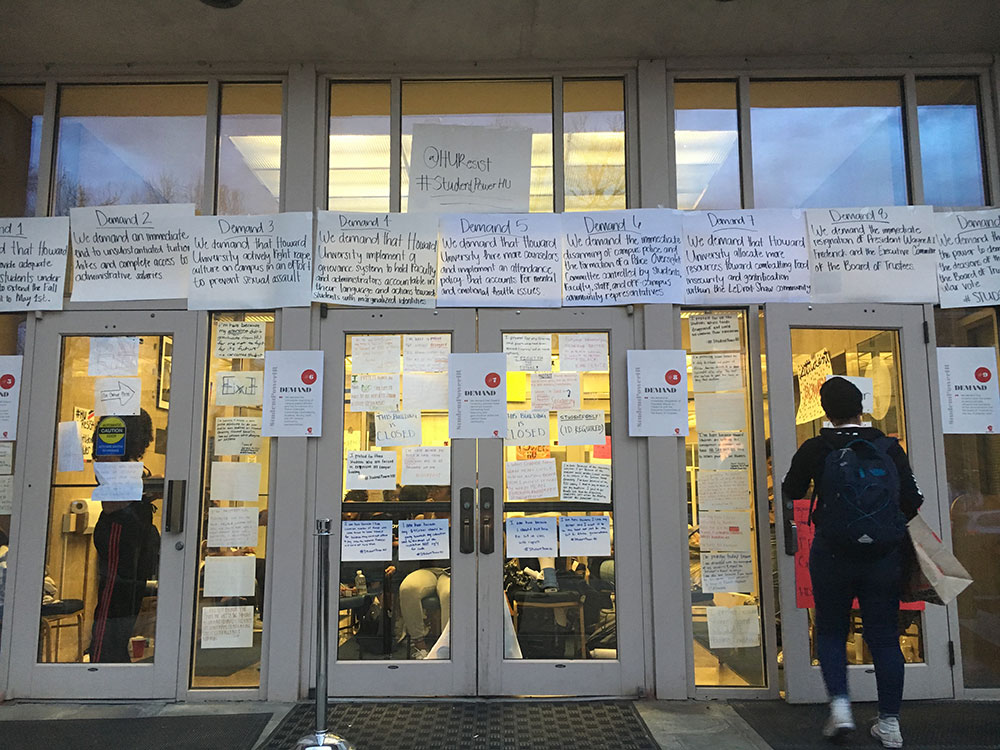 The students’ demands are posted on the outside of the school’s administration building. Photo by: Kyra Azore

Sunday, HU Resist organizers announced the university’s board of trustees met one their demands — they will extend the deadline to submit a fall 2018 $200 housing deposit until May 1st. The university also agreed to provide adequate housing for students under age 21.

In the five days since the administration building takeover, roughly 350 students are currently participating in the protest. They spend time playing cards, receiving tutoring and homework help from graduate students, doing art therapy and strategizing with Howard alums. The open door policy of the sit-in means students can come and go freely to shower and attend class, but administrators are barred from entering the building. Many university faculty members are supportive of the demonstration.

Howard University faculty are in solidarity with the students occupying the admin building, fighting for their 9 demands. Here’s their letter of support #StudentPowerHU #HUResist pic.twitter.com/zoZROQyIrH

Youth Radio correspondent Kyra Azore, a junior at Howard University, spoke with Oluwatimilein ‘Timi’ Bamgbola, one of the student protest leaders, about the purpose of their demonstration and how long they’re willing to occupy the building.

Kyra Azore: Why have you and the students taken over the Administration Building?

OLUWATIMILEIN ‘TIMI’ BAMGBOLA: So basically, the students are taking over the administration building because we have noticed a lack of student power within Howard University. The list of nine demands was placed by a group of students known as HU Resist and we already declared that we are tired of the lack of power that we have as students. The lack of transparency and policies that have been put in place are not helpful for us. We want to hold our administration accountable for their actions and to ensure that they’re doing what they’re supposed to be doing to make sure that this is a safe campus for everybody, especially the marginalized communities.

Why did HU Resist choose this form of protest?

This is the only way Howard listens. And that’s also how we saw our past alums do it. That’s how they got stuff done. We are staying here until all our demands are put into place. So that’s up to the Board of Trustees and President Frederick.

In the words of Frederick Douglass, “power concedes nothing without a demand.” These are our demands. #StudentPowerHU pic.twitter.com/pnFOefF2KM

How many of your demands can be rectified with increased transparency and involvement with university decisions?

All of them, honestly.

Your list of demands include issues regarding gentrification in the neighborhood surrounding Howard and some say that those are out of the jurisdiction of the university. Why was it important to include those and what would you like to see done in regards to those issues?

The Howard administration consistently talks about truth and service. In fact, we are an open campus because we’re saying that we’re here to serve this outside community. How are you going to say that you’re about truth and service and yet implement housing that the black community within the LeDriot-Shaw [neighborhood] can’t afford? Just a bit hypocritical.

The students’ demands include a wide range of issues. What’s the most important one that needs to be addressed immediately?

So, what we’re really focusing on is the housing demand, the sexual harassment demand, and the policing demand. When it comes to the housing, we demand that the university provide adequate housing for all students under the age of 21 and extend the fall 2018 housing deadline for May 1st.

Recently, there was a housing crisis, which I’m not sure everyone knows about. There’s just been lack of housing, especially with the new freshmen that came in. A lot of kids were put into triples that were initially designed to be double rooms.  Then for them to later sell three properties…and lease them out to be luxury apartments, that we as students can not afford for off-campus housing, at all.

What’s your response to President Frederick and the Trustee Chairman regarding your demands?

I believe that not only did he [Frederick] basically reiterate things that we’re already aware of, but we are trying to establish that they are not working. And he said things that were just untrue. I’m going to cut to the chase, it’s just B.S. Basically, both of those emails were just to save face. We’re not even going to acknowledge it like those are complete garbage. And they’re consistently just tweeting things to save face, to look good. It almost looks passive-aggressive.

What do you say to students who feel like this isn’t their fight or that these issues don’t affect them, so they’ve chosen not to participate?