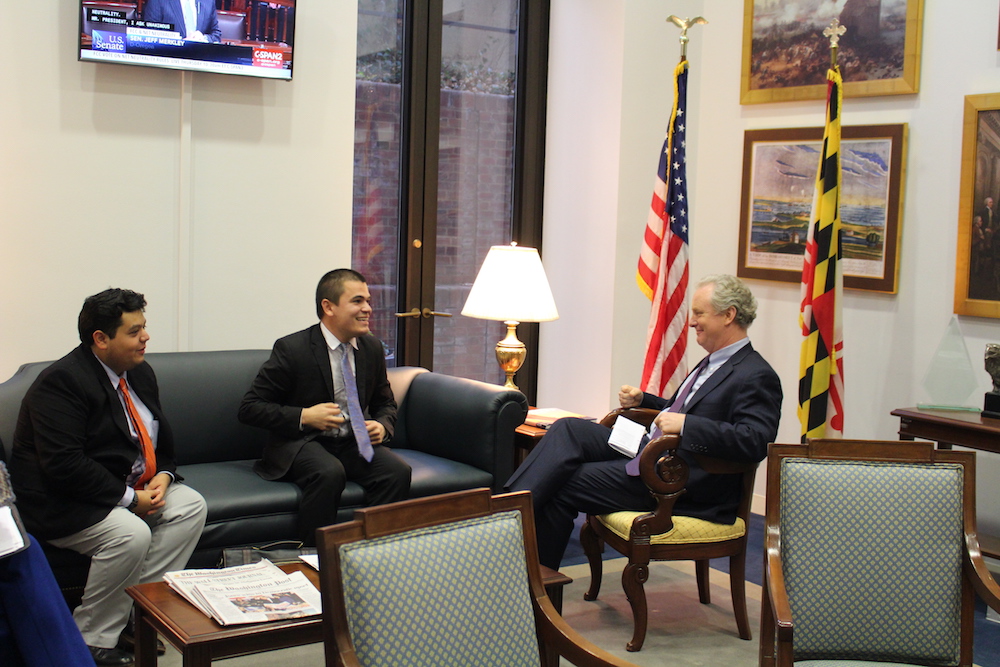 Carlos Mark Vera, center, and Pay Our Interns chief of staff Guillermo Creamer, left, meet with Senator Chris Van Hollen, a member of the Senate Appropriations Committee who was pivotal in building bipartisan support for the fund. (Photo courtesy of Carlos Mark Vera/Pay Our Interns)

The days of unpaid internships are over — at least in the U.S. Senate.

Thanks to a historic vote by the Senate Appropriations Committee Thursday, all senators will receive funding to compensate their interns in the 2019 budget year. Currently, less than half of Senate offices — 26 Republicans and 21 Democrats — pay their interns in some form, according to Roll Call.

The $5 million fund is the result of over a year’s worth of advocacy by Pay Our Interns, a bipartisan group with the mission of ending unpaid internships in Congress and other industries.

Carlos Mark Vera, 24, who founded the organization in 2016, said he was “shocked” by the Senate’s decision to fund internships, especially as many federal agencies face deep budget cuts.

“Even with the Republican majority, we got $5 million,” Vera said. “This has never happened in the history of the Senate.”

While interns in the House of Representatives were once paid through the LBJ Congressional Intern Program, this is the first time the Senate has set aside funding to pay interns.

Vera, a former unpaid intern in the House of Representatives and the White House, understands the struggles that come with working for free in the nation’s capital. A summer internship in Washington D.C. can easily cost upwards of $6,000, a price tag that many college students cannot afford to pay.

“This new funding sends a strong message that the Senate is ready to invest in our country’s youth,” Vera said. “Additionally, thanks to this fund, the child of a coal miner, of a janitor or a factory worker will now be able to come to D.C., intern, get paid for it and eventually become staffers.”

The hefty cost of interning in Washington has led to controversy over the lack of diversity among interns in the capital. When House Speaker Paul Ryan posted a selfie with an almost entirely white group of U.S. House interns in 2016, the internet responded with the hashtag #InternsSoWhite.

Many college students, especially those interested in politics and activism, have come to expect that they will not be paid for their work as interns. Annie Roebuck, a senior at American University who interned for Pennsylvania Senator Bob Casey in 2017, said she accepted the unpaid status quo when she decided to work on Capitol Hill. Casey’s office offers some paid positions but does not pay most of its interns.

“No one likes working for free but I understand that there are a lot of interns on the Hill,” Roebuck said. “It seems like every college student in D.C. does it, so it wasn’t surprising that I wasn’t paid.”

Vera has been working to change this mindset on Capitol Hill and within other industries, particularly nonprofits. He said part of the problem is that students continue to apply for unpaid positions and do not ask employers about payment. Some employers will pay interns but do not offer the option upfront, he said.

“You have the upper hand, you don’t have to accept this,” Vera says he tells interns. “We can ask for more. We can demand to get paid.”

Vera’s ideas have quickly caught the attention of some of the country’s most powerful political figures. Last year, his group convinced the Democratic National Committee to pay its interns, arguing that it would diversify the applicant pool.

Now that the Senate has made the same move, Vera thinks others will follow.

“By the Senate passing this, it sends a strong message to nonprofits, organizations, and agencies that not paying your interns is probably going to be something that is going to end very soon,” Vera said. “With this vote, we’re laying the seeds for the national internship movement in the United States.”

The Senate’s intern stipends would allow students like Roebuck to intern full-time or stay in D.C. over the summer. Roebuck said she ruled out applying for a summer Congressional internship because she “would have been losing a lot of money every day.”

Roebuck hopes the stipend is enough to afford the high cost of living in Washington D.C. and not just cover transportation costs to and from the Capitol.

“The living cost here is so high that it’s difficult for me to actually see a real expansion in the economic diversity of interns overall,” Roebuck said. “It might give more opportunities to people like me who are already in this D.C. circle, but I’m not sure it will really bring in outsiders.”