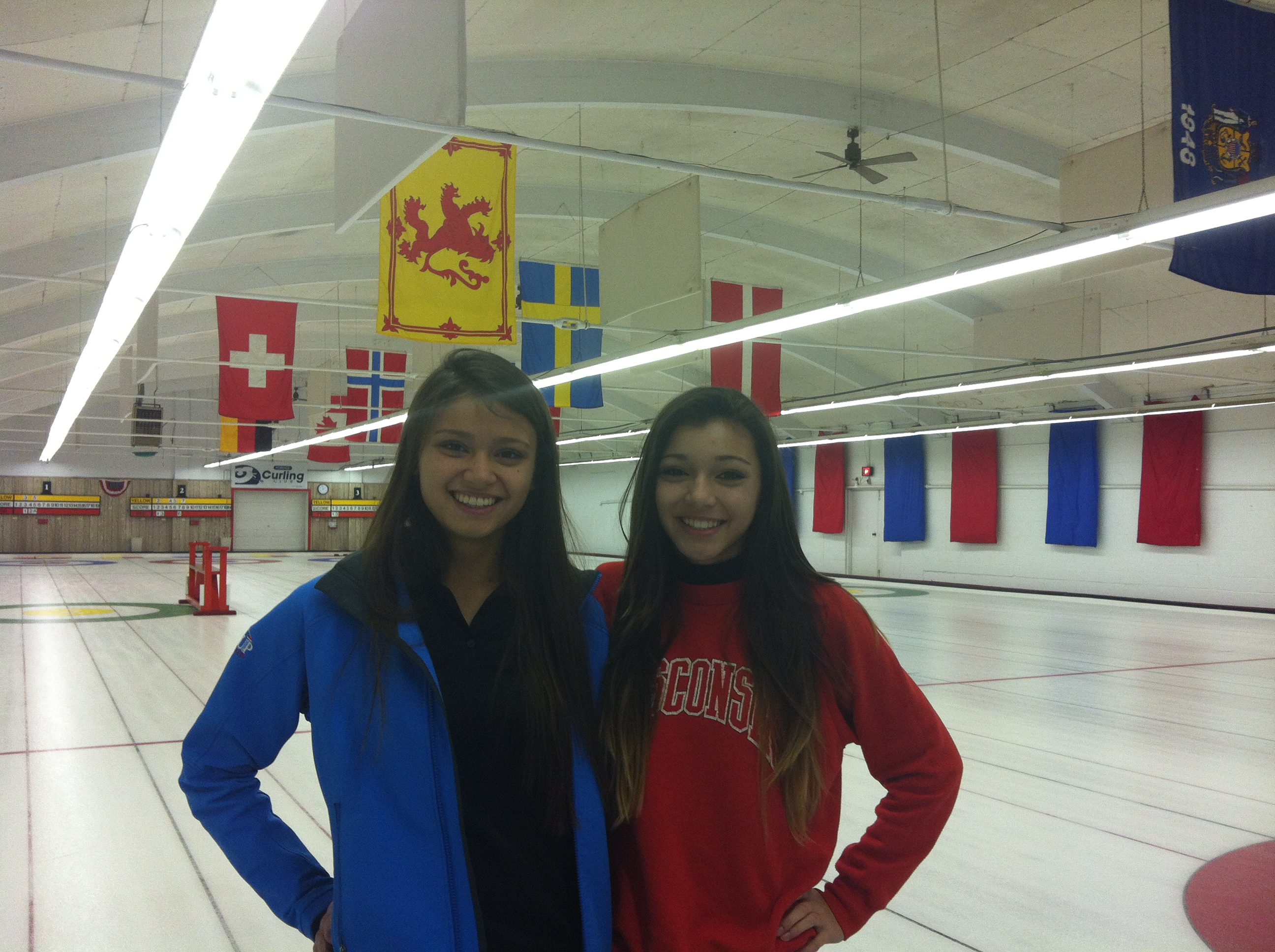 Lani (left) and Anne (right) Dubberstein on the ice at their home-sheet in Portage, WI. Lani’s team recently won the silver medal at the Junior Nationals. Photo Credit: Ike Sriskandarajah

One of the more obscure sports at the Winter Olympics in Sochi, Russia is curling.  That’s the one with the rock and the brooms, sometimes referred to as shuffleboard on ice– and like shuffleboard, its competitors tend to skew older.  But there’s been an effort by curlers to bring more youth into the game. In California, the Bay Area Curling Club invited local high school students to learn how to curl.

Curling is one of the slowest and safest of the Olympic sports. You can do it until you’re 80. In fact, the oldest American  ever to participate in the winter Olympics was a curler. So I was surprised to meet a world famous curler who was recruiting teenagers.

Canadian Olympian, Carolyn Darbyshire, is known in the world of curling as “the Manitoba Tuck.” She was on the Canadian Women’s team that placed second at the Vancouver Olympics. Today, she’s an ambassador for the sport and came to the San Francisco Bay Area to teach young people how to curl. In high school classrooms, she spread the word about the sport and encouraged the next generation of curlers to take center stage.

“It’s time for us to step down and let the younger generation come out and show their true colors,” she said.

Darbyshire could curl for decades more– as long as she can slide a heavy rock down a sheet of ice, while her friends scrub in front of it to make the ice nice and slippery. But she does recognize the sport can benefit from a certain youthful energy.

I met Darbyshire at the Oakland Ice Center in the San Francisco Bay Area. She had brought her medal with her and to be honest, it had seen better days. “People put it on, wear it, kids have dropped it on the floor and it’s just like, ‘Okay whatever,’” she said.

Darbyshire travels with her medal all over North America preaching the gospel of curling. One place that hears the message loud and clear is the Portage Curling Club in rural Wisconsin. Written on the side of the building is the claim “Home of Olympic Dreams.”  One of those hopefuls is 17-year-old Lani Dubberstein, who was excited to learn that there was an Olympian from her hometown. “We all heard that there’s an Olympian from Portage — like what?! That’s crazy! It got a lot of people into it,” she said.

Wisconsin has the most curlers in the nation, but it still has a ways to go to win respect.

“Yeah, that’s like a thing in high school where people are like, ‘Curling isn’t a sport, you don’t sweat, you don’t run.’ But, you kind of do run. It’s a 100 meter sheet and people throw it down in like 6 seconds,” argues Dubberstein.

She is a nationally ranked curler who got the whole family into curling, including her younger sister, Anne.

Anne has noticed the sport sweeping into new corners of America.

“New clubs are popping up all over the place. Like one popped up in Hawaii. You wouldn’t think that they’d build an arena there…and it’s really cool to see.”

It’s true. According to the United States Curling Association,  the number of registered curlers has increased by over 60% since 2002, and over half of their clubs have programs designed for junior curlers.

While I was reporting this story, a curling club popped up at my very own high school in Berkeley, California. The club President, 16 year-old Breonna Johnson, is looking for other kids to step onto the ice. “Yeah, I hope we make a team, because it’d be more fun if we had more people to just go to the ice rinks and just have games all day. That would be really fun,” she said.

So for you passionate young curlers, slide your stones and push your brooms because who knows if it will be one of you to be the first to bring home the gold for team USA. Maybe we’ll see you at the next winter Olympics in Pyeongchang, South Korea.