Donate Now
Cal Poly's 1st Multicultural Fashion show (not the ISA) I organized on Jan. 21st 2017 in Chumash Auditorium. The photographer is a good friend of ​Violet's: Carla Pangan
08.25.17 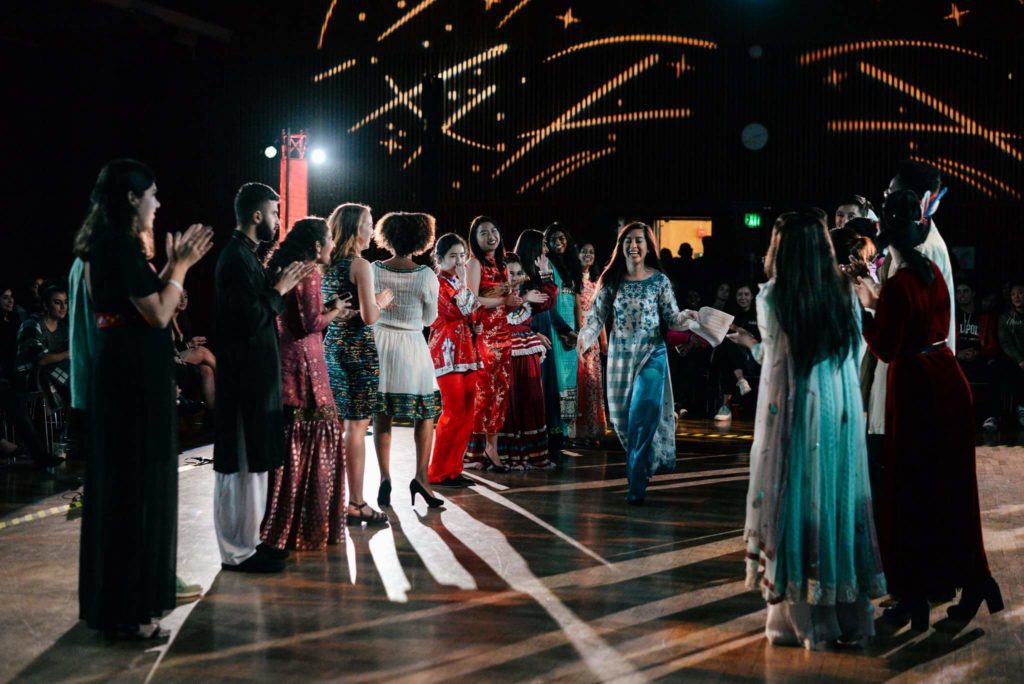 Upon arriving at Cal Poly, the first thing I thought was, “Jesus Christ, I have never seen so many blonde-haired, blue-eyed people all in one place in my life.”

Coming from the ethnically diverse Bay Area, I brushed off this thought the first few days of college—that is, until I realized I was more often than not, the only person of color in my classes, dorms, and friend groups.

I noticed hostility when I expressed my culture, such as enjoying pearl milk tea and cooking ethnic foods. I brought a rice cooker into my dorm, which probably wasn’t allowed. And I spoke to my mom on the phone in a different language, which made some people uncomfortable (complete with reactions that looked like I had offended their ancestors).

Some people asked me why I argue with my parents on the phone so much or why my language sounded like “chicken scratch”.

I soon began to realize that the less assimilated I was, the more alienated I became at Cal Poly. I remember people constantly asking me “what are you?,” “do you speak Asian-ese?” (whatever language that is) and commenting  “you’re pretty for an Asian girl”.

So, I changed the way I talked because apparently not speaking like a valley girl or with elitist undertones, meant I was too low class for the students’ refined taste. To prevent scaring off possibly my only potential friends, I started talking calmly and thought carefully before I spoke. Something I learned was to practice ‘code switching’, where you monitor the way you speak depending on the demographic.

I was only accepted when I fit my peers’ stereotypes. For instance, I was only proud to be Asian if they wanted to go to Panda Express with me. I tried to find my community at Cal Poly, but fitting in was already so difficult. So, I tried to join cultural organizations, but found my feet nailed to the ground and my body frozen as I approached the intimidating crowds at first meetings.

Even in ethnic communities, I felt like a minority. As a survival instinct, I suppressed my authentic self, abandoned my culture, and assimilated as much as I could (which can be explained as “internalized racial oppression”).

I bought a pair of Birkenstocks, changed my attire and showed disgust for all things Asian in conversations, except the mainstream food that the white people praised me for. I conformed to white culture for the first two and half years of my college experience, hoping to be accepted until I started branching out on campus. Fortunately, things changed when I seized the opportunity of an open call to be a part of the Indian Student Association (ISA) fashion show on campus as a model. This opportunity allowed me to explore racial identity. There, I watched beautiful and proud individuals who expressed pride in their culture, identity, and selves. Their welcoming atmosphere sparked my initial quest to find pride and appreciation in myself as well as my culture and identity. Despite my different racial identity, this made me feel accepted as a minority for the first time at Cal Poly.

Since the fashion show, I started to explore my own ethnic history and racial identity more. I started enrolling in ethnic studies courses and became empowered by knowledge and social activism wherever I could find it.

However, I knew that I came a long way to acknowledge and address my racial development and that I couldn’t be the only one who felt that way. When my younger brother disclosed to me that he wanted to attend Cal Poly, I knew I couldn’t just leave this toxic university the way it was and forget about it.

So I sought out how to create change on campus by immersing myself in distinct communities, educating myself about social issues. Driven to unite Asian American Pacific Islander (AAPI) communities on campus, build solidarity and retention among all marginalized groups on campus, I interviewed to work at the MultiCultural Center and received a position as a student assistant.

Through the MultiCultural Center, I was able to focus my ambitions and passion with the support and resources of amazing individuals and groups. By helping others grow, I was able to grow and personally develop more than I could have imagined. Senior year me is completely different from freshman semester me: now, I am not ashamed of my identity.

Now, I am loud, confident, and unapologetic of all my identities, but I am especially proud of my racial and ethnic identity that I suppressed for so long. I hope I can continue to be a voice for marginalized groups, guide, and inspire individuals who resonate with me, who find themselves lost, and/or who want to help others.