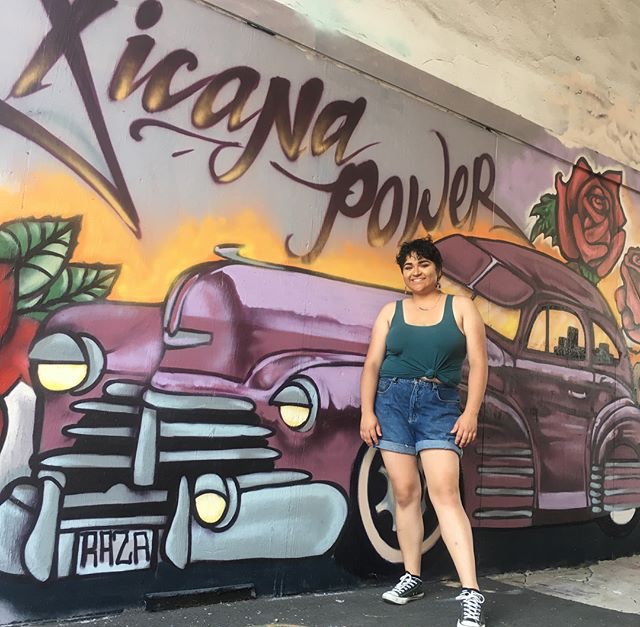 Reyna Jauregui was a quiet student when she came to Fremont High School in Oakland, California. It was the school that friends warned her she should stay away from, but she went to Fremont High anyway. There, she found her voice as a student activist and helped lead a multi-school walkout.

“It’s nice to see that you’re not the only crazy high schooler that wants to make a revolution,” says Jauregui.

The transcript below has been edited for length and clarity.

AMELIA MENDOZA: At the start of last year, I met a wonderful person named Reyna at Fremont High School. Born in Berkeley and raised in East Oakland, Reyna used to be a shy quiet teenager. During that year, I noticed that she started to ask questions about political issues like, “Who came up with the idea of segregation based on race?”

Recently, I walked through the school with her and she was already in full-on activist mode.  “We have a broken locker right here,” she showed me,  “and for the most part, we don’t even use these lockers. The doors are really dirty because budget cuts — you know we don’t have that many janitors. They don’t even let us use the bathroom after school.”

I got the opportunity to hear her story of how she became an activist. Here’s what she said:

So my freshman year, I was pretty quiet as a person. I came to school not knowing anybody because everyone else from my old school left to go to different places. I was the only one who decided to stay here close by. And people put a lot of fear in me. They’re like, “You’re going to be a dropout, you’re going to get shot — they told me a lot of things about Fremont. I was just like, I’m still going to do it. But I was really shy, I didn’t talk to people.

I guess the person that has a lot of influence on the person I’ve become is my best friend. She is super woke. It’s nice to see that you’re not the only crazy high schooler that wants to make a revolution.

I feel like one of the biggest challenges being a student activist is that most people don’t understand you. They think that you take things too seriously, that you need to chill, that you just have to live life cause you’re a teenager. But at the same time, these problems are affecting us. A lot of students get annoyed that this is what I think about the daily. They wanted to talk about irrelevant things, and I wanted to talk about, “Did you see the news?” I think that was the biggest challenge for me.

But the students here do care. When I talk to them one on one, it’s like, wait these kids are woke. These kids do know the problems, they just have a harder time showing it.

So there is this law [we heard about] that if a student doesn’t have papers, a teacher might have to report it — basically targeting immigrants. We were like enough is enough, and we need to put a stop to this. So we made May Day, International Workers Day, into this event.

The May Day march I started it all the way from Madison [street] to Fremont. And when we came to Fremont we had around like like, 300 or 400 students screaming and shouting, like in a respectful way. That was honestly one of the most beautiful sights that I’ve ever seen. So many different groups walked out. With other protests, a lot of people think, “Oh this is just some Mexican thing,” when it’s not a Mexican thing it’s an everybody thing. Deportation happens to everyone. So the thing about May Day was seeing so many people walk out — like we saw the basketball players the football players, we saw every type of person out here chanting with us. It was really touching for me because I’ve tried for the longest time to see all these different people unite, and it finally happened for May Day.

My big goal is that hopefully one day there’s a full revolution, because honestly, we need it. With so many problems, the only way that we can fix it is like doing a whole new thing. Yes, the protest scene is bringing awareness to many topics, but a full-on revolution will help us get rid of problems because we’re the ones taking control of how we want this society to be.

This piece was produced in an audio storytelling class organized by KALW Public Radio, at the East Oakland Youth Development Center. Listen to the stories by other students from the class at KALW.org: East Oakland Youth Share Stories of Resistance and Resilience.