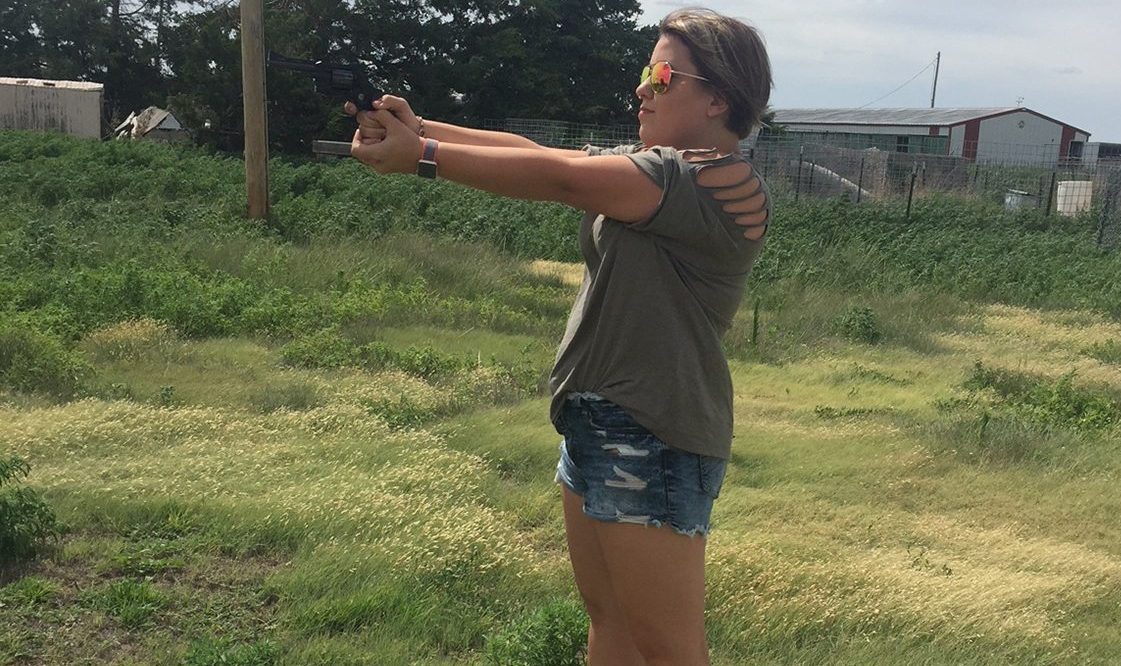 Alexis Buxton, 17, was in first grade when she shot a gun for the first time. She was at her grandpa’s farm in Scott City, Kansas, a rural town of 3,800 people, where she grew up. It’s the kind of place where everyone knows everyone — and it can seem like everyone has a gun.

“My mom has a concealed carry gun, my dad has a gun, my sister and her husband are both avid hunters,” Alexis said.

Even as a little kid, guns were everyday objects to Alexis. Her dad kept his collection in a locked gun safe in her playroom, though she did not have access to them. Starting when she was 4, he started talking to her about the guns — emphasizing that they were not toys.

“I’ve grown to have a really good respect of guns just because I’ve seen the damage they can do to animals,” Alexis said. “And I know it’s the same for humans.”

The damage guns can do to humans — and how to prevent it — has been on a lot of people’s minds this year.  After the Valentine’s Day shooting at Marjory Stoneman Douglas High School in Parkland, Florida, in which 17 people were killed, teen survivors of the massacre called for an end to gun violence with the hashtag #NeverAgain. For those advocates, preventing school shootings means calling for tighter gun regulations.

Alexis can relate to the fear of school shootings, but not the call for more gun regulations. Like many kids who grew up in areas of the U.S. where learning to shoot is a coming-of-age ritual akin to riding a bike, she sees the idea that schools should be gun-free zones as out of touch with reality.

So while it might seem like Generation Z stands united in their call for gun control, teens in pro-gun areas have an alternative solution: more gun training.

Gun training in schools: a relic of the past or a solution for the future?

In a 2006 promotional video from the Kansas Department of Wildlife, Parks, and Tourism, two gangly boys stand in front of cherry-red cinder block walls at Tonganoxie Junior High School. In between them, a gray-haired man with glasses dressed in head-to-toe khaki checks the boys’ stances before motioning for them to pick up a rifle from a table in front of them. The boys hold the rifles up, squinting down the sights, as the man checks their positioning.

It may seem like a scene out of a teen wilderness survival course, but it’s actually part of a program called “Hunter Education In Our Schools.” The federally funded program is implemented at the state level and teaches kids as young as 12 basic gun safety and shooting techniques on school time.

Hunter education in Kansas became a formal program around 2004 and is currently offered by around 60 schools throughout the state. At some schools, it’s offered via the health program. Others give participants physical education credit.

“My family’s always hunted, and we have a bunch of land,” says a doe-eyed middle schooler featured in the promotional video. “I’ve been wanting to do it since I was little, and my grandpa did it, my dad did it, my brother has, so I guess I have to now. And also I kinda want to.”

Gun trainings in schools aren’t exactly new. In fact, they used to be fairly commonplace. According to reporting by The National Review, in 1975, New York state had over 80 school districts with rifle teams. But over time, on-campus gun club membership declined. Then, in 1999, came the Columbine High School shooting. At the time, the conversation around preventing future student shooting massacres revolved around video games, bullying, and preparation.

According to reporting by Vox, since the Columbine shooting, 32 states have passed laws that make it mandatory for schools to conduct lockdown drills in case of a dangerous intruder. Many schools passed zero-tolerance policies, declaring their campuses gun-free zones. But in places like Scott City, the lockdowns and active shooter drills haven’t put a dent in the local gun culture. If anything, it’s created a sense of urgency to train young people on guns more formally — in or out of schools.

About a 10-hour drive away from Scott City, Dan Block is a naturalist for Worth County, Iowa. During the summers, he teaches middle and high schoolers how to shoot as part of a unit on wildlife conservation. In his beginners’ course, students learn about the components of a gun by shooting clay pigeons, identifying the contents of a rifle cartridge, and using a muzzle-loading rifle.

Most states have some kind of hunter education requirement for teens to obtain a hunting license, but it is unclear how many offer it during school hours or for academic credit. Florida, for instance, allows students in public schools to take an online hunter education course and receive P.E. credit at the same time. In South Carolina, parents at one school complained that by offering hunter education in schools, it was “spending tax dollars on classes that show students how to kill animals.” But in general the argument for hunter education in schools goes something like this: in communities where handling and shooting firearms is the norm, you might as well teach kids to use them safely.

Although in Block’s classes this summer, students are learning more than safety tips. In his advanced class, teens shoot .22 rifles and fire AR-15s — “So they get a good background on marksmanship training,” he said.

Block’s been teaching kids how to shoot for more than three decades. When asked if recent school shootings have made him rethink his approach, or whether the threat of school shootings ever enter the conversation, he said it’s never really come up.

“One of the first things I ask [the kids] is, ‘How many of you have a gun in your house?’ And more than half the kids raise their hands,” Block said. “They’re a familiar object for us, and I don’t think there is a terrible amount of concern in the public in North Iowa at least, that this is something that’s going to bother us or affect us.”

There is very little research on the effectiveness of gun safety trainings like hunter education for preventing personal injury or acts of violence against others. Being familiar with guns certainly didn’t prevent Adam Lanza from shooting and killing 20 children and six adults at Sandy Hook Elementary School. Lanza’s mother reportedly received an NRA basic pistol training course certificate, and the pair frequently went to shooting ranges for fun.

For her hunter education class in her Scott City high school, Alexis remembers filling out thick workbooks on different types of guns and how to use them. There was a hunting simulator to practice marksmanship and, of course, cautionary tales. She vividly remembers a story that the sheriff told her and her peers about getting shot in the leg when being careless with his gun.

“There’s a big conversation about [how] ‘guns don’t kill people, people kill people,’ and a lot of people – I would say me included – believe that,” Alexis said.

Scott City offers hunter education in schools, but it also takes school shooting threats very seriously. A few years ago, Scott Community High School, where Alexis attends, adopted a program called ALICE — Alert, Lockdown, Inform, Counter, and Evacuate — a national active shooter response training program that was developed post-Columbine. Once a year, students and faculty spend a day practicing and preparing a plan for if an active shooter were to enter the school. In fact, there is a full-on simulation of an “active shooter” with a Nerf gun. Students are shown how to grab the barrel of the gun so they can avert the shots, how to tackle the shooter, and how to throw objects that would harm the shooter.

Alexis doesn’t see preparing for school shootings and being pro-gun as mutually exclusive.

“It’s not taken lightly when there is a big school shooting [like Parkland],” Alexis said. “But I think a lot of people think gun safety classes are more important [than drills].”

She added, “We should get kids out shooting and out respecting guns before something like that happens in our own community.”