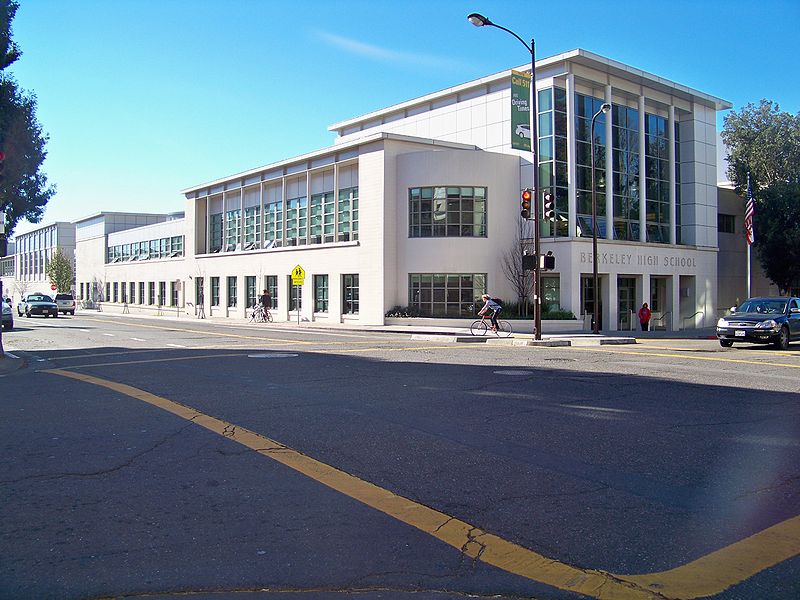 Youth Radio’s Natalie Bettendorf is an editor with the Berkeley High Jacket. On Thursday, November 5th, hundreds of high school students at Berkeley High walked out of their classes in response to a lynching threat found on a school computer. Bettendorf spoke with KPFA’s Dennis Bernstein about the incident.

Below is a transcript of that conversation

DENNIS: Natalie, You were at the protest today. Would you describe the scene? Were there a lot of kids there? What was the mood?

NATALIE: I showed up to first period. I had just heard of the incident fully earlier that morning so it was very chaotic. In the middle of first period there was an announcement over the loudspeaker. Classes all over the school were talking about it. All of a sudden these girls ran out of my classroom and everybody was very confused about what was going on. After going outside with my whole class class, it became apparent that the Black Student Union had instantly spread out this message of getting the the whole school out into the quad in solidarity to discuss the incident and to discuss the event and have a school-wide event, no classes. So it was very chaotic but very empowering. And I immediately got  the sense of, wow, what these students can do versus letting the administration handle it was incredible.

DENNIS: So this was really a spontaneous action. Tell us the best you can, tell us about the incident. Where was it discovered? What do we know exactly about what happened? 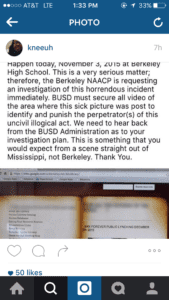 NATALIE: So I think, there was definitely a lot of confusion. There was a school-wide email sent out I believe last night, also this morning, but last night I first heard about it at ten or 11 p.m. which was pretty ridiculous considering it had occurred at lunchtime yesterday. It had been just an on-screen hack, it was not the whole school website. It was actually, if you just went on to that one computer and the school’s webpage you would see it. But if you logged onto the website you wouldn’t see it on another computer. It was a parent volunteer who had spotted it first, and she must have showed one of the librarians. But it actually didn’t get out to the students until much later. I saw it posted on social media, screenshots circling on Instagram, on Snapchat. So it was spread very quickly once students got a hold of it. But there was a lot of confusion as to why it wasn’t spread instantaneously heard about by the students.

I think that they were very hateful comments. And when I saw them, my stomach just dropped. And what was going through my head was, I can’t think of any appropriate response to this, anything the administration can do that’s going to make Berkeley High Students, who are very outspoken in media — we are very vocal on social media and in-person — I just couldn’t think of anything that would make people satisfied over the response. But I never expected this walk out and this event to happen today. And I honestly think that was an appropriate response and people were very satisfied with how students reacted.

DENNIS: How did you feel being out there with so many students? I understand that it was militant but peaceful.

NATALIE: Definitely. I think that’s a really good way to describe it. I was telling my friends I could not believe how actually organized this event was. And I fully respect the Black Student Union for, basically, they made all these signs, they put together these amazing opening words. Their whole idea of getting the whole school together would have seemed so ambitious to one person, but once I walked in on that quad and saw the entire school gathered together,  listening, chanting black lives matter up at the front of the quad on the senior steps, and to see all the students lined up and getting their voices heard and crying, it was so powerful. It moved me so emotionally, I couldn’t even imagine what they were feeling, but I also could because they made everyone so unified and I think just the organization of it is what just made it so effective for everyone.

DENNIS: This idea of a public lynching, that must have been really provocative and really bothered many of the students. Have you ever heard this kind of language before in the halls before, from people maybe not as bold as putting it on a computer?

NATALIE: I think what shocked us is that this isn’t something we are used to, at least me and my peers are not used to hearing that kind of language at school on a daily basis.

DENNIS: They referenced a lynching, they talked about the KKK….

NATALIE:  I feel like there is, use of the n-word at school, but I’ve never heard it in a real derogatory sense of wanting black people to be killed. So this really caught me off-guard. This isn’t like Berkeley High, this isn’t something I’m used to. That’s my reaction to it. But hearing black students talk today, saying that this makes them not feel safe at school — and this is considering what happened last year around the same time when a noose was hung in a tree on the Berkeley High Campus. I think this just pushed it over the edge and students said how can we tolerate this any more with these events that are targeting African-Americans, and why is this still happening? So I think that what people were really taking out of this one is that, we’ve come a long way since teach-ins happened after the noose, but reactions were so delayed. And so I think that as a community it seemed at the surface everything is okay but there’s this passive racism at the school where people just took it to the surface level.

DENNIS: So more to come, more consciousness-raising to do. We appreciate you joining us joining us Natalie Bettendorf, 11th grade, Youth Radio reporter, editor at the Berkeley High Jacket, Thanks for being with us.