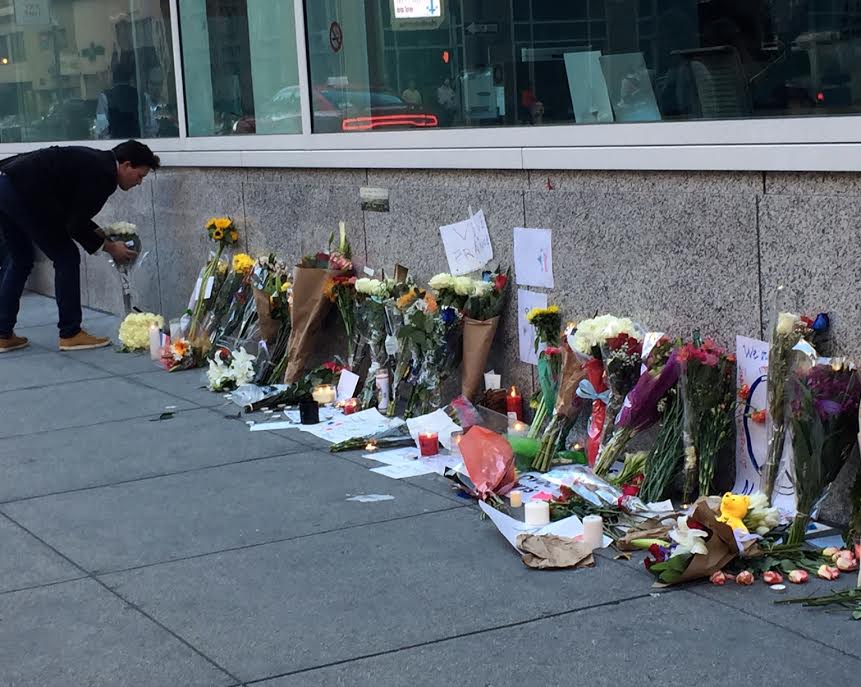 A man leaves flowers at the San Francisco French Consulate this weekend. Our thoughts are with #Paris.

“It’s happening again, the attacks on Paris”. Suddenly the Whatsapp thread with my French boyfriend lurched from flirty banter to stunned disbelief and cold hard shock.

I clicked and refreshed news pages incessantly, leaving the video loop on CNN blaring over the end of my workday. I had followed the Charlie Hebdo story in a similar manner when I lived in Provence last year. This moment felt way more urgent though: the masses were caught in the crossfire. I’ve spent 12 months of my life in France, so I felt the wrenching need to account for everyone I knew in Paris and beyond immediately. Here’s what some of them had to say.

When 9/11 happened, the Internet was not developed like it is today. Social media has such a presence now. On January 7th we saw #JeSuisCharlie. This time people are used to responding online. It’s almost routine – they are adding a tricolor filter to their profile pictures and tagging everything #PrayforParis.

I take issue with this hashtag, #PrayforParis, that Justin Bieber and other celebrities have popularized. We don’t want to identify with a religious word, regardless of the affiliated faith. If you go back to the French Revolution, we burned hundreds of churches and their registers because people were so pissed off by the clergy. My friends and I, we are more about love and solidarity than about praying.

Similar to 9/11, people are heavily emotional. Politicians are using that to their advantage– and we will be electing regional officials this December. They will be in office for 6 years. These results will set the terrain for the Presidential election of 2017. It’s about the Right and the Left.

Note: A few hours later, Bastien informed me that his 32-year-old university professor had died in Paris.

At about 10:30pm, a friend discretely informed us partygoers to make sure none of our friends were near the République neighborhood. There had been a shooting. This news trickled through the bar quietly and the merriment continued. It seemed—while dreadful—a less alarming, less unusual occurrence in such an urban environment. About every twenty minutes thereafter we learned of a new attack. While the music continued to blast, the televisions in the bar flashed images of chaos where the bomb exploded near Stade de France, the shootings at the Bataclan and the restaurant.

Looking around the bar, the gravity of the situation augmented quickly. Almost every face was illuminated with correspondences flowing in and out of cellphones. Mothers and fathers called and were being called. Were our loved ones safe? How did our loved ones know if we were safe?

Snippets of doubt or confirmed news about friends and acquaintances, in danger crowded the bar. Someone waited to receive word from a friend stuck in the Bataclan. Another learned her friend was shot in the arm and thankfully not somewhere more fatal. Little by little, we learned the statuses of those elsewhere in the city. Many debated whether it was safer to stay or leave, where we were best off and if there was even a right answer to these questions. Should we keep the music playing or turn it off in favor of the news audio? Tears streamed down several faces.

I felt as secure as I could exactly where I was. Staying with friends, staying alert to the development of the situation, staying in touch with my friends and family in the US. This is unlike any other act of terrorism I have lived through. Reactions to this violence already felt vividly distinct from those around the time of the Charlie Hebdo attacks. It was infinitely more personal.

The Next Day and Thereafter

Across the city on November 14, 2015, an abnormal stillness on my buzzing street set the tone: calm and despondent, heavy and indignant. A friend in a closed down neighborhood closer to the sites of the attacks sent me a text, “I imagine it’s the quietest Saturday in the history of Paris.”

Parisians were directed to limit their outings as much as possible. On a main thoroughfare on the south side of the city, it appeared to be a normal Saturday. When my roommate and I went for a run, we dodged strolling shoppers, kids on scooters, and plenty of tourists. It felt almost normal until we quietly crisscrossed through a solemn-faced pack of about eight fully equipped gendarmes filing past us in the opposite direction. And we felt safe. It felt almost normal except for the hush of shared experience.

Throughout the rest of the day, we shared anecdotes of where we were, how we found out, what news reports conflicted or seemed more reliable, and most of all, how so many people were getting in touch with us to make sure we are safe.  We talked about fear. Many agreed this is not a time to submit to fear, that the best reaction to the attacks, along with grief for those who were killed and injured, is to continue living life.  I relate to the French artist Joann Sfar’s illustration of the city’s motto, “Fluctuat nec mergitur.” Paris is tossed by the waves but not sunk.

In Syria there are bombs falling from the skies…we don’t have that in France. People forgot but during World War II we had that in France, during the decolonization of Algeria and Morocco (former French territories) there were bombs in the markets and in the churches. In France we’ve forgotten a life of war and conflict – we’ve been very comfortable. We don’t have weapons like in America. It’s not legal to possess weapons, especially firearms.

When Charlie Hebdo happened it was a panic attack – I prepped a survival kit with food and medications. I felt threatened then, but now I think there is a chance that the world we know will fall apart and it’s going to be a mess.

So how to respond to this attack? Increased surveillance? After Charlie Hebdo, it suddenly became legal to monitor all conversations – personal, professional, anything going through a phone or computer. That didn’t prevent a bigger catastrophe so it’s useless. The state can access all my photos; whatever I do is recorded and can be used for whatever the state wants. That’s not liberty, that’s 1984 by George Orwell.

Raphael is a Parisian interning at San Francisco’s French Consulate.

I was at work, I had just come back from my lunch break. I had a look on Facebook and I saw that there was a shooting in Paris. A shooting, oh ok, that’s something that happens in the U.S. Then I heard that there had been multiple attacks, and explosions near the Stade de France: it was something much bigger.

My first reaction was to call my friends in Paris to ask “are you ok, are you ok?” Most of them were at home but some of them were in bars. Apparently the situation was just crazy, people were shouting in the street – pure panic from my understanding.

I love The Bay. I like life here, but I am very happy to go back to France. I will be happier to go back after what happened. If I could I would take a plane to Paris for the weekend, just to hug my loved ones. I’m impassioned to go back to France, even if it means leaving a beautiful place.

As the French start a new workweek, they will reenter communal space, engage in conversation and begin to process their nation’s latest tragedy. Will they do so with open and tolerant hearts? Socialist and Front National leaders alike are calling for tightened borders and beating the war drum. Such policies create a space of “us versus them” and bolster the notion of The Other – in this scenario anyone remotely resembling the creed or color of any of Friday’s numerous attackers. More ostracized individuals may very well flee to join violent extremist camps if they don’t find a sense of belonging in France.