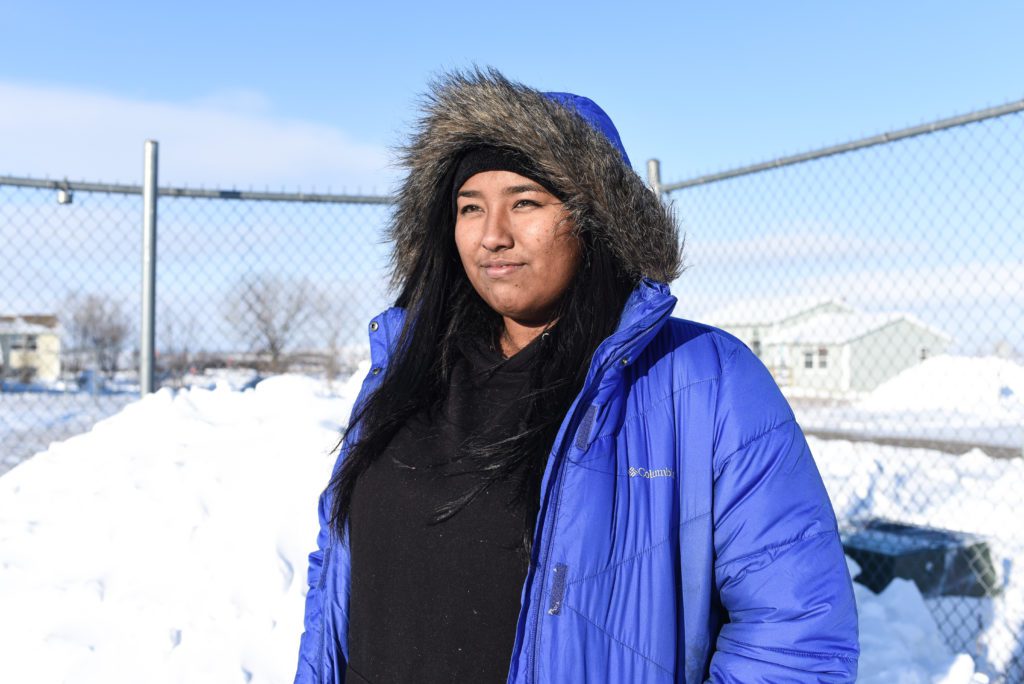 Khannie Saengphachanh, 18, an Ogogla Lakota from Ogogla, South Dakota is one of the Water Protectors at Standing Rock, ND. Photo: Avery White.

Photographer Avery White has been embedded with the Water Protectors of Standing Rock, documenting the efforts to block the Dakota Access pipeline. She shares with us this latest dispatch.

Weather conditions have become lethal with temperatures dropping well below freezing. I have been staying in the Cannonball Recreation Center for the past few days along with hundreds of others seeking shelter from a particularly difficult blizzard that passed through. Khannie Saengphachanh, an Ogogla Lakota from Ogogla, South Dakota, walked up to me one night and introduced herself. She had a big smile and immediately gave me a hug as she told me her name. For several days we chatted about what it’s like to be a young woman at Standing Rock. She just turned 18 and has come to stand with the Water Protectors alone. She is truly remarkable.

Avery White: Give us a little orientation on your time at Standing Rock. How long have you been here? What drew you to Standing Rock?

Khannie Saengphachanh: The way I got here was actually kinda funny because I was in South Dakota staying with my cousin Paris and I was about to sign up for college there and my grandma was like, “We’re thirty miles away from you, get your shit we’re going to Standing Rock.” I was just kinda like: “Okay, let’s go.”

I had no clue what was going on here until early August. I had no idea what was going on. So I immediately wanted to come. We first came into Sacred Stone, but it was getting kind of crowded so we moved to Oceti Sakowin and that was only when the first seven teepees were up and a few tents. (Editor’s note: Oceti Sakowin is now the main camp.)

Its crazy to look at it now and see what it’s come to and still growing. Twenty thousand? That’s crazy.

We were here for, I want to say almost a month and then had to go back to take care of some business, but like the whole time we were gone we just wanted to go back. It’s hard not being there and just seeing everything happen over Facebook and then not knowing what’s true and what’s not true. So we came back as soon as we could, and I loved it here so much. I applied for college here at Sitting Bull college, and now that’s where I’m going to be going in January.

AW: Can you tell us about having a father that works in the oil industry?

KS: My dad hated the fact that I was coming here. He was just so against it. “That pipeline’s gonna go through no matter what. There’s no stopping it, I don’t know what you’re doing. You’re just going to go get arrested for no reason, you don’t need to be out there.”

The only reason he was saying that is because he works in the oil field and he… I mean that’s what he does for a living. So of course he’s against it, which kinda sucks because I’m fighting for the opposite. He understands and he stopped hounding me for it.

We got in a pretty big argument about it. I went to his house right before I came back here and we were just yelling at each other. “Do you want clean water?” I kind of did it in front of everybody, so everybody was just quiet because they knew I was right. But they didn’t want to accept it, because I was the youngest one there. All his friends from work were there and I was like, “You guys are dumb. I’m not saying you’re dumb for working in the oil fields, but you’re dumb for not understanding my reasons for going.”

AW: Do you think your family is proud of you on a certain level too, though?

KS: Oh yeah. Like my mom…I know it scares her, me being out here. Me being at certain actions. I know it scares her, but she always reminds me of how proud she is that I’m here, and other family from South Dakota thank me all the time for being here even though I’m not really doing that much. They definitely share their love through Facebook and whatnot. They let me know that they still care and that they are proud of me, calling me brave. I’m like, “I’m barely doing anything.” I’m just here. But they still appreciate me just being here.

KS: Honestly, I was scared at first because I feel like I picked this college as a panic choice. “Ah! I’m running out of time!” So I just picked one really fast because we’re here anyways. But then I started thinking about it: this is good. I’ll be right here. The college is 15 miles from the camp, so I could always be around because I know this isn’t going to be a short-term thing. This is going to be a long battle, but we will win. I’m sure of it. I have faith in that.

It’s helping me decide what I want to do in college. Part of me wants to go into criminal justice and understand all the legal stuff because of what’s happening here, and all the nonsense that’s going on with the incorrect charges that they are putting on people. And then I see all the medics…I kind of want to go into nursing and do what they do when stuff like this happens. And be on a first response team because it’s pretty awesome to see what they do.

It’s definitely helped me look at things a lot differently and definitely made me appreciate …life before, and water. It makes you never want to waste any kind of water ever again.

It’s a bittersweet thing being here. It really sucks for the reason we’re all here, but it’s awesome to gain all the knowledge that you [get] from meeting everyone and hearing everyone’s stories and everyone’s backgrounds, everybody’s different understanding on things. It’s pretty awesome.

AW: What do you think is in store for Standing Rock this winter?

KS: It’s gonna be a cold, harsh winter but we’ve got some strong warriors out there. I can’t say I’m taking part in that, because I’ve definitely haven’t been staying out there this winter so far. It’s really cold, but they’re doing it. They’re not backing down and that’s awesome. They’re so strong for being out there — it’s below, below, freezing and they’re sticking it out in their teepees and their yurts. Some people are still in tents, some people are just in their cars. But they know why they’re here, so it doesn’t even matter to them.

AW: Is there anything you want the world to know about Standing Rock?

When shit hits the fan, we’ll have your back because you had ours. All of our allies — we appreciate anything that anybody has done for us. All the money and things that you’ve sent, it’s helped a lot. So thank you.

KS: Probably, like, love definitely conquers fear because the fact…knowing that all of us could get shot or tear gassed or maced at any moment. We don’t fear it. Because the love that we have for this water. So that’s it. Love conquers fear. Our love for what we’re fighting for defeats any kind of fear that we have. We’re not scared of getting shot, we’re not scared of getting tear gassed. As long as our water is clean and our grandkids and our grandkids’ grandkids get clean water then it doesn’t matter.

AW: What does it mean for the Native Americans?

KS: Hopefully that people know that we’re serious about what we mean. We don’t just protest things for fun. Like we’re serious about this stuff. Hopefully the world realizes that we have everybody’s back. We’re here for everyone. This water isn’t just for us, this is for everybody. This water supply is for what? 18 million people.* We’re here fighting for you guys, it’s not just for us. Half the people that come [here, the proposed pipeline] doesn’t even affect their water supply, but they understand that it’s wrong and they back us up.

I thought that was really awesome. There’s like 20,000 plus people here. That’s crazy.

(*Editor’s Note: This frequently cited figure comes from a 1982 study by the Upper Mississippi River Basin Committee. A more recent study puts the number of people who rely on the Mississippi river water supply, of which the Missouri river is a part, at 15 million. As the National Parks Service points out we don’t actually have good numbers on just how many people rely on the river for their daily water suply.)