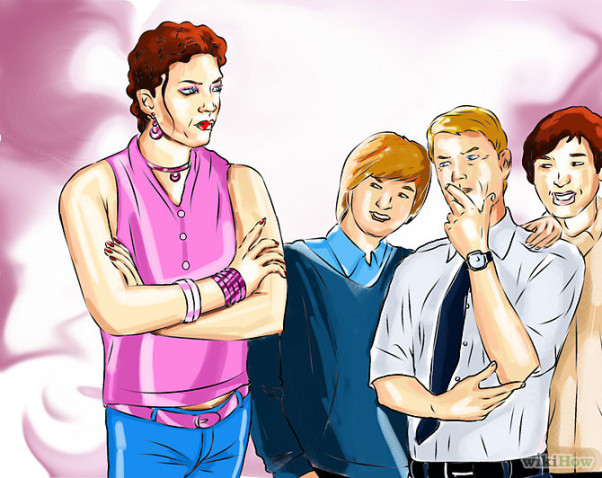 Ever since I was a child, I have struggled with my gender identification. I didn’t fit the societal norms of being a young man. I loved to dress in skirts and put on make-up. I can remember being six or seven and praying to my Goddess to make me a girl. I felt wrong in the skin I was in. I felt like I was in the wrong body.

Being trans is not a disease. Trans people are born in a body of opposite gender than the one they identify as. The body they’re born into doesn’t reflect the person inside.

I have the body of a man, but the persona, mind, and attitude of a woman. Like me, many other trans women don’t identify with their bodies and might dress like women in private in order to fulfill a need without being criticized by strangers. Many, like myself, may want to be called by a different name, or called by the opposite gender pronouns.

Life as a transgender teen in Merced can be difficult. When I’m out in public, I go by masculine pronouns and call myself by my birth name. I also wear clothes that I don’t identify with, but conform to what society says I should be. I do it because I value my safety and my life.

There is a certain danger around being trans that exists in even the safest of communities, a fear that people can turn on you for just being yourself. Once, when trying to come out, I wore make up to school. A group of students began to laugh. They called me “tranny” and “faggot.” I felt degraded.

This is why many trans folks, including myself, feel the need to hide our true identities when in public. Institutions like the US Census, schools and hospitals – which usually only have ‘male’ and ‘female’ options for gender – render trans people even more invisible and make it hard to collect accurate data.

UCLA’s Williams Institute, which conducts research on law and public policy around sexual orientation and gender identity, estimates there are 700,000 trans people in the United States, or about 0.3 percent of adults. Another study by The National Center for Transgender Equality and The National Gay and Lesbian Task Force found that a whopping 41 percent of trans individuals reported having attempted suicide.

Here are some quick tips to show support and be an ally to a transgender person. First off, do not call anyone “tranny” or use any other derogatory slang terms. Second, take the time to learn and call people by their preferred gender pronouns — that means you might have to ask what that is. Third, don’t make someone feel like the odd person out because they want to use a different name or a certain pronoun. Oblige them, it will cost you nothing but it will give that person an invaluable sense of ease. Lastly, don’t make fun of them for what they wear, or how they walk, or anything about how they present themselves.

Just like any other teen, I long to be part of something greater than myself, to be accepted. At this point in my life, acceptance is what I’m striving for most of all. This includes acceptance from the outside world, but also from within myself. To accept yourself, and have others encourage you to accept yourself, can be healing. The simple act of being called by my preferred name and pronoun can make a hard day so much better.

Joining We’Ced and being around Merced’s LGBT Center has helped me feel accepted. Here I am part of an effort to tell the stories of my community and raise awareness around the LGBT world. This feeling of acceptance, the feeling of being safe to tell those around you how and what you feel, is a relief for me that is hard to put into words. I came out to the people in We’Ced before I told my family. I did this because I felt safe. Here there are people who are gay, who are bisexual, and could understand where I was coming from.

My time at We’Ced and at the LGBT Center has brought my self-esteem to an all time high. It has allowed me to get certain secrets off my chest without ridicule. My hope for the future, not just for me, but for the entire LGBT community in Merced and elsewhere, is that we can live in a world where being trans is no more a thing to be ashamed of than being left-handed or having a certain color hair.