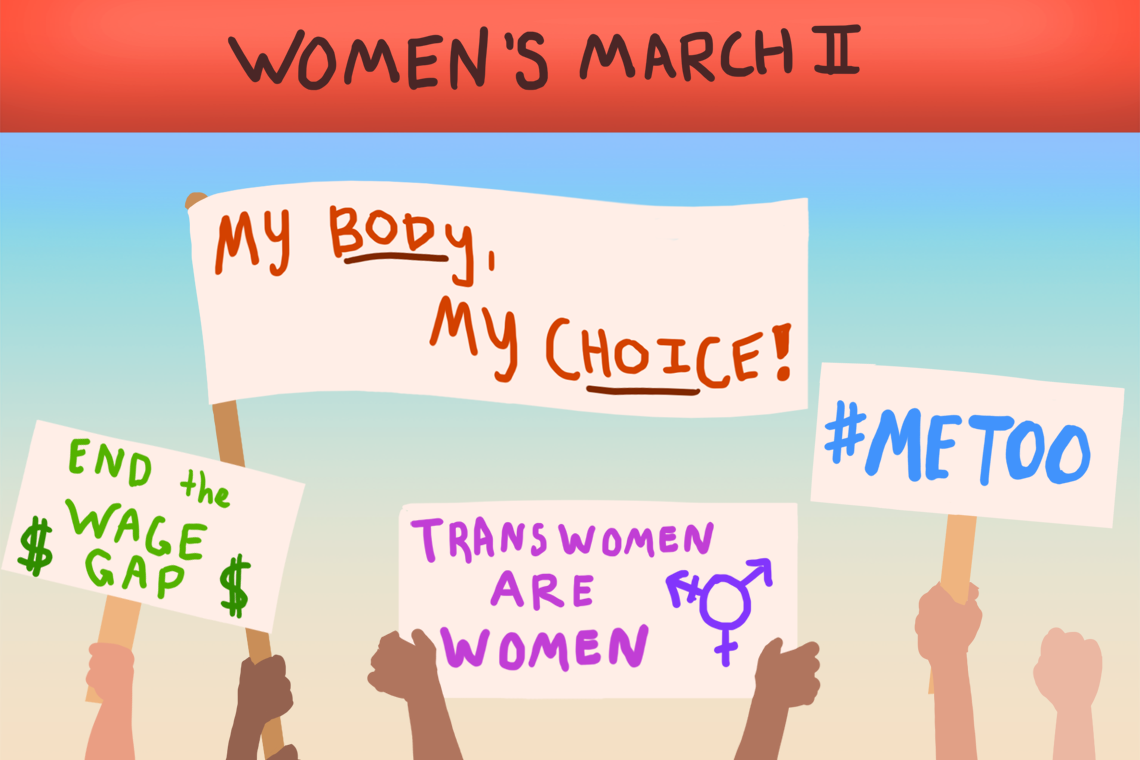 Today marks the one-year anniversary of the women’s march. And it’s been a busy year for women’s rights. From the sexual harassment hashtag #MeToo to a new sense of outrage over gender-based pay equality, it’s a time to reflect on what’s happened in 2017… and what still might happen in 2018. Now, as cities across the nation prepare for the 2018 Women’s March, we asked teens reflect on all that’s happened since women’s march 1.0.

Youth Radio teens Mali Dandridge, Thadius Prescott, and Finley Davis talk about whether or not they believe last year’s march was effective and what they think this year’s march will represent for 2018.

Mali Dandridge: During the months after the [first women’s] march, I kind of felt a bit of pride and a little bit more acceptance just because of how big of a deal it was. A lot of people from my school went, and my aunts and uncles went. It was just kind of a thing that everyone did and everyone kind of experienced.

But I think the whole #MeToo thing kind of tainted that [excitement] a little bit. I mean I think it’s good that all of the cases came out in the open and people are able to talk about [sexual harassment]. But after #MeToo, the illusion was kind of gone — like the illusion of gender equity and like we’re moving on. I dunno, I was kind of similar to how I felt after the election with Trump.

Finley Davis: The women’s movement showed me that people all can band together and that they can be united, and that mass protest all across the country is a very possible and realistic thing to achieve. I think that [was the feeling that] birthed the #MeToo movement.

MD: In terms of conversations that have been sparked just about women in general and women’s rights, just the fact that it doesn’t really make sense that women aren’t constantly banning together or on the same team, especially considering the fact that there’s so much pitted against us already.

FD: Seeing all the women [last year] was really great, but [it was also great] seeing people who are allied with women and the cause. My mom was out there, my grandma was out there, but so was my little brother. Seeing that made me feel really empowered and also secure in a way. It just made me feel like I had people I could fall back on like people who maybe weren’t directly affected with women’s issues still felt the need to fight with us.

MD: Last year, if there was to be sadness and anger, [it made sense the women’s march] was the place to do it, especially considering, you know, the rise of Trump and the loss of Hillary. I think this year’s march, it’ll probably be more frustration in the sense that people are probably like “Oh we have to do this again, I thought that maybe the first time we’d get our point across.” For me at least, women’s rights seemed like something that should just make sense. Why does it need to keep on being reinforced? And I think that a little bit of frustration might stem from that.

TP: I could see there being a lot of discouragement and frustration this time around. We’re tired of egging this on like a basic human-like privilege that should be like breathing. And I feel like it will be more of that than just straight emotional outrage like last year was.

FD: It’s hard to have a tone of hope when the previous March was at the beginning of a new presidency where we didn’t know what to expect. And now after we’ve seen repeated attempts to take away women’s rights, to do all these things that seem so illogical and so irrational, it’s just hard to have hope because we know what we’re in for, for the next couple of years. Maybe it will be a more realistic tone of, “We know we have to have this protest now” to show the administration that we’re still angry.