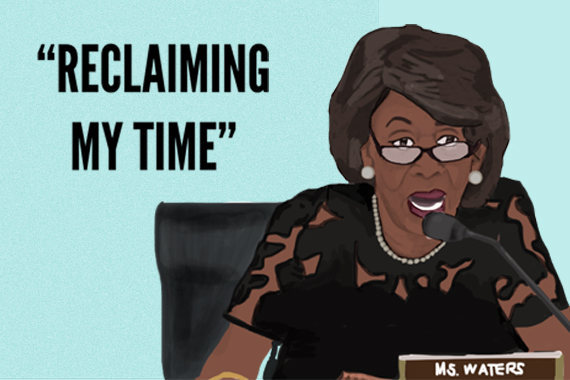 Representative Maxine Waters has ignited a flame in women to “reclaim our time.”

During Secretary of Treasury Steve Mnuchin’s testimony before the House Financial Services Committee, Representative Waters let the Secretary of Treasury have it for ignoring her question. It’s empowering, especially for young women to see a Black woman stand up for herself. No one should have their time wasted. Everyone deserves respect in their everyday lives, no matter who or where they are.

But it’s not just politicians who need to hear our queen Maxine’s message. It’s perfect for teens too. Thinking back on our lives, there are so many instances where we could have used a “reclaiming my time” mantra:

Group projects are a pain for many, but what makes these assignments worse is when your peers overlook your ideas and opinions. Imagine you’re stuck with group mates like this for an entire semester. Well, I don’t have to imagine it because I lived it. Our team (ironically called Team Harmony) consisted of two guys and two girls. The guys in the team often didn’t propose ideas during meetings. I planned around one or two assignments almost entirely alone even though we gathered up to plan them together. During meetings, my ideas went unheard, until it came out of the guys’ mouths. Then, it suddenly became the best idea anyone has ever heard. Group projects with the team took forever to finish because suggestions from me, a woman, were either picked apart or went ignored. So listen up, boys– I am talking here.

“What’s up, honey!” “Hey, Pretty Lady!” Oh my God, and sometimes it’s just a bunch of “HEY!” The list of catcalling tag lines is endless. When you’re in a rush to get somewhere, it doesn’t help to stop and respond to catcalls from strangers on the street. When I am walking around in public, I am trying to mind my own business. I have somewhere to be. And men yelling or running up to me, is a nuisance and a complete waste of my time. I am not flattered. It isn’t a compliment to make comments about what I’m wearing or my “exotic” appearance. They have simply wasted not only my time, but also my energy.

Debate club was one of my favorite activities in high school, and it’s something that made it actually bearable for me. My senior year, I became president alongside a guy in our club. We got along great in the beginning, but as the year progressed, I found myself constantly butting heads with him. He never liked any of my ideas, and would always try to act as if he was better than me, simply because I was a woman. I remember when we were both writing a bill to present to the organization, his was about making drip irrigation mandatory for California farms, while mine was about legalizing polygamy in America. He constantly put down my bill, calling it “silly” and “dumb”. This led to me to have doubts about whether I should turn it in. In the end, I got it in and mine was actually chosen over his. If he hadn’t wasted my time by constantly putting down my ideas, I could’ve turned it in sooner.

If I Were a Boy

Growing up, my parents were the overprotective types. I had to be at home, at school, and that was it. Even now that I’m in college, my parents still are concerned when I go out with my friends. They say the world isn’t safe for girls. What makes me really upset is that they tell me that if I were a boy, they’d let me do whatever I wanted. Although they are not wrong, the world can be dangerous for women. But the world can be dangerous for anyone. I don’t have to be a boy to do what I want. I am a responsible young woman who can take care of herself.

Maxine Waters will not allow herself to be ignored or talked over, and it’s time for all women to follow her lead, and to reclaim any time we may have lost due to lack of respect.