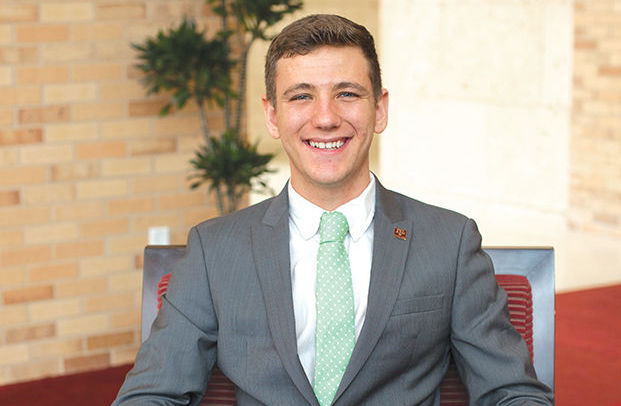 [Editor’s Note: College campus politics don’t usually make national headlines, so you can imagine the surprise that gripped Twitter when Rick Perry–current Secretary of Energy and former governor of Texas–weighed in on the recent election at Texas A&M University of an openly gay student body president. It’s a story that is still playing out in both social media and the pages of the New York Times, where the editor-in-chief of the school newspaper–The Battalion–penned an editorial. Below you’ll find a profile by Josh McCormack of the newly elected student body president originally published by The Battalion. For even more context, read Sam King’s NYTimes editorial.]

Economics junior Bobby Brooks will serve as the first openly gay student body president after the end of the latest Student Government Association elections, setting a hallmark for the university and its culture.

The official confirmation of Brooks’ victory came weeks after the polls closed due to the disqualification of candidate Robert McIntosh, who filed two different appeals attempting to overturn his disqualification.

“I would like it to echo the sentiment that I’ve always had, that I am just ready to get to work here, get things done,” Brooks said. “Someone had do it at some point. I think it’s less about me, Bobby, and more about a person that filled that role is now here and that is what’s really exciting for me.”

MSC President Brian O’Hara has worked with Brooks as the MSC Executive Vice President of Diversity over the last year to bring about changes like creating diversity dialogue for students to participate in.

While Brooks being elected is exciting, O’Hara said, this is just one step toward inclusion in the university.

“I think it’s easy for us to say that we have made progress,” O’Hara said. “We have as a university to a certain degree, but what’s more important is that our student leaders are continually more and more representative, and more and more true to they are as the student body. I think Bobby Brooks is an amazing Aggie, he loves Texas A&M and he happens to be gay.”

Current senior class president Claire Wimberly, who was also Brooks’ campaign manager, is looking forward to having Brooks in office and seeing what he will bring to the table.

“I hope to see him accomplish all that he set out to do during campaign. His goals — keeping student fees low, making student services meet real student needs, increasing feedback regarding academics and making our campus more inclusive — are all attainable,” Wimberly said. “I know he’s going to surround himself with an amazing team, and I am looking forward to the progress they are going to make on our campus.”

Bobby’s life and struggles with sexuality

“I was an Aggie from the first day that I was born, there was no choice about it,” Brooks said. “My sexuality was a non-issue in terms of selecting Texas A&M as a university because I knew what this university could offer.”

Despite the easy choice of attending Texas A&M, Brooks said his sexuality wasn’t something that came easy.

“My sexuality was something that I never wanted to particularly address growing up,” Brooks said. “I had a strong history of suppression with my own feelings toward that. I had known for a very long time, but I didn’t want to accept that and thought it would just get better.”

In high school, Brooks began his career in student leadership and ran for student body president. Through that role, he also took his first steps in acknowledging his sexuality.

“Toward my senior year of high school, I actually ran for a senior class president position at my high school, and [when] I got that, certain people started paying more attention to me,” Brooks said. “Through that, there was someone who I had always thought was attractive and whatnot, so [we started talking]. So through that person, through that experience, I was able to explore that side of me, my sexuality, a little bit.”

After he graduated high school, Brooks spent time studying abroad in Paris. During that period he felt comfortable expressing himself as a gay man without the pressures he felt in Texas. Coming back to the United States and entering his freshman year of college put a pause of his self expression.

“So when I got here to Aggieland, it started out with me kind of being afraid of [my sexuality] in general because I was back in this Texas kind of pressure, but there was something new to it in that I was now my own person, more than I was back in high school,” Brooks said.

When Brooks made his way to College Station, he became involved with the organization MSC Freshmen Leadership International and made a friend who was French and encouraged Brooks to be comfortable with his identity.

“I eventually felt comfortable enough opening up to her … So she and I went to get coffee and I set it up. I was like, ‘I have something big to tell you,’” Brooks said. “I was still so nervous. We chatted about it and then I told her in French… ‘Je suis gay.’”

The friendship allowed Brooks to grow into his sexuality in a healthy way, Brooks said. As time passed he became more and more comfortable with who he was, eventually telling his family the truth.

“I started opening up to more and more people, little bit by little bit. My family was very accepting,” Brooks said.

These experiences led to him to pursue leadership roles at A&M.

“If I sell my identity short, I’m selling the identities short of every single person on this campus who doesn’t have the opportunity to run for student body president,” Brooks said. “How am I supposed to tell someone’s little sibling who wants to come to Texas A&M that ‘It’s going to be fine, we’re working on a better Texas A&M,’ when I actively repress my identity for X amount of time just to get something?”

To read the rest of this article, check out the full piece on the The Battalion’s website.