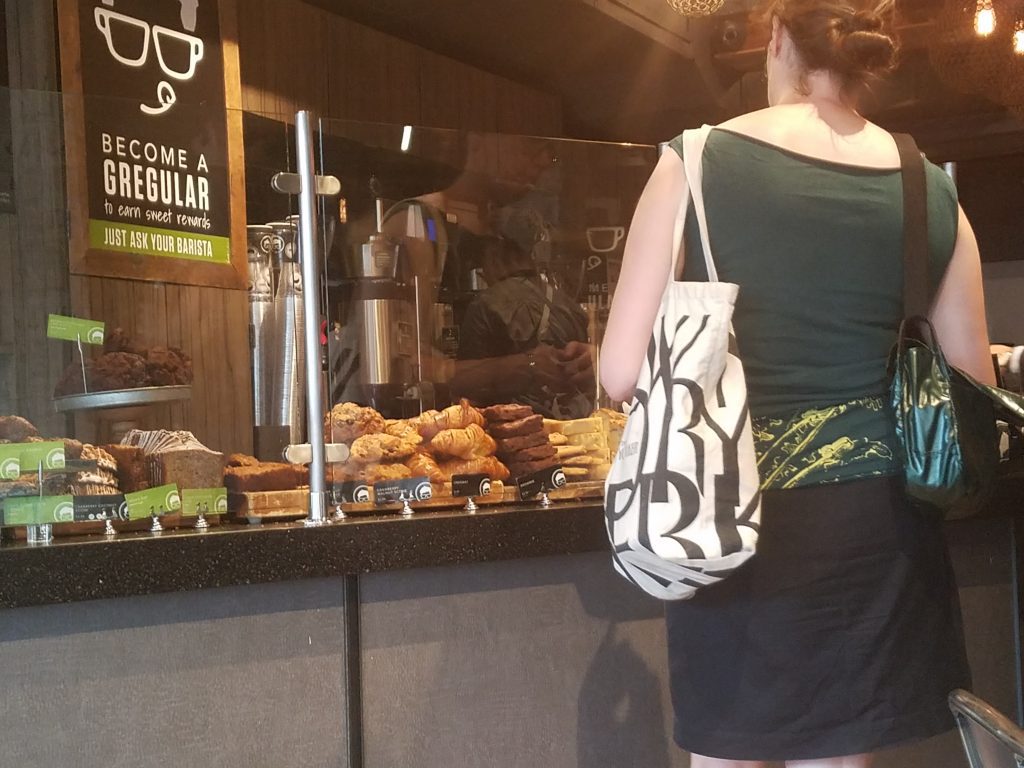 It’s kind of like an episode of The Twilight Zone.

It starts on a subway platform, on some steamy evening jaunt to grab a gallon of milk, and it doesn’t stop. That black-and-white pattern is everywhere your tired eyes turn; those tote bags on which it has been placed, chained to your contemporaries’ shoulders.

The bags can talk, too. Their ubiquity seems to whisper in your ear, as a bead of sweat rolls down your neck, a cool breath that says: “You don’t read enough.”

The villain in question is, of course, The New Yorker tote bag.

A minimalist-chic symbol of style, smarts, and — quite literally — one’s subscription to The New Yorker, 2017’s “it” bag continues to be in high demand.

Fashionistas don them; subscribers are subscribing faster than the bags can be produced and shipped off to locations all over the world. And still, in 2018, the bags are near impossible to avoid in public. Where there’s a will, there’s a collarbone sponsored by The New Yorker.

#literacy in a sea of train delays

So, why have these complementary carrying cases resonated so well? How has a canvas bag bearing a simple, bi-chromatic design become a beacon of all things “cool”?

It starts with the anatomy of a trend. Society burns through them like Yu-Gi-Oh cards: one minute it’s velour Juicy Couture tracksuits, and the next it’s fitted Abercrombie & Fitch tees. Nothing seems to stay “in” for very long, but consumers are keen to keep up with the climate. So when the next frock du jour reveals itself, they flock.

But the allure of The New Yorker tote bag goes deeper than this (and perhaps that’s why it has lasted): trendiness aside, the act of toting promotes one’s perceived intellectualism, and thus, status.

Holding on to TRUTH for dear life #totebag #totesnewyorker #newyorker

Sure, reading The New Yorker is something to brag about. The pieces are far from breezy; David Remnick’s fine-combed beast of a publication boasts lofty language and topics alike.

Yet there’s something sly and passive-aggressive about the nonchalance of a tote bag. It’s not like the person wearing one is striking up a conversation about a New Yorker piece he’s read and loved — he is, instead, more often than not, subtly inching closer and closer to you on the subway, jutting out his right shoulder, hoping you’ll notice. But hey, if you don’t, it’s chill.

And that detachedness only elevates the “status” of the wearer. For people who think they are above, you don’t have to come out and say they’re above you — they’re much too busy, too savvy, for lowly antics of this sort. Instead, they have the luxury of putting that energy into something like a new car, or, in this case, a tote bag.

After all, a bag that only says three little words — The and New and Yorker — is like a cartoon caption: the brevity speaks for itself. The power is in the minimalism, the effortlessness, the unsaid.

Then there is the earth-shattering realization that some people who partake in the toting don’t actually read The New Yorker that much. If at all. You can buy a TNY tote on Amazon for $10 — no subscription required. The New York streets are, undoubtedly, filled with these disingenuous bags.

And social media’s daily influx of tweets and posts, both reverential and sardonic, make it hard to tell whose affection for capital-L literature is real and who wouldn’t recognize The Phonies if Holden Caulfield himself pointed them out. It poses the age-old question: do you have to like the band to wear the t-shirt? Or can you just wear it because it’s black, and black is kind of your thing right now?

am i getting a subscription to the new yorker just for the free tote bag? pic.twitter.com/dqEig8edpc

Again: The Twilight Zone. The line between fact and fiction, between style and substance, has become so blurred that The New Yorker is now synonymous with purses. So how do we find purity?

In connection, maybe. Maybe the totes are a new way of communicating — maybe trends, moreover, are less of a desperate peer pressure and more of a surefire way to relate to other humans on a subliminal level. The New Yorker tote bags are, for better or for worse, something people have in common. Silent cries for help. Semaphore on canvas. Look at me, they say. I’m human like you.