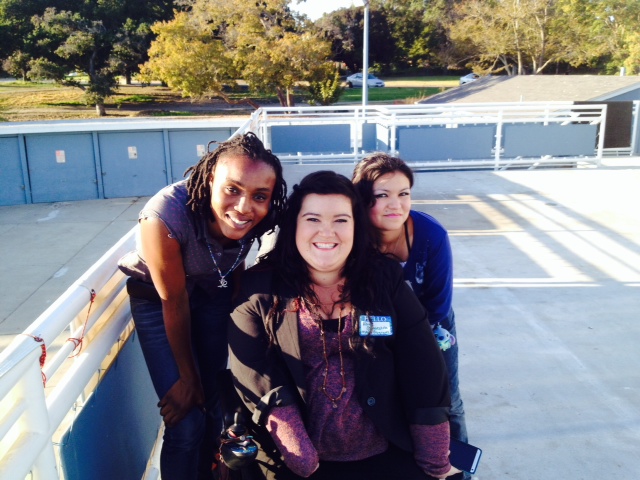 Kaye Lamaestra (center) runs the MAPS program at the Center for Independent Living in Berkeley, Calif. She nominated Alaina Wiggins (left) and Erika Barrios (right) for Youth In Action awards.

In celebration of  National Disability Employment Awareness Month, several young people were honored at the Youth In Action Awards ceremony, an annual event put on by the Oakland Mayor’s Commission on Persons with Disabilities.

Teachers and program directors nominated young people who were excelling in their studies or jobs.

Erika Barrios was one of the honorees. She is currently an intern at the MAPS program, a mentorship program for teens with disabilities, and plans on attending Berkeley City College in the spring to study acting and become a sign language interpreter. “I feel pretty excited. It means that I’ve been appreciated and did a lot of accomplishments,” she said.

Kaye Lamaestra, Youth Program Administrator at the Center for Independent Living, nominated Barrios. “When [Erika] came into the program she was super shy and introverted and didn’t know what she wanted out of life. Now she’s running the arts studio, she’s the supplies manager… Even students who aren’t motivated in the arts, she finds ways to get them engaged,” she said.

Damary Bustos, another honoree, was excited to be recognized. “I feel really excited and I feel that I’ve been accomplishing a lot of things this year,” she said.

Stephen Beard, the chairperson of the Mayor’s Commission on Persons with Disabilities, said the event is important, and allows each honoree to be recognized for their own personal story.

“There is a tendency in our society for people who are able-bodied, not dealing with a disability, to think that anyone in a wheelchair is just stupid. To think that someone who is visually impaired isn’t smart. There’s a bias. So by doing events like this we hope to broaden awareness that people are achieving great things and surpassing what people expect of them,” he said.

Amy Burns, a teacher at Skyline High School in Oakland, was excited to be supporting her nominee, Brandi Iwahashi. “[Brandi’s] on the leadership at Skyline, she helped with all the different spirit days, she’s a positive role model in the classroom. All her teachers enjoy working with her, and love her good nature and spirit. She volunteers with the food bank and she’s active with her church. If you meet Brandi you just think she’s an amazing person,” said Burns.