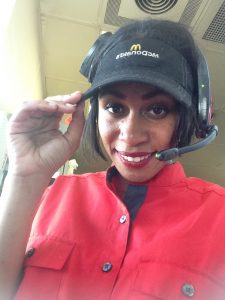 Eighteen year-old Alicia Donaldson works at a busy McDonalds in East Oakland. Her job is more complicated than you might think. 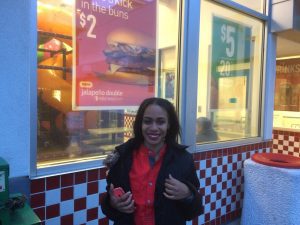 Alicia Donaldson outside her workplace holding her phone. She hopes to use her raise to upgrade to a new iPhone 6. Youth Radio /Ike Sriskandarajah

The highest minimum wage in the nation just went into effect in Oakland, California. Today if she works those same hours, Donaldson estimates she’d make about a hundred seventy dollars more every two weeks. Laughing with a dreamy look in her eyes, Alicia says that for her the extra money could mean a few new toys.

But for 20 year old Alex Oshiro, who works as a busser at Yoshi’s Jazz Club in Oakland, the raise means he can start to save. Taking a minute before he goes to work, Oshiro, sporting spikey hair and carrying his uniform in a backpack, is in a good mood. He has big plans for the extra cash.

“Honestly the first thing I thought of was, ‘Oh I can probably move out now,’” he says.

Rent is expensive in the Bay Area, so Oshiro lives at home with his mom, grandma, and brother.  But now he hopes he can finally afford to leave the nest. 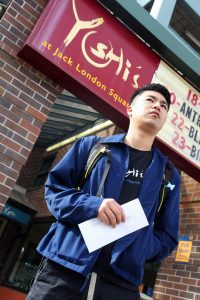 “Yeah, living is going to be a lot better for me,” he anticipates, “I’m gonna be able to just start living as an adult now.”

For some business owners, the cost of that freedom for their workers means higher prices for their customers.Farley’s Coffee Shop owner, Chris Hillyard, hosted a press conference announcing the new minimum wage.

“In Farley’s 26 years, we have never faced as dramatic of increase in cost and operations as  the 36%  minimum wage hike in Oakland,” he says.

Even though the owner supported the raise, he acknowledges the hardships the new law brings.

“To raise wages we need to generate more income. To make this happen over night we must  raise prices,” Hillyard explains.  “We stand here today to ask Oakland to come together and support all the cafes and restaurants that are in this unprecedented position.”

Oakland’s citywide wage increase is the most dramatic in the country.  Many cities in the Bay Area and nationwide have approved tiered raises over several years. Sylvia Allegretto is an economist at the Institute for Research on Labor and Employment at UC Berkeley and she’s been tracking minimum wage initiatives across the country.

“We have states now, such as North Dakota. Kentucky’s talking about a minimum wage; Louisville, Kentucky, where there’s never been a minimum wage above the federal level,” says Allegretto.

President Obama proposed increasing the Federal Minimum Wage from $7.25 to $10.10 during a State of the Union address. Opponents to the increase are concerned that it will slow job creation and that businesses will reduce hours. The Oakland City Auditor’s report on the financial impact of the new law notes that the increase could force the city to reduce its Workforce Training Programs, which would leave more youth unemployed.

For Alicia Donaldson at McDonald’s, she’s already seeing shorter shifts.  “I do think that it’s because of the pay that they’re cutting hours,” she says.

That means she may have to save a little longer to get that iphone 6.
This story was produced by Youth Radio.