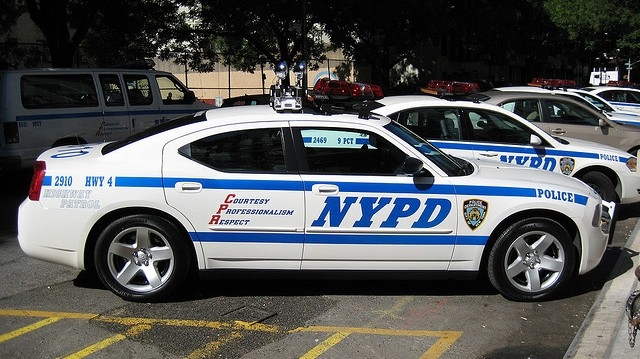 Youth Radio’s Joshua Clayton doesn’t have a high opinion of the police. In fact if he was robbed — he wouldn’t even call them. Clayton, 20, grew up in Oakland, Calif., and thought these problems were specific to Oakland. Until he spoke with Kasiem Walters, 18, who lives in New York City. Walters has advocated for ending the stop-and-frisk policy that a federal judged recently ruled unconstitutional.

Check out the conversation they had below.

Clayton:  Describe one time when you were stopped — what made it scary? Memorable?

Walters: The first time, when I was 13 years old. I was just doing my regular routine on my way to school, waiting for my friend as always. The cops came and I guess they saw me waiting outside the house, and they started picking on me and abusing me… That’s the most memorable time — they emptied out my pockets.

When you’re young you think about growing up and being a police officer or a firefighter and to see them make fun of me, empty out my book bag, stop and frisk me in front of people — made me feel like a criminal. From then, once it started, it became something I was devoted to stop.

Clayton:  When that happened, did it make you want to know your rights?

Walters: Oh definitely. When that happened at first, I was really afraid. I didn’t want to do anything, I just stayed at home for a really long time. I almost messed up my life. I almost failed school. I was very anti-social, I was afraid to walk on the streets in my own community.

There was a point where I got robbed and I didn’t call the police.

Clayton:  I had a few experiences myself. I grew up in West Oakland, Calif. Even though we don’t have that law [the police] abuse their rights anyway. At first I thought it was only in Oakland, but hearing your side of the story really opened my eyes. So, how do you avoid getting stopped and frisked?

Walters: I would try to dress differently, less dark colors, less hoodies. I would walk away from police, cross the street. But then I thought, I’m not being myself. I’m buying into what they want me to do. What I started to do was really learn my rights. We learn so much in school, but sometimes you have to go that extra mile. Because now I guarantee you, there’s no cop in New York City that can stop me. If I was going to walk out on the street right now and a cop tried to stop and frisk me, I know my rights.

That’s what I fear — the rest of these young brothers don’t know that. Instead they say “F” the police which is giving the police a reason to do something to them.

Clayton:  What rights do you use when you’re stopped?

But what you don’t want to do is say,“Oh, I’m going to put this on YouTube.”. You have the freedom to not say anything at all.

Clayton: Do the police make you feel trapped?

Walters: Oh definitely, especially because I live by the precinct. I know my rights, but a lot of young brothers can’t do what they want to do.

Clayton:  A lot of things you just said, I didn’t even know. You just boosted my game up a little bit.  Anything else you want to add?

Walters: Just educate. Watch a video online. There’s so many resources. It could be a conversation. If there was one things I could tell a child to do, it wouldn’t be — Don’t wear a hoodie — it’s not even about that. Just learn your rights. It’s simple.