Lane Murdock, a student at Ridgefield High School in Connecticut, and some of her peers organized another anti-gun violence student walkout for April 20, 2018, the 19th anniversary of the Columbine massacre.

Ridgefield’s #NationalSchoolWalkout is packed! Everyone is so excited to bring change to America! pic.twitter.com/sjikangnqG

Much as they did last month on March 14, students across the country marked the day by walking out of class, holding moments of silence, giving speeches, holding rallies, honoring the dead, marching to their capitols, and more.

I walked out so far I ended up in NY !❤️ Remembering Columbine today in our moments of silence, in servicing our communities, and in loving each other. Orange is the color for gun violence survivors, and we wear it today in solidarity of one another. pic.twitter.com/9SFSACvMlb

Just participated in my school's version of the #walkout I feel empowered but also that I should do more. A lot of emotions going through me currently. pic.twitter.com/VsjsN8k3km

Here’s a snapshot of the 4/20 #NationalStudentWalkout — based entirely on the reports of students themselves. 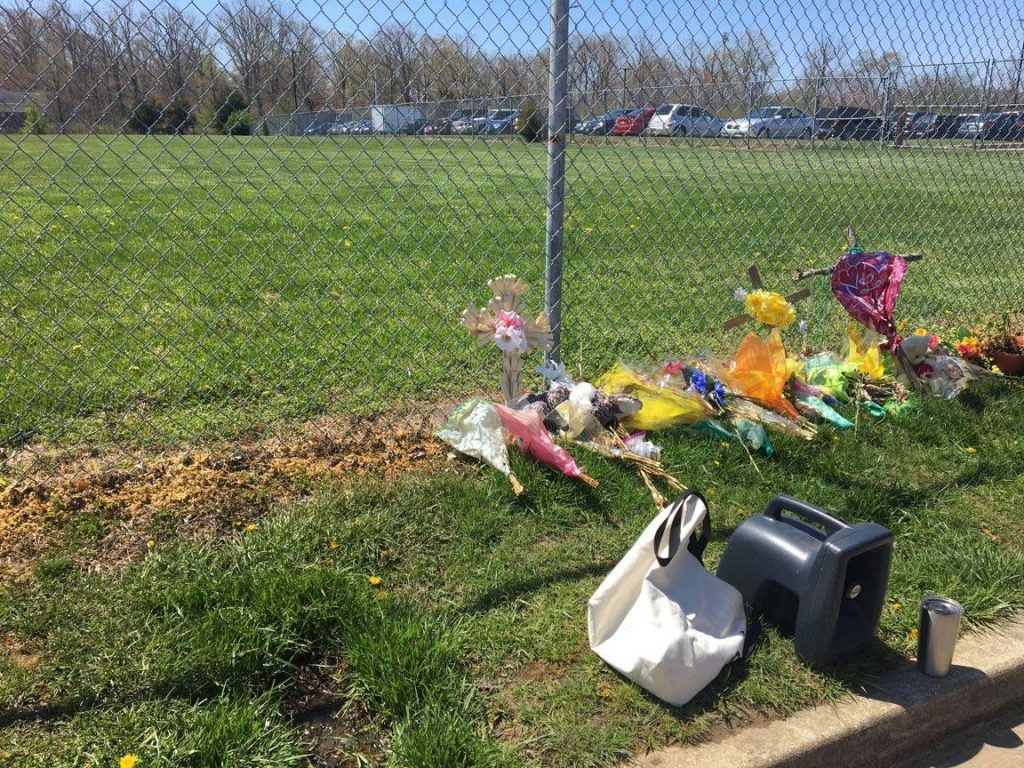 Great Mills students remembered the classmate they lost to gun violence one month ago. (Photo by Mollie Davis)

Students at Great Mills High School in southern Maryland didn’t just walk out — they held a remembrance for their classmate Jaelynn Willey, who was shot to death at school exactly one month ago, on March 20.

Yesterday, a few Great Mills students went to Capitol Hill to meet with their U.S. senators and talk about gun violence, including Mollie Davis, whose tweet during the shooting went viral.

Today I had the pleasure of meeting with students from @GMHS_SMCPS to discuss #GunSafety. Because #EnoughIsEnough.

Thank you for lending your voices and your energy to keep this cause on the front-burner. You and your generation will change minds – and our country. pic.twitter.com/lX4OSkoO5h

(Part 1/2) Everyone who knows me knows that public speaking is *not* my thing. Seeing as I have a stutter and anxiety it’s not a surprise. But since what happened at my school I have found it comes easier, as sad as that is. Don’t forget about Great Mills. #EnoughIsEnough pic.twitter.com/IX5YS3bgRW

Before the walkout, she shared her thoughts with Youth Radio, along with two other student leaders, Zak Lanis of Fairbanks, Alaska, and Isra Hirsi of Minneapolis, Minnesota.

“Because there are thousands of people who can’t walk out … because their lives have been taken.”

Other schools remembered community victims of gun violence as well.

Representing in our yellow Sunshine a fellow peer who passed during this walk out #NationalSchoolWalkout #sunshine18 pic.twitter.com/VE0qHW63xa

Walkouts — and more — swept the nation

Turnout this time around was expected to be lower than last month, but still, thousands of students nationwide walked out and rallied.

walkout @ 10am in the band field rt to save a life#fisdwalkout #notonemore pic.twitter.com/O5wKctUEzJ

Thank you to everyone who joined our Walkout today! It was amazing to see how much love we have for one another and together we can do anything! #bethechange #enoughisenough pic.twitter.com/oXFAB0UJkx

Look at this turnout! Thank you Ravens! pic.twitter.com/8ebsSW8FeC

My school walked out in protest against gun violence today. The district didn’t support us walking out who cares!? It’s our lives being taken, and it’s up to us to move to change it. #NationalSchoolWalkout #MarchForOurLives #FallsSaysEnough pic.twitter.com/gfXWt4MTKj

little, but still amazing. this is something no one can take away from us ? #NationalSchoolWalkout #JFKWalkout ? pic.twitter.com/cKCUoqwdQO

Never been more proud to be an Academy Woman #NationalSchoolWalkout pic.twitter.com/YMqZ8e4Uxu

So proud to be a part of the future. More people than I thought. And my principal was so supportive of us that we won't get counted as tardy if we write a letter to our state legislator. #NationalSchoolWalkout #NeverAgain pic.twitter.com/UTLTocnvNX

I’m glad I was able to listen and be a part of this small step to change. It’s time to take a bigger leap to change. #nationalwalkoutday

The speech I gave at my schools’ walkout today. Afterwards a group of kids and I were told we couldn’t protest on school property, so we got checked out and are at a park by our school protesting. @schoolwalkoutUS @AMarch4OurLives #NationalSchoolWalkout pic.twitter.com/Ir70SOQVQn

Some students walked out alone

I’m the only person that walked out, because i care about our safety pic.twitter.com/g87u9FuBpt

I am all alone at my school, but I know I am not alone. #nationalschoolwalkout #columbine pic.twitter.com/1zozqfKIYw

Hey hey, ho ho, there’s only 3 people at my schools walkout today but the NRA has got to go! #NationalSchoolWalkout #neveragain pic.twitter.com/DsTGrhMJhM

only person to walk out in my school #NationalSchoolWalkout

Me and 7 other students out of 3,000 at my school walked out today for #walkout #schoolwalkout Still we will make a difference ❤️

She says she and only one other walked out at her school #NationalSchoolWalkout https://t.co/0FNmFn9OQD

He was up until 1am making 11 posters for his friends, but they all backed out last minute.

Speak up even if you’re the only one to do so. @schoolwalkoutUS pic.twitter.com/yVlN0S4Bb1

the only one to walk out today, but it was worth it. #EnoughIsEnough #NationalSchoolWalkout @Emma4Change @ACLU @womensmarch pic.twitter.com/IRXY85ZaNn

Though Justin Blackman, who went viral last month for walking out alone, had a crowd join him this time.

While many faced consequences at school

Many risked getting in trouble — or chose to just participate in spirit.

This student says she got suspended for organizing her school's walkout ?#NationalSchoolWalkout https://t.co/qe8Pqfg9zp

Kids in my school are getting suspended for doing the Walk Out today. I'm personally am not walking out, but to everyone who is, don't be like me, stand up for what you believe in.

We may not be allowed to physically participate in the #NationalSchoolWalkout because our school @KellerCentralHS and @KHSIndianNation have received threats of violence if we do, but we are participating mentally! #NeverAgain

@CNN our principal telling students they will be written up and have consequences if they walkout today for the national walkout pic.twitter.com/m24HEzz3ht

@schoolwalkoutUS My friends and I were planning on walking out during second period at 10 AM as soon as we want to leave they started a fire drill. And they blocked every exit and have teachers standing in the hall. Instead of being quiet we held our posters high during the drill

Today at clear lake high school the administration threatened to give ISS and take away prom for anyone who walked out, they even went as far as making attempts blocking students from walking out, this violation of the students rights to peacefully protest must not go unnoticed

Some put the focus on urban gun violence …

… As well as police brutality and other ways people of color are disproportionately affected by gun violence.

i am so proud of my peers for walking out against gun violence. when we talk about gun violence and activism, we must also discuss systemic violence/police brutality/violence towards marginalized groups

This was the focus of a group of marchers in Philadelphia, among others.

A crowd listening to the Black Student Union, on how gun violence for POC, and inner city-students is often overlooked. pic.twitter.com/nrOKHcrc6g

And others devoted the day to community service or voter registration

That’s the tradition of Columbine High School for marking this sad anniversary — and many community members carried it out today.

Shout out to all of our lacrosse players, who are honoring today by doing community service. pic.twitter.com/houVj5uxJY

Remember after you guys walk out, volunteer! Spend the rest of your day working in your community. This is also a day of service in remembrance of the Columbine Victims. #NationalSchoolWalkout

Some helped people register to vote.

Thank you to everyone who joined us in the walkout and registered to vote! If you didn't come out you can still register!

Please read this little hand out and excersize your right to vote!

Become an active and responsible member of society and prove you care about your future! pic.twitter.com/yTbhiAZAXz

I spent today participating in the #NationalSchoolWalkout and helped make change in my community by helping others register to vote! hbu??? pic.twitter.com/9V5lfmgfXq

while being a small school we do stand for BIG concerns! #NationalWalkoutDay walked out, had people register to vote, and made letters for congress! ? very great outcome pic.twitter.com/wSIevSv76S

Meanwhile, some chose not to walk out

Ruby Noboa is among those who feels that while the #NeverAgain movement is doing good, it isn’t focused on the issues she feels are most important. She walked out last month, but she chose not to today.

And students like Alexis Buxton stayed in school because they are strong supporters of the Second Amendment and while they too want students to be safe in school, they don’t feel included in the #NeverAgain rhetoric they hear.

Alexis Buxton is a HS student in the small town of Scott City, Kansas, where proud gun ownership is prevalent. She's pro #2A & says #NeverAgain doesn't represent her & she's not doing #NationalSchoolWalkout: pic.twitter.com/RQ9u0gQOkT

My sign today at my schools “walkout” @benshapiro @WalshFreedom pic.twitter.com/gTfRGe7NwG

Did you know there was a school shooting today?

Yes, today. One student at Forest High School in Ocala, Florida, was shot and injured this morning.

Some students can't participate in the #NationalSchoolWalkout because they are barricaded in.

This is a photo from Forest High School in Ocala, Florida where a shooting occured this morning. https://t.co/4rYM0XWYwS

Fortunately, no one was killed. But still.

Forest High School. My cousins high school. It’s been 19 years since Columbine and now this happens. I don’t wanna believe it. I still don’t. We don’t need guns. We don’t need violence.