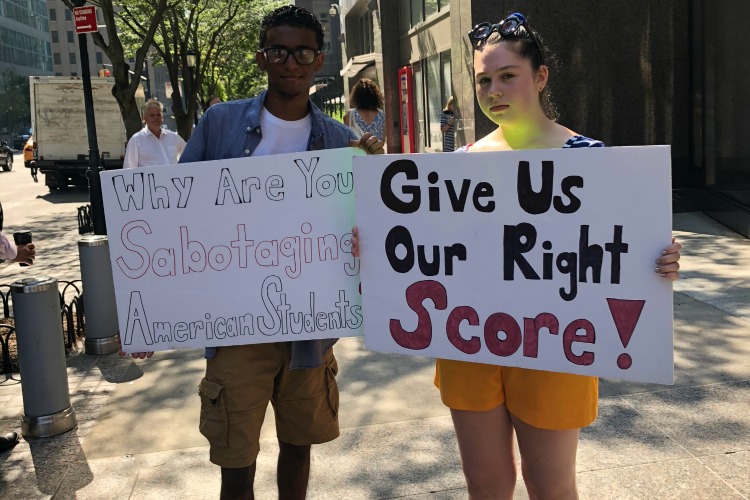 Rochelle Zaks, 16, a homeschooled student, and Joel Veras, 16, a student at Academy of Innovative Technology High School, protesting at the College Board. Photo by Saskia Van Horn

Saskia Van Horn wants the College Board to hear her and listen, much like many high school students around the country who are demanding for their June SAT tests to be rescored.

Van Horn will be a freshman at Queen’s College in New York this fall, but she would be preparing for school much differently had she received a different SAT score.

“I’ve taken the SAT four times,” Van Horn said. “I found the June SAT to be nothing different than all the past SATs that I had taken. However, within the past couple of days on Twitter there has been a hashtag #RescoreJuneSAT, so I looked at it and saw the College Board confirmed that because this test was easier they had taken 90 points away from students even though the students rightfully earned those 90 points.”

I know I shouldn't complain b/c I'm in a better shape in math than others. But I got 14 LESS questions wrong on English and I have the same score??!?#rescoreJuneSAT pic.twitter.com/hpZXdy0OPW

Here's a document with scores from twitter compiled together. If everyone can put in their scores/question amounts for evidence that would be great#rescoreJuneSAT#RescoreTheJuneSat

College board! One daughter got 760 getting only 5 wrong in math in March. Her twin missed 6 in math on June 2 test and got 670? 90 point difference in overall SAT scores for just ONE math question? How is that fair or standardized? So many kids hurt ?? #rescorejunesat

well that doesn’t add up ?look, i understand college board won’t #rescoreJuneSAT , however i’d like to make sure the world is fully aware of how absurd this is and ensure it doesn’t happen again pic.twitter.com/wOPjVAzk3z

#rescoreJuneSAT this is not a 1 hour subject test. this is a 4+ hour test that requires HOURS of work, mental energy, and patience before u even step into that testing room. the solution of just “retaking” another test is not financially viable for some, and is exhausting to all

Hi Colton – We understand your questions, however, the June SAT scores we reported are accurate. If you'd like to learn more, please see the FAQs we just shared on our blog. https://t.co/ge7OBe8h2i

Van Horn says she earned an 1150 on the recent SAT, which she said wasn’t too different from her previous scores. But, with the other 90 points she earned, her score would’ve been a 1240, which would’ve changed everything for her.

“I would’ve been able to join my school’s honors program, which would give me a full ride, instead of having to take out student loans or having to finance my education,” she says.

Van Horn and other students unhappy with their scores have taken to Twitter using the hashtag #RescoreJuneSAT. And not only that — she and three other students who connected through the hashtag decided to go to the College Board Headquarters to protest Monday.

Here are pics of @Roro_Strudel @Joelveras11 and I at the protest at the College Board HQ in NYC. This is just the start of our movement. Stay tuned! #ReScoreJuneSAT pic.twitter.com/tgs885w7VB

Van Horn says the College Board has refused to rescore the tests because the scores were the product of their decades-old standard equating policy, which ensures that scores from different tests are equivalent by taking more points away for wrong answers on easier tests.

Here is information for the students who reached out with questions about their June SAT scores. pic.twitter.com/ngXywO88ji

Van Horn says this is only the start of the movement and that she is planning future protests with students online.

hey guys! I was just thinking, if we all wanted to be apart of ONE huge protest we could all make our own signs/videos and stuff and post that on twitter too! It'll help put some faces behind our movement and it could get a lot of attention too! whatcha think? #rescorejunesat

Van Horn also wondered what implications this has for other College Board tests.

“The College Board, by penalizing students the 90 points that are rightfully earned, they are keeping students from being able to apply to colleges, get financial aid, get scholarships, and even enter honors programs that can benefit them,” she said. “Therefore, they are impeding on one’s ability to seek a higher education.”

She also wonders, “If the College Board administrated other tests besides the SAT — they also administrate the AP tests — at what point in my high school career am I worthy enough to be considered for a college education?”

If their protests don’t work, Van Horn says students will also begin going to their local governments and politicians.

“The College Board is underestimating us for our age, and in the process we are creating a movement to abolish the SAT and standardized testing — and we will seek higher education reform of our politicians and even go to the federal levels of the United States if we have to,” Van Horn said. “Because we want a judicial hearing on the practices of the College Board because clearly there is evidence that shows that what they have done is not just a one-time scenario.”