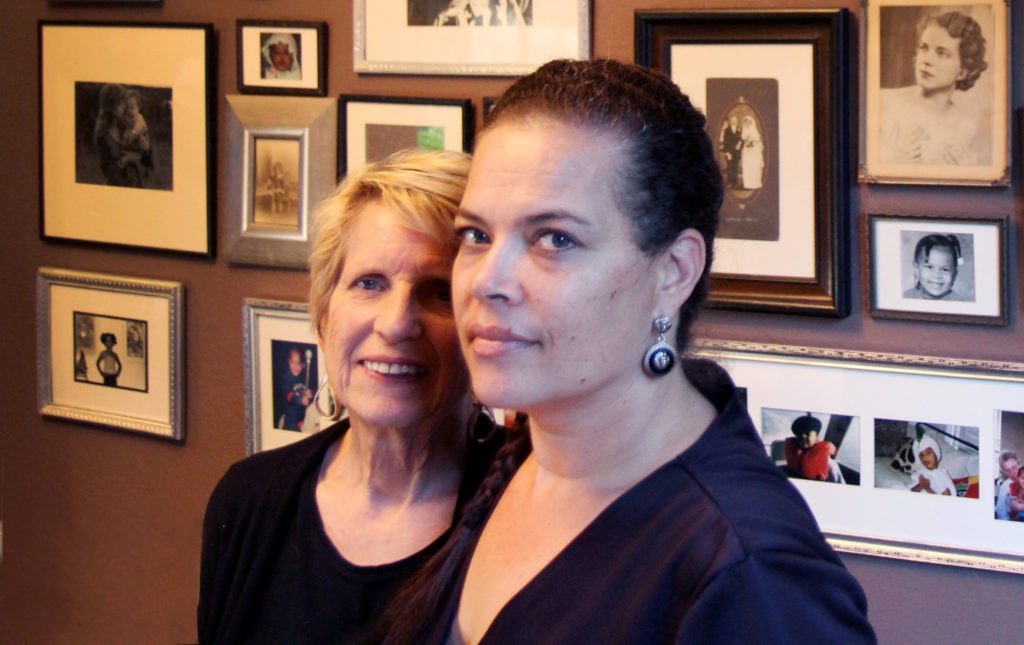 Zoe Mathews (right) and her mother Jackie stand in front of a wall of family photos, including childhood pictures of Zoe’s son DeShawn Morris. DeShawn was killed several months after being released from Juvenile Hall and years later, his mother is still paying the fees for his incarceration. Photo: Teresa Chin/Youth Radio

The night that 17-year-old DeShawn Morris was arrested for armed robbery, he was at an optimistic turning point. According to his mother, Zoe Mathews, Morris — who was an intern at Youth Radio — was excited about entering a teacher training program the next day in San Leandro, California. In his application, Morris wrote, “I have had a couple of great teachers who really understand me…but my three favorite teachers who I respected the most were men who look just like me and come from the same struggle.”

Out with two of his friends (who were, like him, young black men) on the evening of July 20, 2010, Morris was standing near a bus stop in Oakland when a police officer drove by and shined his car’s headlights on the group. They chose not to run, he told an officer later,“because we know we haven’t done nothing.” From another police car, a victim who had been robbed at gunpoint a few blocks away identified Morris as the suspect. Morris was charged with the crime, even though no stolen items were found in his possession. According to his case file, “he reported that he feels bad that the victim was robbed, as no one should have to experience something so traumatic; however, he is angry that he was misidentified as being the person responsible for the robbery.”

Morris served 56 days in juvenile hall, and 152 days in a boot camp in the Mendocino National Forest called the Fouts Springs Youth Facility.

It’s fallen to Zoe Mathews to speak out about what she says was a case of racial profiling and mistaken identity, since her son can no longer advocate on his own behalf. Morris was shot and killed in Vallejo in June 2012. Nearly two years after her son’s death, Mathews can’t put his run-ins with the juvenile justice system behind her, and it’s not just because she disputes the robbery charge.

In 57 of 58 counties in California, the state with the highest population of incarcerated youth in the country, young people don’t just pay for their crimes with their incarceration — they get a bill. Juvenile offenders are charged a percentage of the counties’ costs for incarcerating them, and later, for a partial cost of probation services. In Solano County, where DeShawn Morris served time, these charges are for “Care, Support, and Maintenance” – services that include staffing, clothing, and health care.

In Alameda County, which includes Oakland and Berkeley, the practice of charging juvenile offenders to process their cases is only five years old. For suspects older than 16, the meter starts running even before indictment, with a $250 charge for the investigation that’s initiated after an arrest. For a juvenile who’s been detained for the average time in Alameda County — 23 days — the total bill will be close to $2,000.

“We’re trying to get blood from a stone in many situations,” said Beth Colgan, a Thomas C. Grey Fellow at Stanford Law School who’s written about the history of fees charged by the criminal justice system, which she says incur as much as 12 percent interest in some states. “These fees can be detrimental to people’s ability to get back on their feet. One of the strongest arguments against these fees is that they do perpetuate inequality and poverty in a way that might make many people uncomfortable.”

There’s an easy answer to all this, if you talk to Terry Wiley, Senior Deputy District  Attorney for Alameda County’s Juvenile Justice Center. “Don’t be committing crimes, and you won’t owe any money.” He’s matter-of-fact about it, but the prevention approach doesn’t count for much once an offender is already caught up in the justice system. Offenders, like other taxpayers, are stuck with any overcharging produced by the system’s inefficiencies. In an interview for the documentary film A Matter of Respect, Wiley himself says that though local police departments may do a good job investigating a case, “what they bring over in terms of police reports and their version of events they’ve got from witnesses is not always what really happened.” In Alameda County, the fee for investigations, accurate or not, is charged even if a suspect is exonerated. And if certain other fees, like court-ordered victim restitution, aren’t paid, judges have the discretion to reincarcerate offenders.

What’s more, offenders aren’t the only ones paying for their heedlessness.

In California, the bills for juvenile offenders go to parents like Zoe Mathews. According to a 2011 report from the National Center for Juvenile Justice, 29 states require courts to order payment from parents.

The financial responsibility begins from the moment an arrest happens. In some cases, parents can negotiate certain fees if they can’t pay, but rules vary around the country. When the bills aren’t paid, officials can involve collections agencies, garnish parents’ wages, or take their tax refunds.

Mathews is still on the hook for more than $7,500 in fees related to her son’s incarceration for the robbery charge, and a previous misdemeanor. That includes 56 days in juvenile hall at $30 per day, for a total of $1,680. Probation supervision racked up an $1,800 bill. And Mathews, who’s been exceptionally persistent in chasing down answers from the juvenile justice system, isn’t prepared to pay for certain bills that she views as unfair.

In a lengthy email 2012 chain between Mathews and Jeff Liddicoat, who was then a Senior Staff Analyst with Solano County’s Probation Department, Mathews asks for the math behind some of the line items on her bills. Liddicoat replies that he can’t comment on individual cases. But he does outline the rationale behind the bills: “To be financially prudent to the county taxpayers and voters,” he writes, “the County must collect fees for its services…to reimburse the County for services that are not provided to the general public as a whole.”

That is, in addition to taxpayer revenue, minors who commit a crime in Solano County – which has the lowest per capita income in the San Francisco Bay Area – must pay for the fees incurred by their crime. In 2012, these fees were less than one percent of the Probation Department’s $28.5 million dollars in revenue.  And according to Stanford’s Beth Colgan, counties often spend a lot more money trying to collect the fees than they recoup. But “as counties get crunched economically,” she told me, “this has been the response.” Between 2009 and 2013, at least eight states introduced legislation dealing with parental payment obligations; in 2011 alone, the National Center for Juvenile Justice reports, Utah, Idaho and Texas proposed such laws.

Juvenile justice advocates tend to agree that in general, the public isn’t very well informed about the workings of the justice system and its costs, unless they experience it directly. “When that happens,” National Center for Juvenile Justice Director Melissa Sickmund wrote in an email, “they often go through the process not understanding what is happening to them or their children. Advocates are pushing for use of more ‘common language’ in court. There is research that shows that even if justice decision making goes against someone, if they have been treated fairly…they are more likely to comply.”

Zoe Mathews is a working single mother of three. She says she can’t afford the payment arrangement determined by Solano County for fees related to her deceased son’s time in detention and on probation. She’s tried to negotiate with the county to waive the fees, she says, but the county would only lower the monthly payment.

The phone calls from county bill collections agency have stopped, but now Mathews is receiving letters threatening to garnish her wages if she doesn’t pay. Although she says she understands why the county aims to recoup some of its costs, Mathews calls the fees to juvenile offenders “double-dipping.” They’re unfair, in her view, once an offender has served time.

“That’s supposed to rehabilitate you, and you’re paying your debt back to society,” she said, “so then they’re going to charge you an additional per night stay? As if you elected to do that, as if there were some options?”

She paused, then said coolly, “No, I don’t think that’s right at all.”

A version of this story was first published on TheAtlantic.com.