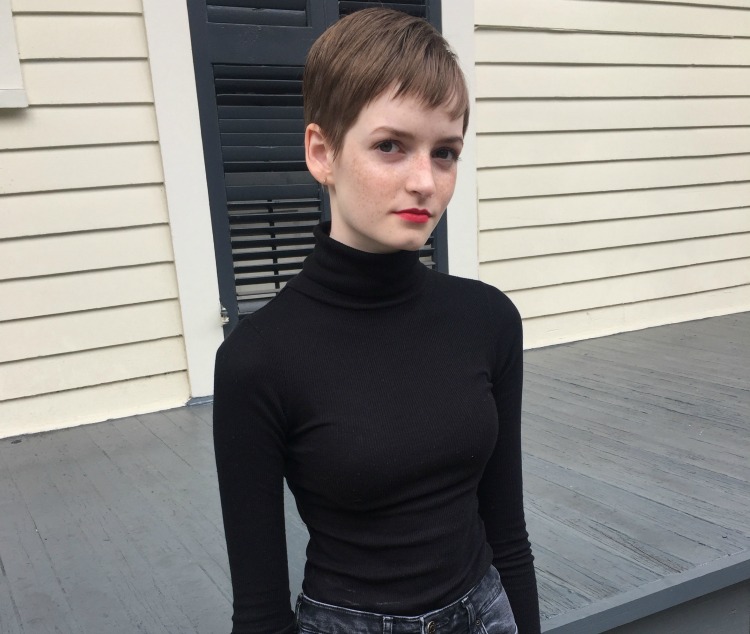 Louise Oliver, one of the March For Our Lives New Orleans organizers. (Courtesy of Louise Oliver)

Several student speakers at March For Our Lives rallies — in Washington, D.C. and at locations around the nation — got a lot of attention over the weekend with their powerful speeches.

Parkland student Sam Fuentes at #MarchForOurLives: "I just threw up on international television, and it feels great!" https://t.co/LLGEspkZrV pic.twitter.com/KMLGryvMci

Everyone needs to hear this Chicago native explain how city, state, and federal governments are enabling gun violence #MarchForOurLives pic.twitter.com/BukLEcWM23

Here are portions of compelling student speeches in Kansas City, New Orleans and Los Angeles that you may have missed but shouldn’t.

You are the cure.

I am the cure.

I may be small compared to some people… but my voice is big, my heart is open to new ideas, and I have dreams that don’t include being shot on my college campus.

Students, regardless of being old enough to vote or not, can still attend events, they can still call elected officials or phone bank for candidates, and their concerns should be taken seriously.

While some students may not be old enough to vote now, someday they will be, and will remember the people who cared about their safety and concerns.

I am 16 years old, a high school junior, a member of a generation that has become habituated to seeing mass shootings on the news: Columbine, Las Vegas, Sandy Hook. We have not known a time before lockdown drills and threats of violence.

We should be able to receive an education without having to take time to practice what would happen if a shooter entered the classroom.

We plan to continue our work and make sure that some of the attention and momentum that the march has, is directly channeled back into our community which is so plagued by gun violence.

"I have lived my whole life in the era of mass shootings…When we are talking about gun violence and the way it affects our society, age means nothing." – Olivia Keefe, @bfhsfalcons student Co-Organizer of #MarchForOurLives pic.twitter.com/yVke3LO6Jf

I am silenced by the words, “You kids don’t know what you’re talking about; you’re too young to understand why these policies will never be changed.” I hate to break it to you, but I’ve lived my whole life in the era of mass shootings.

According to Membership of the 114th Congress: A Profile, the average age of members of the House is 57.0 years, and for Senators, it’s 61.0 years.

I have a question for members of the House and our Senators: How many school shootings has the average member of your generation been a survivor of?

Some days, I stay at home and chill. Today was not one of those days. pic.twitter.com/Qq1lw9G1bM

There is a shadow haunting this country. Gun violence has loomed over us, manifesting on every city block and in the corner of every classroom. Day after day, we students live in a constant state of fear. Knowing that at any point in time, our lives could be ended.

All around this country, students live in fear—but Congress does not. And time and time again, after every school shooting, the American people are unequivocally and categorically failed by a Congress that ought to protect us.

We are the ones who shoulder the brunt of Congress’ failures. And we’ve had enough. We are sick and tired of watching our friends die while Congress sits on its hands and offers nothing but thoughts and prayers. That’s not good enough.

And if Congress chooses not to listen, we will force it to. If this Congress do not guarantee us the safety we deserve, we will elect one that will. We will win this fight.

So at the end of the day, senators, congressmen, ask yourselves: How do you want to be remembered? Because history will not favor those of you who remain complicit in the murder of our nation’s children.

My name is Jonas Poggi. And I say that enough is enough.

What other #MarchForOurLives speeches resonated with you? Tag us on Twitter @youthradio and we may add them to this post!