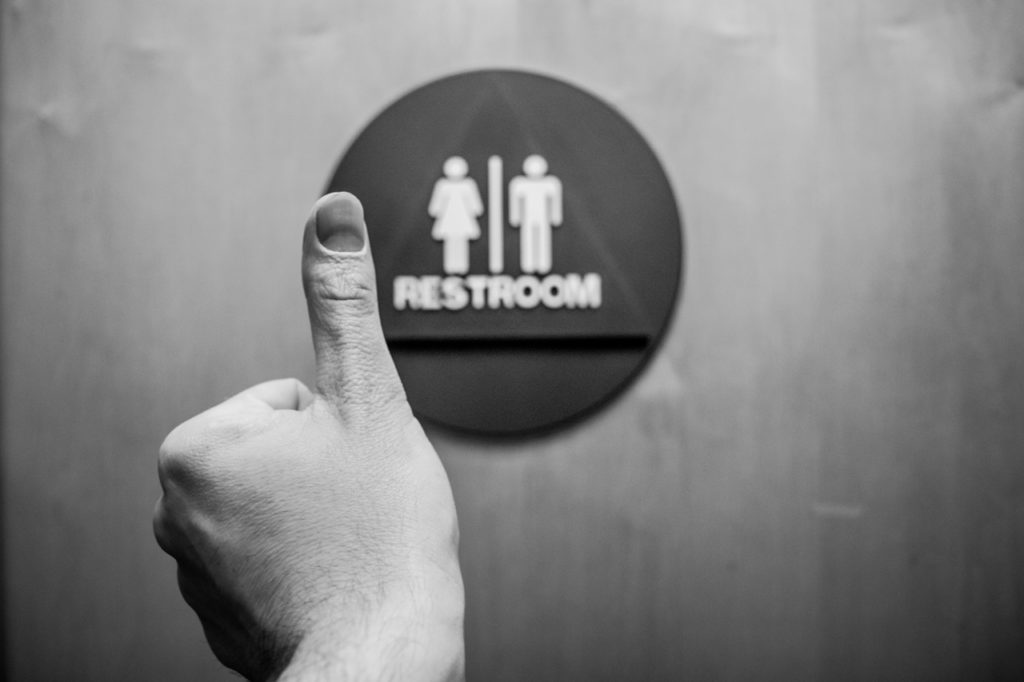 Editor’s note 2/12/18: The Department of Education released a statement on Thursday that it will not act on bathroom access complaints filed by transgender students. The Department is in charge of interpreting and enforcing Title IX, the federal civil rights law that prohibits discrimination on the basis of sex. Transgender students and their families have argued that Title IX gives individuals the right to use the bathroom that corresponds to their gender identity. When asked to clarify the recent decision, Department Press Secretary Liz Hill told Buzzfeed News that “Title IX prohibits discrimination on the basis of sex, not gender identity.”
The Department of Education’s statement formalizes the Trump administration’s position from 2017 (see below).
On Monday the US Supreme Court announced that it will no longer hear arguments for the case of Gavin Grimm, a transgender teen from Virginia who is fighting to use the high school bathroom that corresponds with his gender identity. The high court had scheduled to consider the Grimm case in October of this year, but will now send it back to the 4th Circuit Court of Appeals following recent moves by the White House to roll back protections put in place by the Obama administration.
In February, the Trump administration made it clear that the federal government would no longer require schools to allow transgender students to use bathrooms that match their gender identity. Trump’s decision runs counter to where young people tend to stand on this issue, according to recent data. A 2016 survey from USA TODAY and Rock the Vote found that millennials, by a ratio of nearly 2:1, believe transgender individuals should be able to use “public bathrooms designated for the gender they identify with, not the sex they were born.”
Youth Radio asked two LGBTQ high school students in Denver, Colorado to reflect on Trump’s decision. At first, the idea that President Trump was weighing in on bathroom rights led to some giggles:

“Ah, yes, I am the president and I have the full authority to decide where people pee for no apparent reason. I am the ultimate authority on peeing. It’s going to be really really great. Huge!”

But the conversation quickly turned serious. Eighteen-year-old Bridget Galaty interviewed her friend–a transgender boy of the same age–whose name we’re not using, for the sake of his safety.

Bridget Galaty:  I’m Bridget Galaty. I’m 18-years-old and I attend Denver School For The Arts. And while I’m a cisgender female, I tend to present pretty masculinely. I have my hair cut short and I wear men’s clothing. It’s not uncommon that people mistake me for a guy. So that’s what brings me here today.

Transgender Student: I’m Bridget’s friend and I’m going to be remaining nameless for this conversation for the purposes of safety, but I am a trans male who goes to Bridget’s school, and I present masculinely as would be evident by my identity.

BG:  I guess we’re still trying to process emotions but I guess, what were your initial thoughts?

TS:  I don’t know it was very, visceral. Very gut reaction to hearing the news. It kind of brought back all the butterflies about using the bathroom period and kinda that feeling of nervousness about which bathroom do I use? How are people going to perceive me when I go there? That same kind of anxiety that leads me to avoiding the bathroom altogether.

BG:  So we go to a pretty accepting school. So they are going to let people use whatever bathroom they want. How do you make that decision at school, if you use the men’s or the women’s bathroom.

TS:  When I do use the bathroom at school I use the men’s room as often as is convenient. It’s actually less stressful than using the women’s restroom, which–if I have to use it–I try not to use it alone. And I do have to on occasion, because there’s an issue with accessibility in the men’s rooms, not just because I can’t stand to pee, but because there’s no trash cans in the men’s restrooms. And as a person who menstruates, that’s really, really inconvenient.

So I have to use the buddy system when I use the women’s restroom because I feel like that’s not a space where I belong, and I know that it’s an important safe space for women. That’s not something I want to infringe upon.

BG:  So I guess like the big question is: why does it all matter? Like, who cares? It’s just a bathroom, right?

TS:  I think the issue is that people are deciding that sex and gender are the same thing because a bathroom is made to be accessible based on sex and not based on gender. People are having a hard time recognizing that trans is just an adjective, and transwomen are women and transmen are men, and they’re not distinct from other women or men. It’s like saying a tall woman and a short woman are different genders, which isn’t true and doesn’t make sense.

BG:  Do you think Trump’s decision is going to affect you specifically or do you think… what are the implications in your own life?

TS:  The issue is that it sets a precedent that it’s okay for transpeople to be treated as less than people and for them to not have a right to exist as the people they are in public. That can lead to aggression and to violence that really threatens my personal safety. It really just forces students to go back into the closet in a lot of ways that they weren’t, and it eliminates the ability for people to make a statement—especially transpeople and myself—to say that this is the bathroom of my gender identity. This is a place for people who are the same gender that I am. And this is a place that I deserve to be.