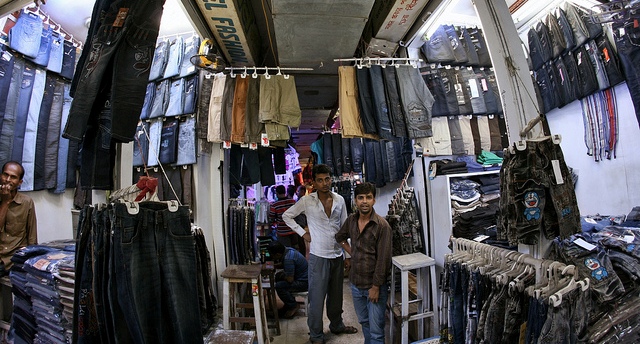 I love fashion. I’ve always loved it. I celebrate fashion week like it’s a holiday. But earlier this year, I realized the true cost of my trendy clothes when I met a group of women I’d been stealing from my whole life.

As part of an exchange program, I traveled eight thousand miles, from Oakland, CA to Dhaka, Bangladesh.

On a tour of Dhaka, I visited a factory that was making clothes for some of my favorite brands. I saw hundreds of workers crowded around sewing machines and work-tables. The sound of whooshing looms and the chemical smell of dye filled the air. But it was watching a young girl, who was maybe 10, sewing a pair of jeans that made me feel really sick. My host sister later told me that many of these workers, mostly women and children, were living on less than 2 dollars a day.

Suddenly, I looked at all the cute outfits I’d picked out for this trip in a completely different light. Before I’d seen the factory, I was so flattered when my new Bangladeshi friends had complimented my casually elegant name-brand button down. They were proud that the tag on the shirt said Bangladesh. But after, all I wanted to do was wrap my traditional Bangladeshi shawl around me to cover the shame I felt.

I’d been home from my trip for three months when I saw the horrifying headlines reporting more than a thousand people dead from a factory collapse. I know this was not the same factory I had visited, nor were these the same women or children I’d met, but I still felt close to them, and responsible somehow.
I decided to do something. To raise money and spread awareness, I organized a fashion show that featured clothes hand-made by Bangladeshi craftspeople as well as clothing manufactured in Bangladeshi sweatshops, the kind we’re use to buying. People marveled at the clothes. But it wasn’t until they saw the pictures of the workers that they began to feel what I had felt – empathy and guilt.

Since I got back from Bangladesh, I haven’t purchased any sweatshop clothes… yet. I either thrift or suck it up and look for American-made brands. But it’s worth it, because there’s a hidden cost in cheap clothing. It involves someone’s livelihood, education, life and the environment. Though I will admit, it also feels better knowing companies like H&M, Tommy Hilfiger and Calvin Klein have promised to step up building improvements and move forward with safety inspections in their factories.

That way, if I’m tempted to buy something from Beyonce’s new summer line, maybe it will feel a little less like stealing.