I was always confused kid. When I wasn’t questioning my sexuality, I was questioning my gender. By the time I was fifteen, I figured out I was pansexual. Yet, I suppressed my thoughts and confusion about my gender identity. At the time, I only knew that there was male and female and then people who transitioned from one to the other. I didn’t feel like a girl…so did that make me a boy?

I was a typical tomboy and rejected many aspects of femininity. I wore basketball shorts and t-shirts with my hair always in a ponytail. I hated my chest and the rest of my body.

I’d look down/ Seeing something foreign/ Disappointment overwhelmed me/ Why couldn’t this body feel like mine?/ Why couldn’t my face feel like it belonged in this place? 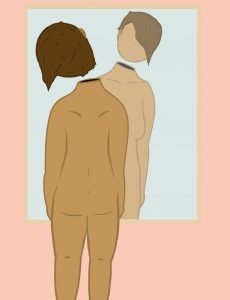 To reject my femininity, I decided to cut my long hair “boy short” junior year of high school. It felt like a weight off my shoulders, literally. Cutting my hair was the start of exploring fashion as a form of self expression. Ravaging through thrift stores to find clothes to represent myself, I thought I’d end up with dark colored t-shirts and pants. But I discovered that wearing clothes with wacky patterns and light “feminine” colors made me happy. Slowly, I realized that being feminine wasn’t as repulsive as I thought. I always had a “hippie” side and I finally began to dress like it. I wore long beaded earrings, sandals, flowy colorful shirts, and switched from using backpacks to my Mexican purse. People often told me I looked like a hippie lesbian mom and I loved it!

But what was going on??! I thought I was a transgender. I liked being “girly” but I still didn’t feel like a girl! Everyone around me seemed to fit into their gender roles without questioning it. I thought I was crazy and just making up problems for myself. I already had this little-known sexuality, so why did I want to add more things to set me apart from everyone else?

There were too many nights/ Where I slept with dried up tears/ Yet,I would wake up with no crust around my eyes/ Perfectly fine/ Last night, never existed.

That’s it!  I thought. Finally a word to describe me. But after an initial wave of relief, I started to feel disheartened. It seemed like the people who identified as genderfluid were really good at presenting themselves alternating in their gender expression. I felt like a fraud calling myself genderfluid, because my appearance rarely gave an external look to the way my internal gender felt. I didn’t wake up in the morning and think, I feel like a boy then proceed to dress ‘like a boy.’

Then I was introduced to another term

I liked this, because I could completely remove myself from the gender binary of woman – man. I contemplated my identity, juggling back and forth between genderfluid and non-binary.

To me, being genderfluid was a feeling, not a term to describe who I am. It’s like saying you’re tired. Being tired isn’t who you are as a person, but a feeling you have due to outside circumstances like lack of sleep or work overload. When I call myself non-binary, it’s just the other option. If I’m filling out a checkbox and they ask male or female? It’s neither, the other is non-binary.

So I’ve decided to be both and neither. It feels right to just say I’m a person. No label, no name. I spent so long trying to search for a label, yet I ended up taking solace in not having one.