Donate Now
08.26.14
The fatal shooting of Michael Brown, 18, in Ferguson, Missouri resonated deeply with young people all over the country. Youth Radio’s coverage of the case includes on-the-ground reporting, and collaboration with youth around the country to amplify youth voices and perspectives. Check out original photos, videos, and curated stories below.
Updated Dec. 22, 2014

DIY Toolkit: How Teens Want You To Teach #BlackLivesMatter

Youth Radio teens and teachers sat down together to come up with a lesson plan for how educators can facilitate a productive conversation about race, police and violence, grounded in a collection of stories created by Youth Radio’s reporters and commentators.
Youth And Police: The Dialogue Continues

Over the past two weeks, protesters have been hitting the streets of Oakland in response to officer related shootings, and grand jury decisions not to indict them. Youth Radio’s Joi Smith interviewed young people and long-time residents of Oakland for their reflections on police violence in the city. Sergeant Joseph Turner of the Oakland Police Department heard her story, and responded in a letter which was published alongside Joi’s reporting in the San Francisco Chronicle.

Even After Grand Jury Decisions, Seattle Student Still Has Hope
Nineteen-year-old Ardo Hersi in Seattle attended a rally in response to the cases of Eric Garner and Michael Brown and the officers who killed them. She spoke with students there about their reactions. She says, “Rage is pointless if it does not fuel change and foster results.”

It can be difficult to understand how things can go so wrong with interactions between the police and the public. One question we had at Youth Radio was how the training of law enforcement officers factors into the tragic incidents we’ve seen over the past year.

To help us gain insight, we turned to Sergeant Keith Gums, a retired 23-year veteran of the Alameda County Sheriff’s Office. Gums has trained fellow officers in the tactics of modern policing.

In the wake of the decision not to indict a New York police officer in the death of Eric Garner, an unarmed black man who died after a chokehold restraint, a fresh wave of protests has been set off around the country. Youth Radio’s Nishat Kurwa reports on the origins of one phrase that showed up on protest signs all over the country, and got lots of play on social media: Black Lives Matter.

Youth Radio Podcast: Reactions To No Indictment For Darren Wilson

A number of U.S. cities erupted in protest this week after a grand jury in Ferguson, Missouri handed down a decision not to indite officer Darren Wilson in the shooting death of unarmed black teen Michael Brown in August. Youth Radio spoke to some of the protesters in Oakland about why they came out to demonstrate.

We also heard from Youth Radio alumni around the country, reacting to the grand jury decision.

Protests Overnight in Ferguson and Cities Around U.S. After Grand Jury Decision:

Protesters took to the streets of Ferguson, Missouri last night, and cities around the country, to express their anger and dismay that a grand jury did not indict Officer Darren Wilson for the fatal shooting of Michael Brown in August.

Brown was unarmed when he was killed. The shooting sparked months of protests and intense national attention to issue of police violence against youth of color.
Youth Radio has been gathering reaction to last night’s announcement from young people around the country. Check out original photos, videos, and curated stories below. 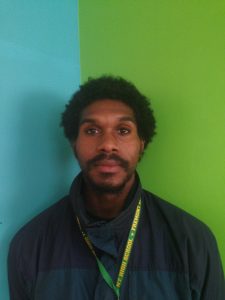 “It was vibrant energy. There were many messages given that night and different motives. I stayed closed with the people I came and trust. It felt good to see other Oakland natives that I could point out in the crowd. The climax was taking over the freeway–blocking the freeway and traffic. There was a lot of people burning trash and I saw people who are from Oakland try to put the fire out–including myself. It felt good being out there. It felt like we were really hands on and we represented those who were uncomfortable showing their support.”– Y.T, 24 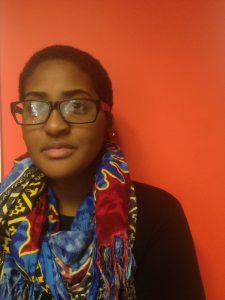 “It was wild. We knew what we were out there for but a lot of the people out were mudding up the agenda. It was chaotic, especially when we were heading to the freeway. I asked myself, ‘do I stay or do I go?’ and I went. It was the greatest moment of my life. The people in the car were mostly encouraging and getting out the car and playing music. They were high-fiving and talking to us. Even though they were stuck in traffic they were for the cause. I did get scared when arrest were being made. I heard someone say ‘he [officer] has a gun’ and that made get off the freeway. Overall, that day was unified.”– Rayana Godfrey, 20 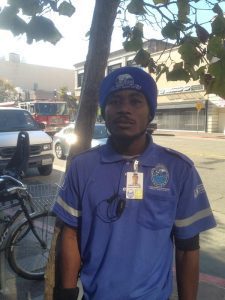 “Attention should be to the cops not business owners they’re like us. We’re taking away our own resources”– Harold 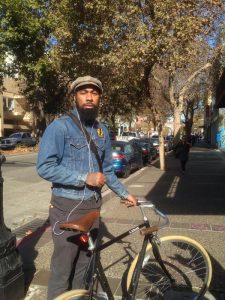 “S*#t’s been happening to us for years, its not a big surprise. The system isn’t built for us.”–@FdotStokes

The grand jury decided not to indict Officer Darren Wilson for the fatal shooting of 18-year-old Michael Brown. Our colleagues over at St. Louis Public Radio are following this story closely. Watch their live updates below. 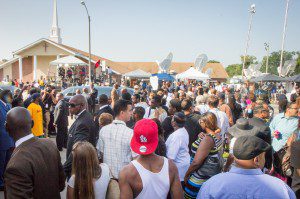 19-year-old Youth Radio reporter Rafael Johns recently graduated from high school in a suburb that is predominantly white. He says that because of what’s going on in Ferguson, his peer group has become less tolerant of mindsets that may be considered racist.

In the wake of Michael Brown’s death in Ferguson, Missouri, journalist and photographer Shirin Barghi created a series of powerful graphics. The messages are simply the last words of people shot and killed by the police. See a few below, and check out her Twitter for more. 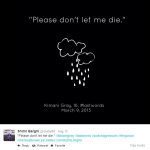 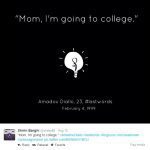 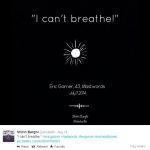 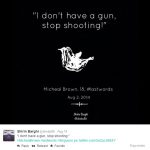 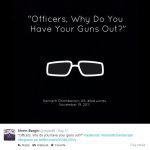 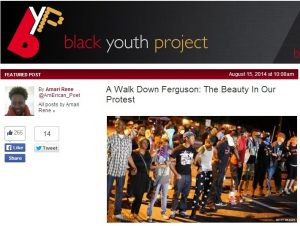 Our friends at the Black Youth Project have been covering the events in Ferguson, MO closely, helping their readers put the fatal shooting of Michael Brown in the context of ongoing police violence against young black people. 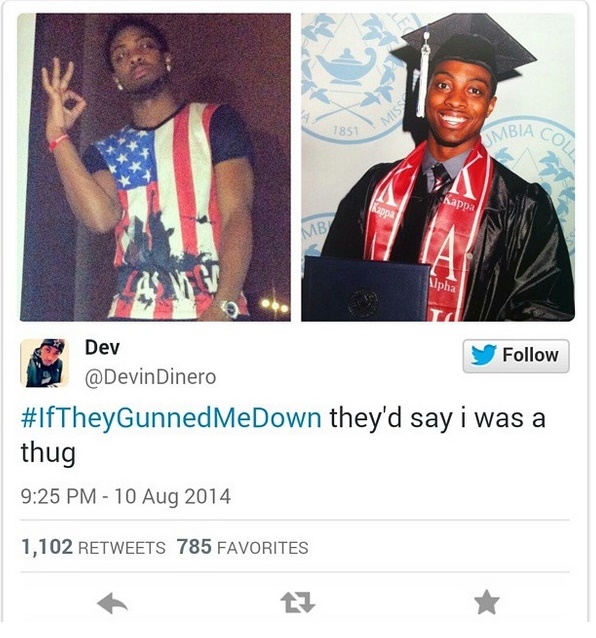 The Good And Bad Memes In #Ferguson Race Conversations

While large media outlets pick at facts and autopsies in the Michael Brown case, people all over social media are tackling deeper aspects of the issues Brown’s death raises, like self-worth. 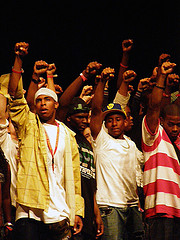 Off/Page Project Calls For Youth Poets To Write On Ferguson

Our friends at Youth Speaks launched the Off/Page Project to combine original storytelling and arts with investigative data. The project is soliciting poetry from young people that explains and expresses how Brown’s death and the nationwide response have affected their lives. 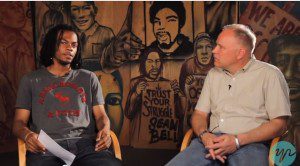 Richmond Police Chief Chris Magnus sat down with Youth Radio participant to discuss how to improve relations between young people and the police.