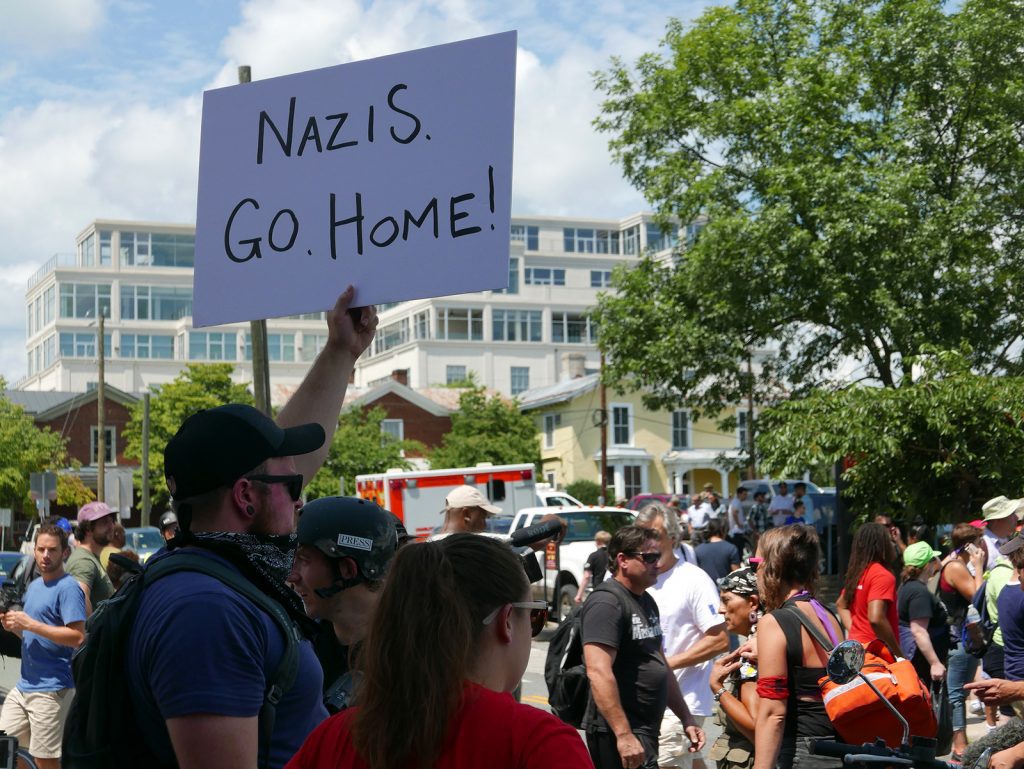 White nationalist demonstrators and counterprotesters clashed last year in Charlottesville. This weekend, one year later, events are planned in both Washington, D.C. and Charlottesville. Students are playing a prominent role in pushing back against Unite the Right 2. Photo by Susan Melkisethian via Flickr under Creative Commons licensing

It’s been exactly one year since white nationalists marched in Charlottesville, Virginia, creating chaos, violence and leading to the death of one counter protestor. Now, marchers are preparing to organize again, this time in the nation’s capital, for their “Unite the Right 2” rally — and young people are fighting back.

The Unite the Right 2 rally is expected to draw about 400 people, but the counter protests are estimated to be thousands strong. Here’s how students in D.C. and Virginia are protesting the event and fighting back against white nationalism.

GW Students “Stomp Out The Hate”

The UTR2 March will take place Sunday afternoon in Lafayette Square near the White House, and protesters are planning to take the Metro from Vienna, Virginia, to Foggy Bottom in D.C. — and could cross the George Washington University campus on their way to the rally site.

On Saturday, Aug. 11, and Sunday, Aug. 12, rally and protest activities are expected to have a major impact on the Foggy Bottom Campus. We are working in coordination with MPD and local law enforcement agencies on safety and security plans.

With the march happening so close to campus, two students at GW are organizing a fundraiser to push back. In their “Stomp Out the Hate” walkathon, students Allison Herrity and Kendall Keelen are involuntarily involving the UTR2 white nationalists to work against elves. Because for every step they take during their march, donors can pledge money to support the Southern Poverty Law Center, a legal advocacy nonprofit that documents hate groups and supports civil rights.

The organizers of “Stomp Out the Hate” have estimated that the route from the Foggy Bottom Metro Station to Lafayette Square is about 1,500 steps (just under a mile), so the donations won’t technically be based on a “per mile” route like a normal walkathon.

As organizers put it on their walkathon page,

“We would have done a per mile pledge, but the protesters will not even be walking a mile. But hey, carrying around all that hate must be exhausting.”

And before anyone has even taken a single step, the walkathon has already raised more than $900.

Politically active students at GW are also speaking out against the march. Both the College Republicans and College Democrats released statements earlier this week condemning the rally in D.C.

“There is no place for racism or discrimination in our organization, the Republican Party or the United States of America. The white supremacists rallying in D.C. this Sunday have never and will never share our values.”

The GW Democrats added that:

“White supremacy, racism, and discrimination have no place in our country especially not on our campus.”

White nationalist alt-right torchlit march going through UVA grounds: "you will not replace us" pic.twitter.com/QS8ebI9XOW

Students in the city are planning a number of events, both to commemorate last year’s losses and to fight against the UTR2 rally this weekend.

A Facebook event for “VA Students Act Against White Supremacy: Rally for Justice” has almost 1,000 people marked as “going” and “interested.” On Saturday, students will meet at the North Plaza of the Rotunda on campus and rally against white supremacy, and honor the victims of violence of last year’s Unite the Right rally in Charlottesville.

The organizers of the event, UVA Students United, wrote on their Facebook page:

“When fascists and white supremacists marched on UVA’s grounds, who was there to resist them, to fight them, to hold ground against them? It wasn’t the administration. It wasn’t the police. It was the students and community members who experience the fist of white supremacy every day of their lives. In the weeks and months, and now year, after that day, the ones who continue to fight fascism and white supremacy, wherever it materializes, are still the students and community members.”

UVA Students United also created a protest toolkit to teach students and community members how to plan a solidarity action this month. They held a webinar on July 30 to support others in planning their actions.