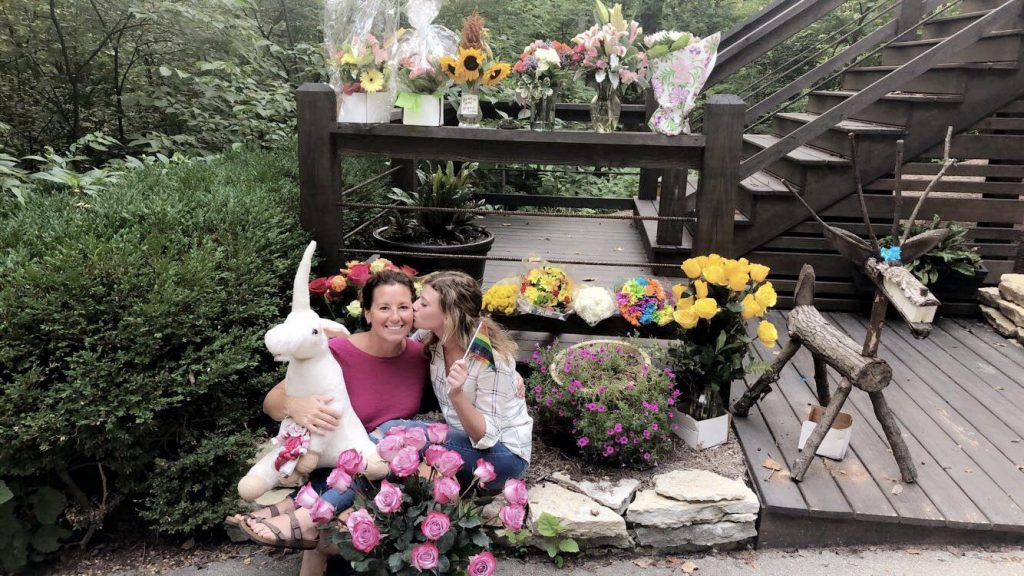 Catholic school counselor Shelly Fitzgerald (left) is being showered by flowers, as students are upset with the threat to her job. Here she poses with her niece and former student Haley Fitzgerald.  (Photo courtesy of Haley Fitzgerald.)

A counselor at a Roman Catholic high school in Indianapolis has been put on paid leave following the school’s discovery of her gay marriage — and many current and former students are rallying around her.

In a video posted by IndyStar, high school guidance counselor Shelly Fitzgerald recalls how the principal and president of Roncalli High School presented her with her marriage certificate and gave her four options: to resign, to dissolve her marriage, to not renew her contract the next year, or to face possible termination.

Hey twitter.
A highschool counselor is facing the possibility of being fired from her position at Roncalli High School for being gay and married to her wife of 22 years.
Ms. Fitzgerald deserves better after 15 years of dedication to this school.

.@SCOTUS decided same sex marriage is legal. While religious
liberty in America allows people to hold their own personal beliefs, no one
should lose their job for exercising their rights as an American—voting, worshipping, or marrying who they love. https://t.co/raP5AM6cTB

Shelly Fitzgerald has been a well-liked counselor at Roncalli High School for 15 years. It was not until the school and Archdiocese of Indianapolis discovered she was married to a woman that they suspended her.

Fitzgerald had reportedly kept her private life and relationship of 22 years a secret, knowing the Roman Catholic high school allows employees only to be in marriages involving a man and a woman.

The school’s decision to suspend Fitzgerald has outraged many of the students and community members — some of whom staged a protest at Roncalli High School on Monday.

Show of support outside Roncalli High School for counselor Shelly Fitzgerald. She’s on paid administrative leave, told by school & Archdiocese that her job is at risk because she’s married to a woman. (Pic courtesy Roncalli parent) Hear from Shelly at 5 on @WTHRcom pic.twitter.com/FO2nZ71P9a

While some legal experts are saying the Roman Catholic High School is legally allowed to fire a counselor for being in a gay marriage, the question still remains: Should they?

According to many Roncalli High School students and alumni who have taken to Twitter, the answer is no.

as someone who is openly gay and attends roncalli high school i am beyond upset to hear that they would let someone go over being married to someone they love, makes me feel like i have to hide who i am in order to succeed at rhs

roncalli fired one of their best counselors all because of her sexuality. she was an AMAZING counselor and human being and doesn’t deserve this kind of treatment from my former high school, which is supposed to represent love and appreciation and not hate or discrimination.

Dear Roncalli,
Thank you for making us sit through multiple assemblies and making it a point to say how Roncalli is SUCH an accepting place and sexuality is NEVER an issue. TEACH WHAT YOU PREACH. WE LOVE YOU SHELLY❤️?????#Isupportmsfitzgerald

What makes it more complicated is that public funding, in the form of taxpayer dollars, is providing this school with millions of dollars through a voucher program in Indiana.

So the school’s decision to suspend a longtime guidance counselor could put all that funding at risk.

The situation at Roncalli High School is EXACTLY why tax dollars for school vouchers used at private schools is a bad idea.

And Fitzgerald could face even more consequences after going public with her story and discussing what the school is referring to as a “confidential personnel matter.”

But it seems this has become bigger than just keeping a job. A Facebook group titled “Time To Be A Rebel” has been created in her defense.

And a group of students is apparently running a Twitter account called @fitzsupport, to plan continued action in support of their counselor.

WE WILL HAVE PRIDE ACCESSORIES FOR YOU AT THE GAME IF YOU CHOSE TO PARTICIPATE!!!!! I’m wearing white shorts and a t shirt then going alllllll outs with a tutu, bracelets headbands, tattoos, stickers, & socks!!!!!

Asked by a local reporter if she thinks she’ll get her job back, Fitzgerald replied, “I don’t have any expectations except to be a catalyst for change and love.”

She may not expect it, but students and alumni who have been inspired by her approach are continuing to speak out.

ms fitzgerald was the only reason i stayed at roncalli, and was such a big part of my high school experience. everyone that met her had nothing but amazing things to say about her. she deserves better ?❤️?????

I am beyond proud of the kids at roncalli for how they are rallying behind mrs. fitzgerald! this is what the church should be: love and acceptance no matter what. @roncallihigh your students and alumni are fighting for whats right! its time to start practicing what you preach

ms. fitzgerald helped me discover my passion through out my years at roncalli. she’s the reason i get to do what i love everyday. it’s hard to believe that rhs students will not have the chance to have an amazing counselor as herself . #isupportmsfitzgerald

Dear @TheEllenShow, PLEASE help Shelly Fitzgerald, my amazing HS guidance counselor. I graduated 10 yrs ago & still keep in contact w/her. They're trying to force her to divorce or resign simply because she married the woman she loves! Read my post here: https://t.co/PInXl4DZDB